Arctic melt: Threat beneath the ice

It’s spring in the Arctic, and nature in the far north is just waking up, warmed by 24 daily hours of sunlight.

Here, in the waters of the Fram Strait, between Svaalbard and Greenland, is where ice comes to die. 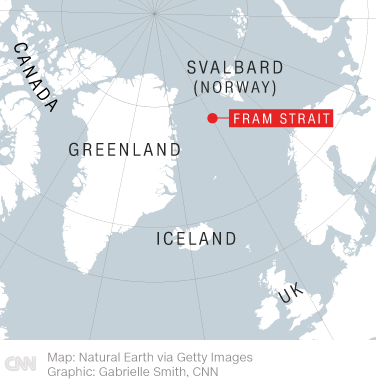 The Arctic is heating up twice as fast as the global average, causing massive melting of sea ice. But while we know climate change is warming the Arctic air, there is a lot more happening under the ice that we don’t fully understand.

A team of interdisciplinary scientists is here on a study facilitated by Greenpeace, at the start of the environmental group’s nearly year-long pole-to-pole expedition. The scientists want to learn more about this threat beneath the ice, which could potentially destroy the cycle of life that starts here, and threaten the lives of people all over the planet.

The Fram Strait is the main gateway through which sea ice leaves the Arctic Ocean.
Brice Laine/CNN

A mosaic of fractured ice

The inflatable boats carrying the scientists maneuver slowly through a sea of fractured ice, a mosaic of pieces that once were part of the Arctic ice sheet, pushed south by winds and currents into the Fram Strait.

Here, the scientists spend days working on top of the precarious ice floes, keeping a watchful eye out for polar bears while drilling into the ice to measure its thickness.

“It has definitely thinned in this area, it has thinned everywhere” says team leader, polar physicist Till Wagner, of the University of North Carolina Wilmington.

Since 1990 the thickness of sea ice here has decreased by a third, from about 3 meters to 2 meters, according to the Fram Strait Arctic Observatory.

The Fram Strait is where warm waters originating in Mexico are brought up by the Gulf Stream, flowing thousands of miles through the Atlantic to meet the Arctic ice edge. 80% of the ice movement in and out of the Arctic Ocean happens through here.

“For the longest time the story of sea ice loss has been one of the higher air temperatures melting the ice from above,” Wagner explains.

But that story may be changing.

“This warm water is at the surface as it comes up [from the south] and then it drops under the ice as it goes into the Arctic Ocean,” says Wagner. “The layer that is under the ice has been coming up closer to the surface and melting the ice from underneath.”

The researchers are trying to better understand exactly why this is happening.

A forest of microscopic life

What the sea ice melt does to the ecosystem, and to us, is at the heart of this study.

Measuring the thickness and density of a recently extracted ice core.
arwa damon/cnn

The scientists extract ice cores from the floes, which hold clues that are invisible to the naked eye.

Read: Arctic’s ‘last bastion’ of sea ice is breaking up for the first time

“Oh wow, that’s beautiful,” exclaims biological oceanographer Mattias Cape, examining a meter-long cylinder of ice. “Inside this piece of ice is this microscopic forest; all these little bubbles, these little channels are home for these microscopic organisms.”

Greenpeace’s Arctic Sunrise has been converted into a floating lab and on board, ice core samples are distilled and examined. Under the microscope the frozen clues within come to life – a kaleidoscope of sea ice algae and phytoplankton, microscopic organisms that use sunlight for energy.

Cape explains that these organisms play a vital role in reducing climate change by pulling planet-warming carbon dioxide from the atmosphere and storing it as a long-term “carbon sink.”

“They photosynthesize and take in CO2 and expel oxygen as part of the process – which is the oxygen we breathe,” he says.

They will be further tested later on land, helping us understand how sea ice loss is potentially impacting their ability to take in and sequester CO2.

These waters might look barren, but they are hugely productive when it comes to the building blocks of ocean life.

As the sea ice melts, ice algae and phytoplankton are released into the sea. In the short term, this creates something of a nutrient injection that jump starts the cycle of life in the ocean.

But this April saw a record loss of sea ice across the Arctic. Less ice ultimately puts that entire cycle at risk, with a smaller nutrient injection meaning less food further up the chain.

The team’s study confirmed their expectation.

“In the top layer [of the ocean] you see there is a ton of biomass between 10 meters and 30 meters” Wagner says.

“And then right below there is this warm water, that is almost 3.5 degrees and this is the warm Atlantic water” Cape adds.

In this warmer water, away from the ice, they found significantly less phytoplankton.

Freshly melted ice not only injects life into the water – it creates a layer of cold water that protects sea ice above from more melting.

“It isolates the ice from the hot devil water sitting at the bottom waiting to come up” Wagner explains.

Less sea ice means there will be less of that protective cold layer, leading to even more melting.

Greenpeace is traveling from the Arctic to the Antarctic to highlight the threats facing our oceans and part of its campaign for ocean sanctuaries.

With climate change and melting ice putting more pressure on Arctic sea life, the group wants more of our oceans to be set aside as protected reserves, free from commercial exploitation.

Negotiations towards a Global Ocean Treaty at the UN are under way and Greenpeace is part of a broader coalition that is campaigning for legislation that would see 30% of our oceans protected by 2030.

Inside the military base at the heart of Putin's Arctic ambitions

But it may prove to be challenging, with some powerhouse nations, including Russia and the US, looking at short term economic gains at the expense of the planet’s future.

The US has not signed on to the Law of the Sea treaty, the UN guidelines on how countries use our oceans, and Secretary of State Mike Pompeo recently hailed the economic opportunities presented by shrinking levels of sea ice opening up shipping lanes and a wealth of natural resources.

“It’s tragic to hear something like that and I think this is an extreme case of cherry picking because obviously you can find small individual good things about climate change but in the broad perspective the negative downside of this to us as humans, the environment, the ocean, will outweigh the small potential benefits substantially,” says Scheller.

As the ship heads further south, we come across red streaks of blood across the ice, the bloody aftermath of a polar bear kill.

The absence of sea ice doesn’t just threaten the top of the food chain, or the beluga whales we watch gently dipping along the ice edge, their deep breaths echoing across the silence of this remote region. Sea ice loss will impact us all, in ways that science is racing to understand.