Weapons and copies of Chinese travel documents seized during the investigation of US Customs and Border Protection supervisor Wei Xu.

"Weapons of war," a prosecutor would later call them.
Xu, 56, was arrested and charged with dealing firearms without a license. He has pleaded not guilty. 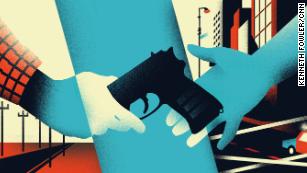 One gun's path to destruction
But guns are not the reason the veteran officer has been held without bond since his arrest four months ago.
Instead, the Chinese-born naturalized US citizen has remained behind bars amid concerns about his secret-level security clearance and what prosecutors described as "highly suspicious" contacts with Chinese consular officials in Los Angeles.
Read More
Prosecutors are also examining the apparent gulf between Xu's estimated $120,000-to-$130,000 salary as a federal law enforcement officer and his "luxurious lifestyle," in which he drove a Maserati, went on big game hunting trips to Africa and had approximately $1.4 million in the bank, according to court records. The cache of weapons recovered from Xu's house was estimated to be worth more than $200,000, according to prosecutors. Additionally, prosecutors allege that Xu and his wife failed to report several years of income from a rental property they've owned since 2015.
Xu's defense attorney, Mark Werksman, said in court papers that his client has lived in the United States for three decades, has no previous criminal record, and, because his passport was seized as part of the investigation, has no ability to travel outside the country.
The lawyer was unsuccessful, however, in his attempt to convince a federal judge at a hearing last month that Xu could be trusted to show up for trial if he was released. The hearing marked the third time Xu's request for bond was denied.
Annamartine Salick, deputy chief of the Terrorism and Export Crime Section of the US Attorney's office in Los Angeles and the lead prosecutor on the case against Xu, declined comment.
In a court filing, she cited Xu's "litany of lies and contempt for the rule of law" as among the reasons he should be denied bond.
Jack Weiss, a former federal prosecutor in Los Angeles who now runs an investigative firm, said the allegations against Xu are especially troubling given his role in law enforcement.
"This is someone you would never want in a position of authority in the US government," Weiss said. "I imagine there is going to be some kind of internal review as to how it is that he was wearing a badge."
Born in China, Xu came to the United States on a student visa in the late 1980s. He became a naturalized citizen in 1999. In 2004, following stints in the private sector as an engineer and entrepreneur, he was hired by Customs and Border Protection -- a job requiring a secret-level security clearance subject to periodic renewals.
Prior to his arrest in February, Xu worked as a watch commander for CBP at the ports of Los Angeles and Long Beach.
Jaime Ruiz, a spokesman for US Customs and Border Protection, said Xu is now on "indefinite suspension."
According to prosecutors, Xu repeatedly made false statements and concealed information when he filled out questionnaires for his security clearance under penalty of perjury.
Among other things, prosecutors said, Xu failed to disclose his ownership of two companies that do business with China and his "extensive business contacts with Chinese nationals."
Agents say they found evidence of a bank account in China in the trash outside Xu's home and recovered two copies of Chinese passports, bearing the name Wei Xu but featuring photos of other people, from Xu's desk.
Salick argued at one of Xu's detention hearings that she'd been told by CBP officers that if Xu falsely claimed to have lost his own passport, he could pretend to be one of the Chinese citizens bearing his name, provide that man's biographical information to the Chinese consulate, and would likely be issued travel documents to return to China.
Following Xu's arrest, investigators learned of his "long-standing contact with members of the Consulate General of the People's Republic of China in Los Angeles," according to court records.
Agents seized emails, texts and phone records showing that Xu had been communicating with consular officials since at least 2013, according to court records. He was invited to events hosted by the consulate in 2017 and 2018, the records state, and agents reviewed images on his cell phone "appearing to show" that Xu and his wife attended the events.
Attempts to reach Chinese consular officials in Los Angeles were not immediately successful.
Werksman downplayed his client's purported wealth in a brief interview with CNN, saying, for example, that the Maserati was leased. He said Xu's companies exported forklift parts and generated limited income. He said the Chinese bank account authorities discovered was opened 20 years ago and contained the relatively meager sum of $1,700.
He also dismissed any intrigue surrounding Xu's ties to China.
He said in a court filing that the photocopies of passports seized from his office were placed there by co-workers playing a prank on Xu, whose duties include overseeing entry and exit of Chinese vessels in San Pedro, and who was at one point investigating two men who had the same -- very common -- first and last name that he did.
He said Xu's contact with consular officials was related to his work at the port, in which he sometimes contacted the consulate about crewmembers on Chinese ships who were seeking asylum in the United States.
"There's nothing nefarious about it," he told CNN.
It was while investigating Xu regarding his security clearance that agents discovered his a