(CNN)Morgan Jones was close to starving. It was 1660 and he and his boat crew had been stranded at Oyster Point, in modern-day South Carolina, for almost eight months, running low on food with no hope of rescue.

Eventually, Jones and five others set out "through the wilderness" for British colonies in the north, but were detained as they passed through the territory of a local indigenous tribe.
"That night they carried us to their town and shut us up close to our no small dread," Jones wrote in an account of his journey published years later.
Told they were to be executed, Jones cried out in his native language, Welsh: "Have I escaped so many dangers and must I now be knocked on the head like a dog?"
One of his captors then approached him and said, "in the British tongue" that Jones "should not die." Instead, he took him to his home, where Jones happily conversed "with them familiarly in the British (Welsh) language and did preach to them three times a week in the same language."
Pages from "An enquiry into the truth of the tradition concerning the Discovery of America, By Prince Madog ab Owen Gwynedd, about the year, 1170," by historian John Williams, published in 1791.
Read More
After almost a month, Jones returned to his home in New York and wrote to a fellow clergyman, Thomas Lloyd of Pennsylvania, promising to "conduct any Welshman" to the place he had met their American co-linguists.
Jones' account reignited interest in a more than half-a-century-old story popular on both sides of the Atlantic that Christopher Columbus had been beaten to the Americas by almost 300 years by a Welsh prince, and that therefore the New World belonged not to the Spanish crown but to the English. The rights of indigenous people who had been there for millennia not deemed worth considering.
Proof of this account was purported to be found in existence of Welsh-speaking communities living in America. The hunt for these so-called "white Indians," who looked and spoke like Europeans, was an obsession for many early settlers, including explorers, priests and journalists -- even Thomas Jefferson, the country's third president.
At its root was not only a rivalry between England and Spain, but also a deep seated racism that sought alternative explanations for how supposedly primitive indigenous people had conquered the Americas and built grand civilizations throughout, the remnants of which European settlers were finding as they spread throughout the continents.

The story goes something like this. In 1170, Owain, ruler of the Kingdom of Gwynedd, in what is now north Wales, died. His sons quickly set about contesting the succession and plunged the country into civil war.
One of Owain's youngest sons, Madog, was disgusted by the fighting and set off in search of something better. As Humphrey Llwyd put it in his 1584 history, "Cronica Walliae," Madog "left the land in contention betwixt his brethren, and prepared certaine ships with men and munition, and sought adventures by seas, sailing West, and leaving the coast of Ireland so far north, that he came to a land unknowen, where he saw manie strange things."
Finding the land lush and plentiful, Madog reportedly left a small number of his crew there to build a settlement and returned to Wales, where he gathered more followers and ships and set off west again, never to return.
The land which Madog sailed to, Llwyd wrote, "must needs be some part of that countrie of which the Spaniardes affirme themselves to be the first finders."
"It is manifest, that that countrie was long before by Brytaines discovered, afore either Columbus or Americus Vesputius lead anie Spaniards thither," he said, referring to the Italian explorer Amerigo Vespucci, whose Latin moniker gave the continents their modern names.
An extract from Humphrey Llwyd's 1584 history, "Cronica Walliae," which recounts part of the Madog myth.

Determined to prove the veracity of the Madog story -- and therefore a claim that pre-dated that made by Columbus in 1492 for the Spanish crown -- early British colonizers, who had begun arriving in the early 1600s, set about looking for evidence of ancient Welsh settlements.
As British explorers moved out from the original Jamestown settlement in modern-day Virginia and came into contact with more and more indigenous peoples, word spread that at least one tribe spoke a language similar to Welsh.
In 1791, John Williams, a Welsh Presbyterian minister, wrote that "words in common use on different parts of the continent, which are very near, or undeniably Welsh, in both sound and sense, could not happen by chance, and they could not be derived from any Europeans but from the Ancient Britons."
While some of these words did appear to have similarities to Welsh -- such as both using "bara" for bread and "croeso" for welcome -- which Williams said were already used by the Mexicans when their country was discovered by the Spaniards. Williams, and other early historians, ignored that the translation of the vast majority of terms with similarities often didn't make sense. There was much excitement, for example, that penguin sounded like "pen gwyn" -- white head, in Welsh -- despite the fact that a penguin's head is black.
"There is extensive literature on travelers discovering American Indians who were fluent in some European or Asiatic language," Samuel Eliot Morison wrote in in his history of European settlement of North America. "Uneducated travelers were apt to regard every Indian language as gibberish, and so compared it with some known language such as Welsh, Basque, Hebrew, or Finnish, that was also gibberish to them."
A 1606 map of the British colony of Virginia, as described by Captain John Smith.

Jones' story was given the less-than-neutral headline "The Crown of England's Title to America prior to that of Spain" when it first appeared in the Gentleman's Magazine, a popular London periodical. It caused a sensation in the UK, emboldening both those who sought to claim the Americas for England, and those who saw any evidence of indigenous advancement as proof of European heritage.
Following the American Revolution of 1783, interest in the "Welsh Indians" continued among residents of the newly independent States. As the US expanded its territory westward, many assumed they would eventually encounter the tribe of ancient Britons.
In an 1804 letter to explorer Meriweather Lewis, then President Thomas Jefferson enclosed a map created by John Evans, who had been employed several years earlier by the Spanish colonial authorities to graph their new territory, "but whose original object I believe had been to go in search of the Welsh Indians, said to be up the Missouri."
But while he may have been remembered by Jefferson for his search for the Welsh Indians, Evans was actually among the first to poke a hole in the myth.
"The hunt for the Welsh Indians had moved westward with Anglo-American settlement," Elizabeth Fenn writes in "Encounters at the Heart of the World," her history of the Mandan people, an Indian nation long believed to be descended from Europeans. "By 1794, its focus had narrowed to two Indian peoples: the Apaches of the Southwest and the Mandans of the upper Missouri." 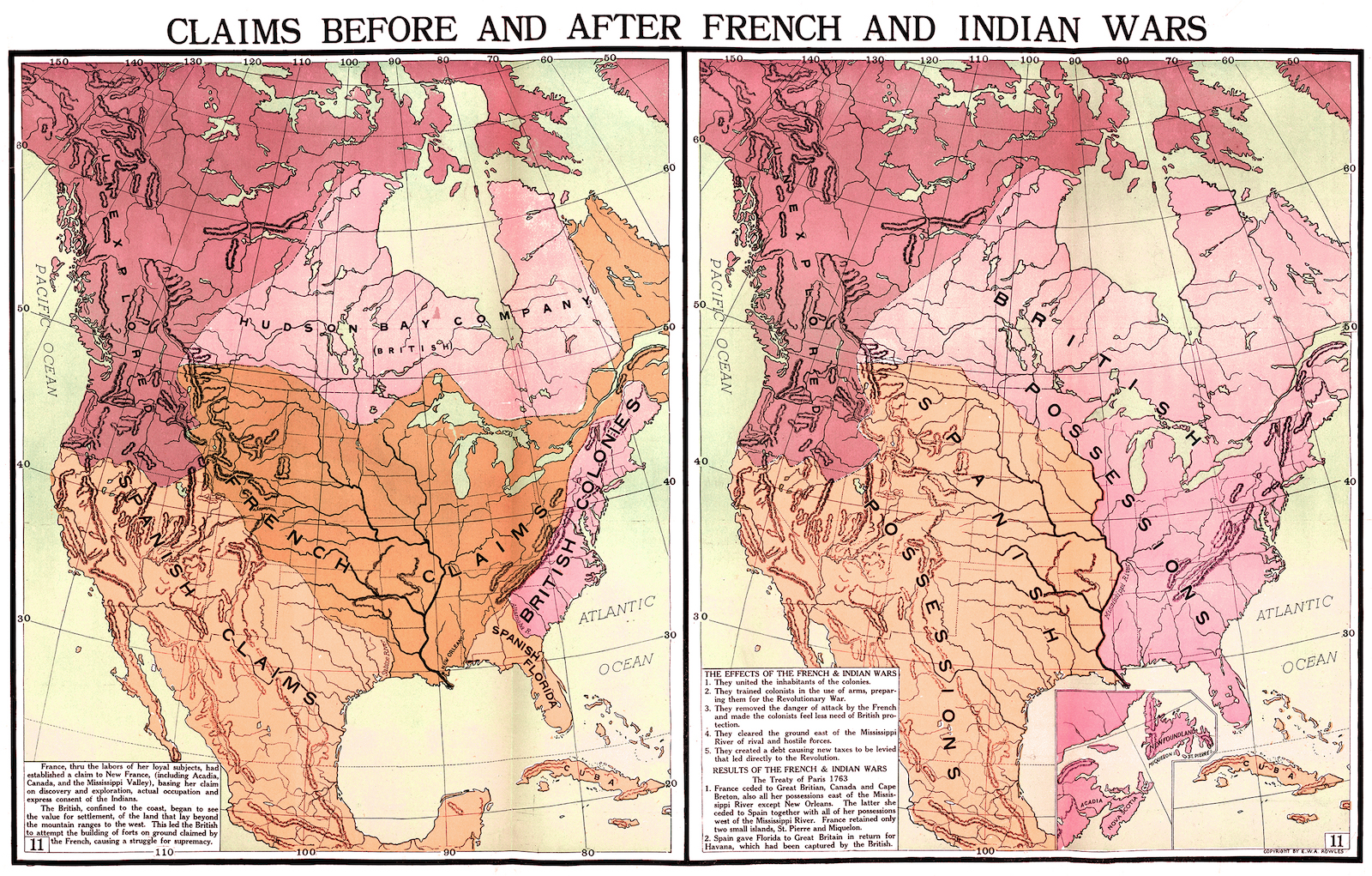 A map showing various countries' North American claims around the French and Indian Wars of 1763.
Born in North Wales near Caernarfon, Evans was an explorer and mapmaker working for the Spanish crown in its American territories. While he carried out his work, however, he was also, according to Fenn, "hell-bent on ascending the Missouri River to find the Welsh Indians."
From 1795, Evans spent two years exploring and mapping the northern reaches of the Missouri, looking for a route to the Pacific. But while he did meet the Mandan people, he did not uncover any evidence of European heritage.
It was later reported that he had concluded such people did not exist.
The increasing volume of experiences like that of Evans with non-Welsh-speaking indigenous peoples throughout North America, should have been the end of it, but the myth proved surprisingly persistent.
Evans' critics claimed that he had lied to protect the territorial claims of his Spanish paymasters, and stories of Madog continued into the 20th century.
"John Evans proved that Madoc is myth, which is an unpopular assumption to make," one of his descendants, Gruff Rhys, frontman of Welsh rockband Super Furry Animals, said in 2014.
Rhys' album "American Interior" focuses on Evans' explorations and his debunking of the Madog tales.
"He's an incredibly brave and romantic figure, who is almost beyond classification. His story is quite unique," the musician told the BBC. "He failed in some ways but it's a glorious failure."
American explorer Richard Marsh poses with three "white Indians" he discovered in Panama and brought with him to Washington in 1924.
<div class="zn-body__paragraph" data-paragraph-id="paragraph_8AA95A34-4FDF-C7B1-5F74-DAAEA9353A78"