A teenager from Ireland may have found a way to rescue our oceans from the growing plastic pollution problem.

A walk on the beach led Fionn Ferreira to develop his project on microplastic extraction from water for the annual Google Science Fair. The project won the grand prize of $50,000 in educational funding at this year’s event.

The 18-year-old said that while he was out on that walk in his coastal hometown of Ballydehob, he ran across a stone with oil and plastic stuck to it – something he says he’s become more aware of in recent years.

“I was alarmed to find out how many microplastics enter our wastewater system and consequently the oceans,” he wrote in his project. That’s what got Ferreira thinking about how to develop a new extraction method.

The Google Science Fair has been crowning winners for eight years with the help of sponsors like Lego, Scientific American, National Geographic and Virgin Galactic. Students 13 through 18 from around the world are encouraged to submit and present science and technology experiments and results to a panel of judges.

How to remove microplastics

Microplastics are pieces of plastic that are typically less than 5 millimeters long, according to the National Oceanic and Atmospheric Administration.

The agency says plastic is the most common type of marine debris found in our oceans and Great Lakes. In even smaller pieces, it’s used as an exfoliator in face wash, body scrubs and toothpaste.

Because of the tiny size of these microplastics, they’re able to pass through water filtration systems and ultimately harm marine life and damage oceans.

Americans alone eat, drink and breathe between 74,000 and 121,000 microplastic particles each year depending on their age and sex, according to a recent study. If you drink bottled water only instead of tap water, you can add up to 90,000 plastic particles to your estimated intake.

Are you eating plastic?

In the presence of water, ferrofluids – nontoxic magnetic liquids made up of oil and magnetite, an iron- based rock mineral – attract the microplastics because both have similar properties.

For his project, Ferreira added oil and magnetite to water and mixed in a solution emulating plastic waste in the ocean.

When the microplastics latched on to the ferrofluids, Ferreira dipped a magnet into the solution three times to remove both substances, leaving clear water.

The extraction of microplastics from water using ferro-fluids 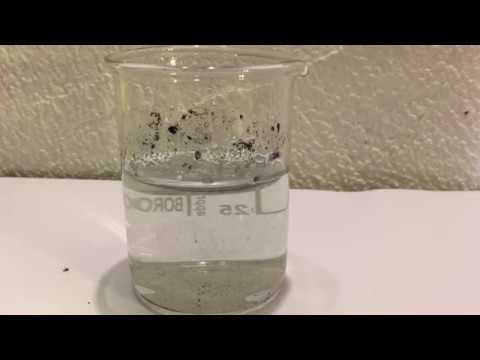 After a little over 950 tests, the method was 88% effective in removing a variety of microplastics from water, surpassing Ferreira’s original hypothesis of an 85% removal rate.

Ferreira said his passion for science and technology came from his curiosity around nature and the environment. He’s excited to further his education at the University of Groningen’s Stratingh Institute for Chemistry in the Netherlands starting in the fall.

The amount of plastic in the ocean is a lot worse than we thought, study says

Because he lives in a remote part of Ireland, testing resources can be scarce, he said. But that didn’t stop him from accomplishing his goal. He just worked around it.

“I want to encourage others by saying you don’t have to test everything in a professional lab,” he said. “That’s why I built my own equipment.”

Ferreira said his parents are happy at his accomplishment – and because they don’t have to fund as much of his college tuition, thanks to the prize money.