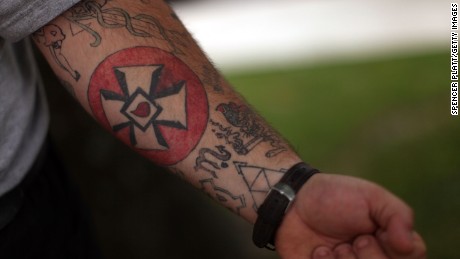 These are the new symbols of hate

(CNN)The swastikas. The bolts. The bastardized crosses. While polite society may want to believe these well-trodden images are anachronisms, the truth is these brands of hate are surprisingly enduring. And, like any other brand, they are also subject to evolution and changing tastes.

This is how the use of hate symbols is evolving, and how people hide them in plain sight.

In September 2019, the Anti-Defamation League released an updated list of hate-related symbols, hand signs and numbers. Among them was a familiar, seemingly innocent gesture: the "OK" sign.
According to the ADL, the symbol was first created as a hoax or meme among alt-right groups, who wanted other people and the media to get upset about it and thus look foolish condemning an innocuous symbol. Why the "OK? sign? The general idea is that the looped and extended fingers resemble the letters W and P, standing for "white power."
Read More
The joke caught on among trolls, and there have been several instances of people being disciplined after showing the sign on camera or in public. When Australian white supremacist Brenton Tarrant was pictured flashing the symbol in a court appearance after killing 51 people at two New Zealand mosques, any irony in the gesture was effectively erased.
Like other symbols in this article, a lot of what determines whether the "OK" sign is a hate symbol is the context in which it is used.

Mark Pitcavage is a senior research fellow at the Anti-Defamation League's Center on Extremism. He studies extreme right-wing groups and maintains the ADL's hate symbols database. He wants you to know, right off the bat, that nothing will ever top the swastika when it comes to hate.
"The Nazis have such brand name power that they are going to be dominating white supremacist symbology for a century to come," he says.
But there is risk in this hyper-visibility. Last year, a large neo-Nazi group called the National Socialist Movement announced it would be shedding depictions of the swastika in what their leader told The New York Times was "an attempt to become more integrated and more mainstream."
As a replacement, the NSM chose the Othala Rune, an pre-Roman symbol co-opted by Nazi Germany.
The rune, an innocent symbol outside of its appropriation by white supremacists, is related to ideas of "homeland" and "inheritance." It is also rooted in Germanic and pagan Viking cultures, two things that white supremacists love.
"The Nazis believed that Scandinavians were pure Aryans, just like Germans were," Pitcavage says.
While Othala runes are on their way in, other time-tested symbols are on their way out.
The iron cross used to be a widely-used hate symbol that harkened back to the Nazi era, but lost its potency in the '90s and early 2000s when surf, skate and motorcycle companies started using similar-looking images in their branding.

People who employ hate symbols typically want their ideologies known, but not so much that they'll be criticized or shunned. It presents an interesting creative challenge.
Pitcavage breaks it down:
When people have a hate symbol they tend to want to use them in one of three ways, and they are not mutually exclusive.

1. They want to openly proclaim their affiliation to the cause

2. They want to use the symbols to strike fear into the hearts of their enemies, or as an agent of intimidation.

3. They may use them internally, as codes and images that will have significance only to each others.

Still, most people seek what Pitcavage calls a "controlled display:" A swastika on their back that's only visible when they take off their shirt; or a tattoo on the inside of the lower lip.
But, sometimes, followers of hate groups will obscure symbols altogether, so they only make sense to people that have similar ideological literacy.
"One thing I see every once in a while is a 1488 represented with a pair of dice," Pitcavage says.
1488 is a combination of two numerical ideas: The 14 refers to the "14 Words" of a popular white supremacist slogan, and "88" refers to "Heil Hitler" (H is the 8th letter in the alphabet).
The Nazis don't