An incredibly rare yellow cardinal has been spotted in Florida. An expert says it’s ‘one in a million’

An extremely rare yellow northern cardinal was spotted in Port St. Lucie, Florida, exciting bird enthusiasts and drawing in anyone who can appreciate a good bird photo.

While there is no precise number for how many yellow cardinals are spotted a year, Geoff Hill, a professor and a self-described “curator of birds” at Auburn University, estimates the chances of seeing a yellow cardinal are “one in a million.”

Tracy Workman, an art teacher and photographer, spotted the little bird in her backyard and quickly snapped a few pictures before leaving the house.

“My first thought as the yellow thing fluttered out of the bush by my front door was, ‘Did I just see a yellow cardinal? There’s no way!’” she told CNN.

After posting the photos on Facebook, she learned how rare her find is and has been careful not to share where she lives so hopeful birdwatchers don’t start flocking to her neighborhood.

A bird so famous needs a name, so Workman has dubbed the flighty friend “Sunny,” explaining in a Facebook comment that it is “the obvious name for the only yellow cardinal reported in Florida.”

Sunny may be a rare occurrence, but Workman has him to brighten up her backyard whenever he pleases. She recently posted a video on YouTube of the tiny celebrity hopping around in her plants.

Sunny the Yellow Cardinal in the Jasmine 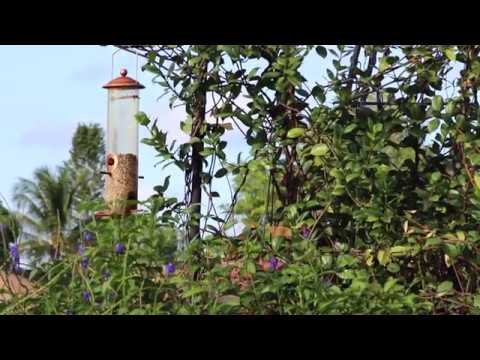 Red cardinals are one of the most abundant birds in the southeastern United States, according to Hill.

Male cardinals are typically red and females a yellowish red. But the vibrant yellow plumage of Workman’s backyard bird is incredibly uncommon.

He says that the bird’s unusual coloring is likely the result of a genetic mutation that prevents it from converting yellow pigments to red ones.

Hill has dedicated his life to researching birds but has never set eyes on a wild yellow cardinal.