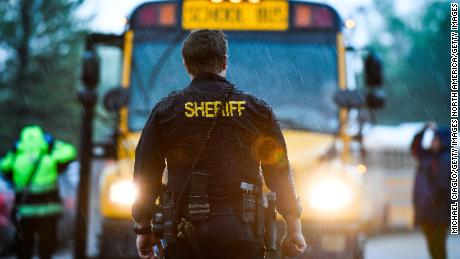 In 46 weeks this year, there have been 45 school shootings

(CNN)They have taken place across the country. From Georgia to California. At elementary, middle and high schools. On college and university campuses.

In 46 weeks this year, there have been 45 school shootings. That's nearly an average of one school shooting a week.
Of those, 32 of them were at facilities serving Kindergarten through 12th grade.
Since there is no single definition for what qualifies as a school shooting, CNN set the following parameters:
Read More

Gunfire erupted at a high school football game, injuring an adult and two minors. Five men were charged.
"Unlike some of the shootings that have occurred on school premises throughout the country, this incident had nothing to do with the students of Pleasantville High School or Camden High School," Atlantic County Prosecutor Damon G. Tyner said.
"The venue simply presented an opportunity for criminals to pursue their own form of petty vengeance against one another."

Two students were killed and three injured in a shooting at Saugus High School. The 16-year-old shooter turned the gun on himself and died in a hospital the next day.

A 19-year-old student was shot by a masked gunman while getting out of a car at Achievement Academy, a high school. His injuries were non-life-threatening. Authorities believe an altercation occurred between the victim and shooter.

A man was shot in the leg outside a dorm on the Langston University campus. He was taken via helicopter to an Oklahoma City hospital.

A University of Central Missouri student was shot and killed after a gun was accidentally discharged in an on-campus apartment.

A 30-year-old student was shot in the chest and killed in a Texas State Technical College housing facility. Police believe the 20-year-old shooter and the victim were involved in a relationship dispute that turned into a physical fight.

A 22-year-old man was shot and killed outside an Austin Peay State University residence hall. Police believe the incident was a drug deal gone wrong.

A 38-year-old woman was shot during a nighttime gathering in the parking lot of Laurel Woods Elementary School, police say.

A 16-year-old student was shot by another student outside Ridgway High School in what police believe to be a gang-related incident. The victim was taken to the hospital and later released.

A student and a police officer were shot and injured in a Grambling State University assembly center. During an event, two men were involved in an altercation when one produced a gun and shot the other twice in the chest. As police tried to intervene, an officer was shot in the leg.
Both victims were transported to the hospital. The officer sustained non-life-threatening injuries, while the other man was in critical condition.

A 19-year-old student was shot in the abdomen and killed in a Tennessee State University dorm. The incident occurred after an 18-year-old classmate discharged a stolen gun he was playing with. The shooter and victim thought the gun was a pellet gun.

After a football game at Rayne High School's stadium let out, multiple shots were fired into the parking lot, according to police. One person was hit and taken to the hospital. Police have arrested the men believed to be involved in the shooting.

A gun was discharged after school hours at Westbury High School, injuring one student.

Two women were shot outside a South Carolina State University residential building, according to university officials. Their injuries were not life-threatening.

A 20-year-old former college football player was found with numerous gunshot wounds on Fayetteville State University's campus. He was taken to the hospital in serious condition.

A woman and a girl were injured when a fight between a group of parents led to a shooting at an Eastern Hills Elementary School football game, police said.
<div class="zn-body__paragraph" data-para