But this year, a family-made ad, starring a hardware store owner’s 2-year-old son and costing a mere $130 to make, has captured the hearts of viewers around the world.

Pay it forward with these 20 holiday gifts that give back

Tom Jones, who runs family-owned Haford Hardware store in Rhayader, Wales, has been making seasonal ads and posting them on social media for three years. This year’s commercial stars his 2-year-old son Arthur, and follows him as he helps out in the store over the Christmas period. 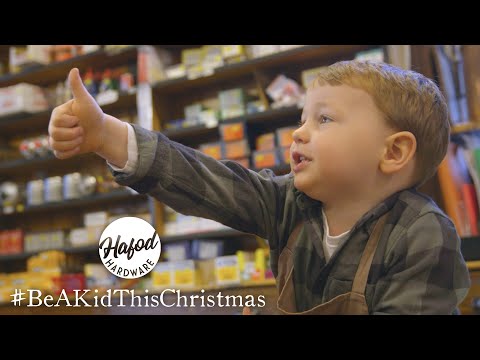 “We’ve had a great response these last two years, but nothing like this year. It’s just been crazy,” Jones told CNN.

“We just make it for fun, really. We try and put a bit of a spotlight on small independent businesses that you get in rural areas where we are, and we try and show that we can offer just as much as your high street chains,” he added.

Jones filmed the advert with his best friend, Josh Holdaway. The pair shot and edited the film in a day, and spent just £100 ($130) on the video. The money went on a recording studio and sound engineer for the ad’s soundtrack – a dreamy version of Alphaville’s 1984 hit “Forever Young.”

“Arthur was brilliant – the jobs he was doing in the video were not out of the ordinary,” Jones told CNN. “He comes to the shop most days and tries to help out.”

Jones said he was delighted with the reaction to the film. “I’m going to cherish it for the rest of my life,” he added.