“Goo goo ga ga? Are wu my widdle baby?” If your idea of “baby talk” makes you throw up in your mouth a little, then it’s time to get educated.

This is your child's brain on books: Scans show benefit of reading vs. screen time

“It uses real words and correct grammar, but it does use a higher pitch, a slower tempo and an exaggerated intonation,” said Naja Ferjan Ramirez, an assistant professor at the department of linguistics at the University of Washington.

“What people think of as baby talk is a combination of silly sounds and words, sometimes with incorrect grammar,” Ferjan Ramirez explained, “like ‘Oooh, your shozie wozies on your widdle feets.’ “

‘Not just listening but talking’

A parenting speaking style that is used in nearly every language in the world, true “baby talk” became known as “motherese” and today is called “parentese” – because, after all, it’s not just moms who use it. Many dads, grandparents, older siblings, aunts, uncles and babysitters speak parentese, intuitively aware that it helps the baby tune in socially and respond, even if only through babbling.

“Parentese has three characteristics,” said Patricia Kuhl, the co-director of the Institute for Learning & Brain Sciences at the University of Washington, who has been studying children’s early language learning for decades.

“One of them is that it has a higher overall pitch, about an octave higher,” Kuhl said. “Another is that intonation contours are very curvy; the highs are higher, the lows are lower, and it sounds excited and happy.

Close-up of a toddler and mother using a touch screen tablet.
blackred/Getty Images

Explosive growth in screen use by toddlers, studies say

“And then it’s slower, with pauses between phrases to give the baby time to participate in this social interaction,” Kuhl said.

As it turns out, encouraging the “social brain” is key to boosting a baby’s speech and language development, said Kuhl, an internationally known pioneer in the use of brain imaging.

And babies instinctively prefer it – as if they are wired to respond. Maybe they are.

Kuhl shared a video from an older experiment starring 7-month-old “Paul” to illustrate a baby’s preference for parentese.

In the black and white video, Paul sits on his mother’s lap in an enclosed space. On Paul’s left side, out of site behind a wall, a woman speaks eight seconds of parentese. On his right, a woman speaks in a normal adult tone. Paul samples both, then consistently prefers the voice speaking parentese.

Kuhl’s lab has done studies which show when infants listen to speech, “not only does the auditory cortex area in their brain light up, but the motor areas that will eventually speak light up,” she said, showing the baby is getting ready to talk back.

“The more parents naturally use parentese in their homes when speaking to their children, the better and faster those language skills develop,” Kuhl said. “So, it turns out that parentese is a social catalyst for language. It gets kids not just listening but talking.”

Can you boost parentese with coaching?

In 2018, Kuhl and Ferjan Ramirez published a study that showed when parents were coached in parentese, their babies babbled more and had more words by 14 months than those who were not trained. 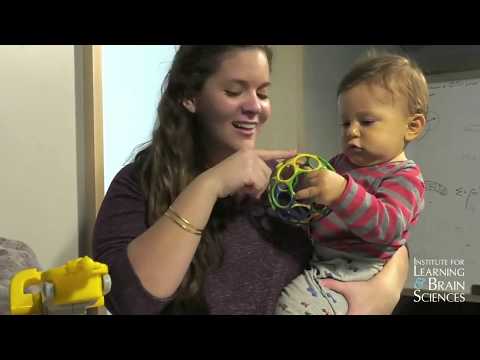 In a new study published Monday in the Proceedings of the National Academy of Sciences, the team reports on speech development in the same group of babies at 18 months. Despite the fact that all 48 participating families used some parentese at the start of the study, it was the babies of coached parents who showed significant gains in conversational turn-taking and vocalizations between 14 and 18 months.

“Children of coached parents produced real words, such as ball or milk, at almost twice the rate of children whose parents were in the control group,” Ferjan Ramirez said.

In addition, she said, babies whose parents were coached had an average vocabulary of 100 words compared to the 60 words in the control group.

Just how did researchers measure the improvement over this period? For an entire weekend when the babies were 6, 10, 14 and 18-months old, all 48 sets of parents dressed their babies with vests with built-in audio recorders that captured all of their interactions.

Nearly all toddlers, and the majority of babies, eat too much added sugar in the US, study says

Then parents randomly assigned to receive instruction then came into the lab for one-on-one coaching when their baby was 6, 10 and 14 months.

After receiving education on the science behind the benefits of speaking to their babies, the parents also listened to themselves using parentese. They were also coached on how to incorporate more parentese into the day, and encouraged to engage their babies in back-and-forth exchanges called conversational turns.

In the lab, an interaction is counted as a “turn” if the baby responds with an utterance within a second or two, Kuhl explained, with more turn-taking highly correlated with the baby’s future success in language.

“Babies need to be engaged socially in order to learn language. They have to have a drive to communicate. They have to want to, and parentese seems to help make them want to,” Kuhl said.

The study is continuing. At this time the babies are about three, old enough to undergo brain imaging with new MRIs that, Kuhl stresses, are quite safe at that age. While publication of any new findings will take time, Kuhl is encouraged.

“Measures of language skill continue to show that the kids in the coached group are way ahead of the kids in the control group,” Kuhl said. “And scans of white and gray matter in the brain will show if there are permanent changes induced by this style of interacting with a child.

“Have we strengthened the connectivity between the areas of the brain responsible for language development?” Kuhl asked. “I’ll be very interested to find out.”