That’s why Virdie Montgomery, principal of Wylie High School, spent 80 hours driving 800 miles over 12 days to 612 of his senior students. Wylie is about 28 miles outside of Dallas.

With the help of his wife, Montgomery told CNN, he was motivated to do these senior visits after looking at the calendar and realizing all the senior events that had to be canceled because of Texas’ stay-at-home orders over the coronavirus pandemic.

“We’re a pretty tradition-laden school,” he said. “These kids have seen everything that seniors before them got to do and man, they were just on the floor.”

Wanting to make his students’ senior year as memorable as possible, Montgomery endured long days filled with Google Maps and hours on the road.

Montgomery said he’d post the streets he planned to visit the day before so students had some sort of idea of where he was and when. The adventures usually started at 10 a.m. and wrapped up around 5 or 6 p.m., he said.

“Even now that I’ve done this, you still have that ‘what else can I do’ feeling, because I know how they feel, I know they feel like they’re missing out,” the principal said.

Lauren Gurley, a graduating senior, told CNN having her principal visit her at home was so special – especially because she said the transition out of school to an online format has been a difficult one for her.

“It kind of shows people that somebody does care for you out there,” she said. “Most principals wouldn’t do that.”

Before the stay-at-home orders, Gurley said, she knew Montgomery loved building strong relationships with his students, but these visits “kinda put it over the top.”

The social media savvy principal said he’s always been an active poster, so it was only natural for him to document his efforts on Facebook, Twitter and YouTube.

“The most valuable gift any of us can give anyone that isn’t replaceable is time,” Montgomery tweeted. “Where one spends one’s time says a lot about what they value. My wife spent 80 hours driving me 800 miles over the last 12 days to visit seniors all the while navigating. I love her so much.”

On Wednesday Montgomery posted a roundup of some of his senior visits now that he’s finished seeing over 600 of his students. 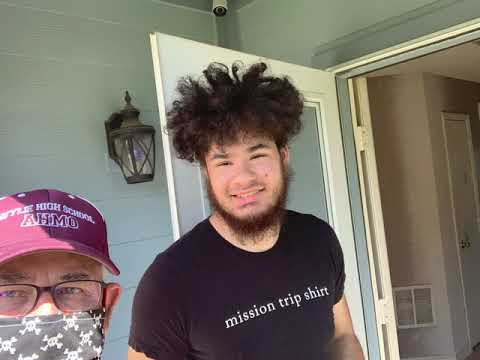 In an effort to maintain some sense of routine, Montgomery posts what he calls “Corona Chronicles,” which was formerly known as the school’s morning announcements on his YouTube page.

“It’s a sense of normalcy, something we do every day,” he said. “And that’s really what my students were seeking.”