Matt Damon has revealed that his daughter tested positive to Covid-19 in New York City, while he and the rest of his family have spent lockdown in Ireland.

Speaking by video call to Irish radio station SPIN 1038, Damon revealed that he and his wife have spent the last two months with their younger children in the affluent coastal Dublin suburb of Dalkey – while their eldest daughter and her college roommate battled the virus in New York City. The pair have since recovered, he said. 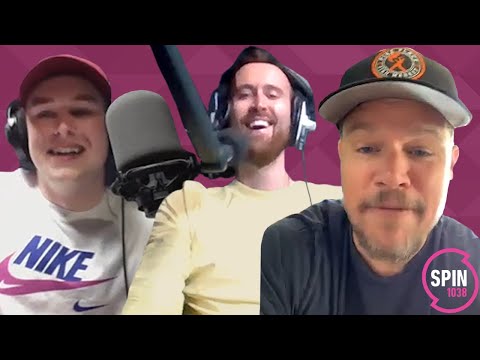 The “Good Will Hunting” star arrived in Ireland in early March to work on Ridley Scott’s new movie, “The Last Duel.” But he has since been stranded there with his wife Luciana Barroso and their three younger children.

In an exclusive video call with radio show “Fully Charged,” Damon told presenters Graham O’Toole and Nathan O’Reilly that the area is “incredible” and like a “fairytale.”

“This is one of the most beautiful places we have ever been,” he said.

The family has been accompanied by teachers for the children as they had anyway planned to be away for eight weeks before the pandemic struck.

“We have got what nobody else has which is actual live human beings teaching our kids,” he said.

The couple plan to reunite with their daughter “at the end of this month,” though Damon did not expand on where that would be.

Lockdown restrictions in Ireland have required people to stay within two kilometers of their homes, but this has not been a problem for Damon and his family as woods, forest and the ocean all lie within range, he said.

“I can’t think of any place I’d rather want to be in a 2km radius of,” he said. “It feels a little like a fairy tale here.”

The center of Dalkey, Ireland.
Shutterstock

Damon told the show’s hosts that he had heard they had been seeking to interview him, but it was only after speaking on FaceTime to U2 frontman Bono, who lives nearby, that he made contact.

“He said ‘you know there’s a radio station that’s looking for you.’ So that was like the final impetus for me.”

When asked if he would consider buying a property in the area, which is home to numerous Irish celebrities, he said: “I’m coming back anyway. Whenever the world kind of rights itself and we are allowed to go back to work we still have a movie to make. We have got eight weeks of shooting to look forward to, hopefully sooner rather than later.”

'Contagion' vs. coronavirus: The film's connections to a real life pandemic

He added: “Who knows what the world is going to look like. This wouldn’t be a bad place to wind up though.”

Damon revealed that he has recently spoken to Scott Burns, the screenwriter of Contagion – the 2011 movie he starred in about a deadly virus.

“Anybody who says you couldn’t predict this, look at Contagion. Ten years ago we made a movie just by talking to experts and asking how would this look… The whole thing is tragic and sad.”

Towards the end of the interview, the hosts invited French nurse Anaise – one of Damon’s super fans – on to the call.

Taking her by surprise, Damon said: “Thank you so much for what you are doing. This has been so hard for everybody but if there’s any silver lining it’s that hopefully people are finally understanding how awesome you frontline workers are, what you guys do and the debt we owe you guys.”