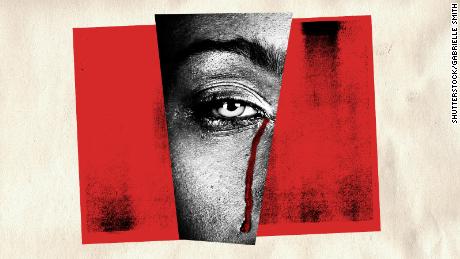 CNN is committed to covering gender inequality wherever it occurs in the world. This report is a collaboration between CNN and The Fuller Project. It is part of As Equals, an ongoing series.

Seconds after Veronica opened her eyes in the hospital, she knew who had put her there. Her body ached; her head throbbed.

The night before, the 25-year-old mother-of-five was busy buying medication for her children in Moroto, a town in northeast Uganda. When Veronica (whose surname we're not using to protect her identity) returned home, her husband picked up a sharp object and stabbed her in the right eye. He then beat her, and when she blacked out, he fled, she said.
Two legal volunteers from the Association of Women Lawyers (FIDA-U), an organization that provides legal aid and access to essential services for women, were already working on the ground in the community. They heard Veronica's screams and decided to investigate. After finding her lying unconscious on the floor, they called their colleague Jacob Lokuda, a front-line legal clerk who responds rapidly to violent incidents, and who recounted what happened.
"She had lost a lot of blood," said 25-year-old Lokuda, "it was very nasty."
The three men carried her to Moroto hospital, roughly four miles away. By car, the journey is a 20-minute drive; by foot, it took over one hour. Veronica drifted in and out of consciousness, mumbling that she thought she was already dead.

"He had gone beyond reason"

Read More
On May 4, Ugandan President Yoweri Museveni began to loosen the country's strict anti-coronavirus restrictions after more than six weeks in lockdown. While businesses including hardware shops and wholesale stores have now reopened, the existing ban on all public and private transport remains intact.
This means, critics say, that many women will continue not only to be trapped at home with a potential perpetrator, but they remain unable to travel to seek medical treatment, refuge or help.
The country currently has 160 confirmed Covid-19 cases and no fatalities, according to Johns Hopkins University.
Many women, like Veronica, have found themselves forced to spend more time with partners who were already abusive. Economic worry is an added tension. More than 80% of Ugandans work in the informal sector and many have lost their jobs due to the Covid-19 restrictions.
"We stopped a lot to catch our breath," says Lokuda, who had already jogged 40 minutes to Veronica's village from his own home. "We didn't have any protective gear, such as gloves, but she needed medical attention," he adds.
"He had gone beyond reason," Veronica said over the phone.
In late March, Museveni indicated that domestic violence is not life threatening and should not be considered so during the Covid-19 pandemic.
"We're just dealing with a few things [that are] life-threatening. Childbirth, snakebite, heart attack -- finish. What else is there? We're not dealing with all problems. Somebody is drunk and has beaten his wife? No, no, no," he said.
He has since addressed the issue and said he is devising a "comprehensive plan" on how best to handle the situation.
While ambulances have been given travel permits, the number of vehicles is low and many citizens live in villages with a patchy phone signal.
Those working in essential services such as health care are allowed on the roads, yet legal aid pro