Pumpkins topped with white stuff? The Texas Panhandle got a jump on winter yesterday with a rare October snowstorm.

Concerns over the US small business lending program were front and center at the first Senate hearing to monitor how that massive $2 trillion coronavirus relief package is being spent. Members of both parties said they want to fix issues with the Paycheck Protection Program. Borrowers have been frustrated with how the rules of the program keep changing, and it’s made some business owners afraid to spend the money. Many Republicans at the hearing also made it clear that they want to wait and see how the effects of this relief package play out before committing to another round of funding like the $3 trillion bill passed late last week by House Democrats.

There are also regulations on what you can wear and how you can act while you’re voting. For instance, some states don’t allow political attire at the polls. Some states also ban photography, or have very specific rules about what kind of photos you can take and how you can share them. And with all this unfolding in a pandemic, proper voting protocol now also may involve masks, acrylic glass barriers and hand sanitizer.

Florida and Georgia are under scrutiny for their reporting on Covid-19 cases. A Florida official working on tracking case numbers says she was removed from the project and questioned the state’s commitment to accessibility and transparency. In Georgia, data tracking cases has been thrown into question after a misleading chart was posted on the state Department of Public Health’s web page. The two states were among the first to announce the reopening of businesses and public spaces amid the health crisis. Now, all 50 states are at least partially reopened, even though as of yesterday, at least 17 of them had recorded a clear upward trend of average new daily cases over the prior week. Meanwhile, the CDC has released a 60-page version of the reopening guidelines it submitted to the White House, which last week shelved the guidance over concerns it was too specific.

The World Health Organization has agreed to hold an inquiry into the global response to the coronavirus pandemic after the European Union and Australia led calls for an investigation. The resolution was agreed upon yesterday during the World Health Assembly meeting and calls for “a stepwise process of impartial, independent and comprehensive evaluation” at “the earliest appropriate moment.” China isn’t mentioned in the resolution, but if an investigation pins blame on Beijing, it could deal a severe blow to China’s global standing. This week’s WHO meeting has been overshadowed by threats from President Trump to permanently cut US funding to the agency over WHO’s early response to the outbreak.

The Trump administration is working to rally support in the Senate for its controversial high-dollar arms sale to the United Arab Emirates orchestrated by Trump’s senior adviser and son-in-law, Jared Kushner. The $23 billion sale of F-35 fighter jets, Reaper drones and munitions to the UAE has frustrated agencies and congressional committees that feel like they’ve been left in the dark about the deal. A bipartisan resolution to block the sale will be voted on later this week. Meanwhile, the House approved the sweeping National Defense Authorization Act with a veto-proof majority. Trump had threatened to veto the bill because it doesn’t contain a repeal of a law that shields social media companies, and would require the military to rename bases that were named after figures from the Confederacy. Among other spending, the $740 billion NDAA would include pay raises for America’s soldiers.

Texans can now vote by mail if they’re worried about the risks of voting in person during the pandemic. The decision was handed down by a federal judge and is part of the ongoing debate over voting rights in the age of Covid-19. Democrats have pushed for more access to mail-in voting, while Republicans, including President Trump, have resisted those calls, citing concerns about potential voter fraud. Meanwhile, James “Trey” Trainor, a Texas Republican, is the newest addition to the Federal Election Commission, which has been dormant since it lost its quorum in August. Democrats and campaign watchdogs opposed Trainor’s nomination, citing his past opposition to full disclosure of political donors and his work to redraw political maps in Texas.

At least seven people have been killed in ongoing violent protests in northern Iraq, where government workers are demanding their salaries be paid as Covid-19 takes its toll on the country’s economy. Hundreds of protesters have demonstrated in several towns, saying they have not received their monthly paychecks since October. More than 1.25 million people are employed by the Kurdistan Regional Government. Iraqi President Barham Salih has called on the regional government to work with the federal government to resolve the pay issue. The pandemic, and the resulting drop in oil prices, have seriously impacted Iraq’s economy. Local governments in Baghdad and other parts of Iraq have also struggled to pay their employees on time.

Hungary has banned transgender and intersex people from legally changing their gender on identity documents, a move that many fear will lead to further intolerance and discrimination against LGBTQ communities in the country. Hungary already has a poor track record when it comes to LGBTQ rights. Earlier this month, the country dropped points in a ranking of European countries put out by the International Lesbian, Gay, Bisexual, Trans and Intersex Association because of “policies targeting LGBTI communities.” Same-sex unions are legally recognized in Hungary, but Prime Minister Viktor Orban and his ruling party oppose the legalization of same-sex marriage.

Thousands have been told to evacuate in parts of Michigan after two dams failed after heavy rain. The governor declared a state of emergency, saying the city of Midland could be under 9 feet of water in a matter of hours. US leaders have expressed concerns about facing natural disasters during the pandemic.

No one’s immune to technical difficulties in this weird work era.

A parasite that feeds off the reproductive organs of millipedes is named after Twitter, where it was found

Belmont Stakes will run as the first leg of the Triple Crown, with no spectators

Guess you could say the stakes are different this year.

A graduation celebration, the end of high school, AND donuts … What’s not to love?

That’s how much capital basketball legend Magic Johnson is providing to fund federal loans for minority and women business owners who have been hit hard by the pandemic. Johnson will provide the loan money through EquiTrust Life Insurance Co., of which he owns a majority.

“Rape is rape no matter who the victim is … if the crime is the same, the law punishing them needs to be the same.”

How to Make a Puppet Using Post-it Notes 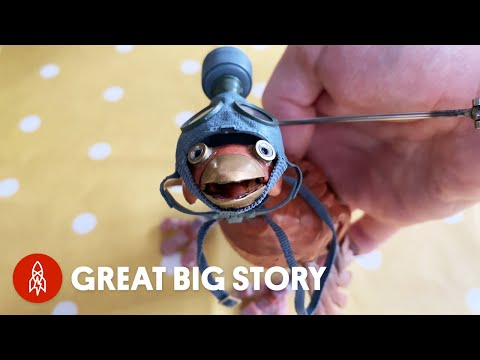 Let your mind wander into the absurd. Just remember to take your newly formed puppet friend with you. (Click here to view.)