With fans barred from stadiums due to coronavirus restrictions, sporting bodies around the world are grappling with how to create atmosphere at matches – and the makers of a new app think they have the answer.

The “Remote Cheerer powered by Sound UD” system is made by Yamaha and broadcasts cheers, boos and chants from users’ homes to the stadium via the internet, according to a press release.

Fans tap buttons on an app to make their feelings known through speakers placed around the stadium, replacing the usual crowd noise. 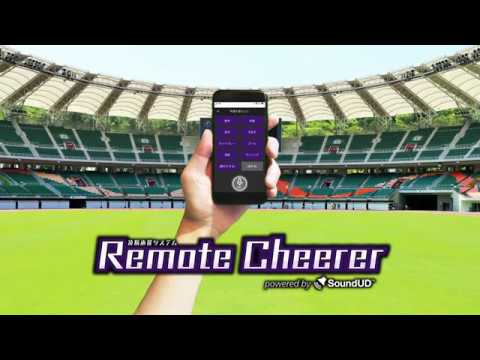 Users can choose which area of the stadium their noise is broadcast from, and there are separate zones for each team to make the atmosphere as realistic as possible.

On May 13, Yamaha tested the system at Japan’s 50,000-seater Shizuoka Stadium ECOPA, one of the largest in the country and home to top soccer clubs Júbilo Iwata and Shimizu S-Pulse.

Yamaha tested the system earlier in May.
Yamaha Corporation

The trial was the first time “Remote Cheerer” had been tested at a venue and Yamaha said it will continue to develop it.

“With the possibility of spectatorless matches and restrictions on cheering in mind, I feel that this system will encourage players on the field by making them feel like their fans and supporters are nearby,” Hiromi Yanagihara, from Júbilo’s business strategy division, said in the press release.

In this May 17, 2020, photo, cheering mannequins are installed at the empty spectators' seats before the start of a soccer match between FC Seoul and Gwangju FC at the Seoul World Cup Stadium in Seoul, South Korea. A South Korean professional soccer club has apologized after being accused of putting sex dolls in empty stands during a match Sunday in Seoul. In a statement, FC Seoul expressed "sincere remorse" over the controversy, but insisted that it used mannequins, not sex dolls, to mimic a home crowd during its 1-0 win over Gwangju FC at the Seoul World Cup stadium. (Ryu Young-suk/Yonhap via AP)
Ryu Young-suk/Yonhap/AP

Sports teams in Japan are preparing to return to action after Prime Minister Shinzo Abe ended the country’s nationwide state of emergency Monday, a week earlier than originally planned.

The Nippon Professional Baseball league will start playing on July 19 and J.League soccer is expected to return a couple of weeks later, according to Reuters.

Other attempts to recreate stadium atmosphere without fans have run into some issues.

South Korean football team FC Seoul was fined 100 million Korean won (around $81,000) after being accused of placing sex dolls in its stands to add to the atmosphere during a closed match.

Some of the figures were holding signs for a company that makes sex dolls, and fans pointed out that they looked like adult dolls rather than mannequins.

FC Seoul apologized to fans and told CNN it would “humbly accept” the fine.