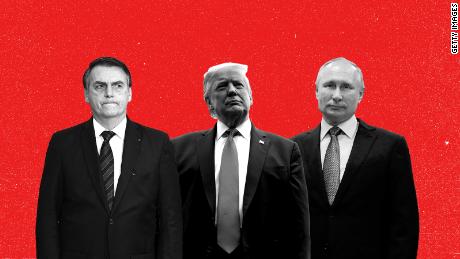 (CNN)The coronavirus pandemic could have been a moment of glory for the world's populist leaders. This is a period of heightened fear and anxiety — emotions that typically allow them to thrive.

Instead, some populists are finding themselves powerless against the outbreaks ravaging their countries. The US, Brazil and Russia now have the highest number of coronavirus cases in the world, and as their death tolls continue to rise, their economies are taking devastating blows.
Much to their frustration, the macho leaders of these countries are finding the virus immune to their playbooks. Intimidation, fear-mongering and propaganda just aren't working. Being guided by science, communicating transparently and long-term planning are proving the sharper tools.
US President Donald Trump has turned to a favorite weapon, Twitter, to try to place blame for his country's situation on China, tout unproven drugs and pressure governors to reopen states. But his blustering tweets and attempts to intimidate haven't stopped the virus.
Russian President Vladimir Putin has pulled his usual PR stunts to project the image of a leader in control, but the country's spiraling infection numbers show the virus has eluded his grasp. Brazilian President Jair Bolsonaro's false message that the virus is "a little flu" that poses no real threat is falling flat, as cases now rise by as many as 20,000 a day. Brazil hasn't even reached its projected peak.
Read More
Trump, Bolsonaro and Putin all initially downplayed the risk of the coronavirus, experts say, even as they watched it overwhelm nations like Italy. Now, they are scrambling to appear in control, as the virus keeps transmitting and killing, exposing their weaknesses.

The denial of the coronavirus as a threat by the presidents in the US and Brazil inevitably led to foot-dragging in their governments. The consequences are serious — models are now emerging that show how swift action can save lives. A Columbia University model, for example, shows that if the US had imposed social distancing one week before authorities called for it, 36,000 lives could have been saved. The US' death toll is now more than 100,000.
Like Bolsonaro, Trump continually dismissed the virus as similar to the flu, and repeatedly assured Americans that things were "under control" in the early months of the year. When it became clear they weren't, Trump still signaled that everything would be OK.
"This was unexpected. ... And it hit the world. And we're prepared, and we're doing a great job with it. And it will go away. Just stay calm. It will go away," he said on March 10, as the number of US cases approached 1,000.
US President Donald Trump, left, listens as infectious diseases expert Dr. Anthony Fauci speaks at a coronavirus briefing at the White House on March 21.
While the US imposed some travel restrictions early, beginning with banning flights to and from China from February 2