‘Jaws,’ the ultimate summer movie, meets the age of coronavirus

Remember the mayor in “Jaws,” coaxing that family to go in the water, before they grab their raft and tentatively wade into the ocean? That image – introduced 45 years ago this month – keeps coming to mind as entertainment options, including movie theaters, gradually reopen in the age of coronavirus.

Covid-19, of course, is a different kind of unseen threat, triggering a shutdown of most public venues. Many of those businesses are returning, despite the fact that an understanding of the virus and its transmission continues to develop and evolve.

Perhaps that’s why, for many, the water doesn’t look especially inviting yet. You can enjoy casino gambling, cruise ships, football stadiums, movie theaters and theme parks – without necessarily wanting to heed the call of the business-minded mayor in “Jaws,” Amity’s Larry Vaughn, and be the first dive in.

“Jaws” provides an appropriate metaphor in more ways than one, to the extent that empty theaters are a potent symbol of coronavirus’ effects.

Mayor of Amity Island, Larry Vaughn displaying good judgement. "Why Aren't You In The Water?" 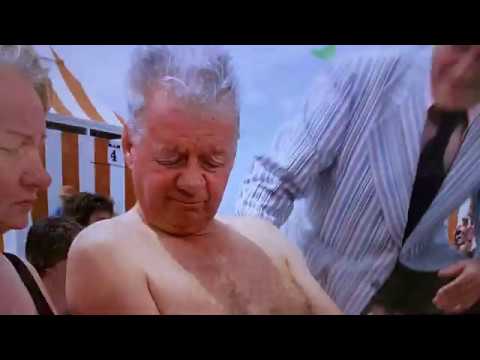 The Steven Spielberg movie’s success in 1975 is largely seen as the beginning of the summer blockbuster, followed two years later by “Star Wars.” That changed the way movies were distributed and marketed, with big, sweeping rollouts supported by lavish TV ad campaigns. (A Frontline documentary about “Jaws” and its impact on movie-going was titled “The Monster That Ate Hollywood.”)

Even with theaters scheduled to reopen in July, this will surely be the quietest summer became synonymously with movie-going.

It’s possible the summer isn’t entirely lost. Warner Bros. (like CNN, part of WarnerMedia) is still hoping to release “Tenet” – the latest mind-bending concept from “The Dark Knight” director Christopher Nolan – in July, followed by Disney’s live-action “Mulan.” Still, most of the year’s big movies were postponed when the lockdown began.

Social distancing will reduce the number of patrons per theater, and nobody knows how consumers will balance their enthusiasm to see these films against health concerns.

Some of that will depend on how different people assess risk. Based on early indications, some have clearly determined that the odds of contracting coronavirus – and having a bad outcome from it – aren’t that bad.

Crowds run out of the water in a scene from the film 'Jaws', 1975. (Photo by Universal/Getty Images)
Universal Pictures/Moviepix/Getty Images

Nevertheless, the odds of experiencing a shark attack are awfully low, which didn’t keep a generation that saw “Jaws” in theaters from eyeing the ocean warily. Such fears aren’t always rational, and speaking personally as a kid who had an active imagination, just jumping in a pool that summer felt like an act of courage.

If you’re currently apprehensive about venturing out to a confined space with strangers for hours, to paraphrase the tagline from another Steven Spielberg movie, you are not alone.

According to a CNN poll, people are “about evenly split” in their comfort level toward returning to old routines, with a starker division along political lines.

The desire to return to some semblance of normalcy ultimately hinges on various factors, many of which are beyond our control. They include the hope that fellow citizens will help mitigate the risks by following public-health guidelines.

In “Jaws,” seeing that one family go swimming quickly prompted others to join them, a sly commentary on human nature. The major difference with a pandemic is that even if you don’t choose to go splash around, there’s still reason to worry about being in close contact with those that do.

Granted, the degree of danger associated with coronavirus isn’t evenly distributed. But when it comes to the nagging uncertainties associated with an enemy we can’t see – a Great White Shark under the waves, or a tiny virus in the air – in the broadest sense, everyone is in the same boat.