Gabrielle Union helped kick off some conversations about race in Hollywood and now she’s got even more to say.

The actress appeared this week on “The Daily Show with Trevor Noah” and talked about what’s currently happening with race relations in the United States, as well as the investigation that followed her exit from NBC’s “America’s Got Talent.”

“Silly me, I thought ‘independent’ was like independent,” said Union, who said she has participated in the investigation. “But when NBC and [production companies] Fremantle and Syco pay for that investigation, they control it.” 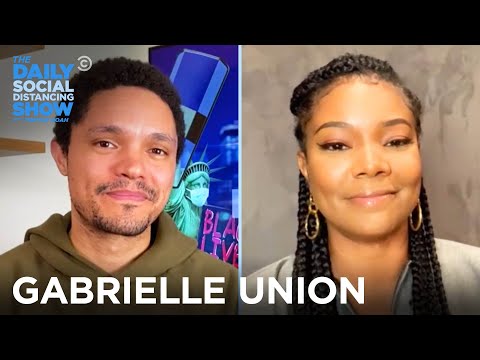 Fremantle and Syco are two British based companies that are behind some of the most successful talent competitions on TV, including “The X Factor” and the “Got Talent” franchise of which “AGT” is a part.

Syco was founded by Simon Cowell who is one of the judges on “AGT,” as well as an executive producer.

Neither company has confirmed that they paid for the investigation.

Union did not return to the competitive reality show this season.

Her exit last November came amid reports alleging her contract was not picked up after urging the show’s producers to report an incident involving a racist joke and her clashing with Cowell over his smoking on set, which is prohibited in California where the show is filmed.

She told Noah she believed her “AGT” judging gig would be easy, quipping “How hard is it to watch jugglers,” but alleged that from day one Cowell was smoking on set.

“When your boss, the person who has the ability to determine who gets opportunities and who doesn’t, doesn’t believe that the law applies to him or the rules apply to him, and he does it in full view of NBC, Fremantle and Syco and no one cares about Simon Cowell exposing all of these employees to second hand smoke, that’s day one,” Union alleged. “What message do you think that sends to anyone that has an issue with the very real racism and the lack of accountability?”

CNN has reached out to reps for “America’s Got Talent” and Cowell for comment.

A rep for Cowell told Variety in May that “when he was directly informed of the smoking complaint during the first couple of days of the season, he immediately changed his behavior and the issue was never raised again.”

When Union’s allegations first came to light, NBC said it took diversity very seriously and would “put new practices in place if necessary,” pending the outcome of the investigation.

Fremantle, Syco and NBC issued a joint statement in response to Variety’s story that read in part: “While the investigation has demonstrated an overall culture of diversity, it has also highlighted some areas in which reporting processes could be improved.”

Earlier this month, Union filed a discrimination complaint against NBC and “AGT” producers with the California Department of Fair Employment and Housing (DFEH).

“When Gabrielle Union informed NBC of racially offensive conduct during the taping of America’s Got Talent, NBC did not ‘stand’ with her in ‘outrage at acts of racism,’” Union’s attorney, Bryan Freedman, said in a statement to CNN at the time. “Instead, NBC did not care enough to either promptly investigate Ms. Union’s complaints or even ask HR to get involved. Rather, NBC stood against her and directed its ‘outrage’ at Ms. Union for whistleblowing about the racially offensive conduct she experienced while working for NBC on America’s Got Talent.”

In responding to CNN regarding Union’s comments during Noah’s show, a rep for NBC directed CNN to its statement released after Union filed her complaint on June 4.

“The allegation that anyone involved in this process threatened Ms. Union is categorically untrue,” the statement read. “We took Ms. Union’s concerns seriously, and engaged an outside investigator who found an overarching culture of diversity on the show. NBCUniversal remains committed to creating an inclusive and supportive working environment where people of all backgrounds are treated with respect.”

Union alleged to Noah during her appearance on his show that some of those interviewed for the investigation turned over “what they believe to be inflammatory things, or things that are not advantageous to me.”

Noah pointed out that there is a lot of conversation in America at the moment as people protest the death of George Floyd while in the custody of Minnesota police.

“Honestly it’s just one big anxiety attack,” Union said. “Between the global pandemic that the world is experiencing and waking up every day to the brutalization, the murder of black bodies….[it’s daily]…the nonstop onslaught of trauma…I don’t even know if anxiety is a big enough word.”