Athlete Refugee Team: He runs 170km a week for the millions who, like him, left home in search of a better life

It was while playing football in Tel Aviv that Jamal Mohammed, a refugee who fled Sudan for Israel, decided to take up running.

“I had never done running in my entire life,” Mohammed tells CNN Sport. “I just came to Israel and one of my best friends told me: ‘You can run after the ball for three or four hours – I think you better start running with this Alley Running team.’”

This was in 2014, but Mohammed’s endurance had already been tested four years earlier when he left the Sudanese province of Darfur and embarked on a journey that would require an arduous, three-day crossing of Egypt’s Sinai Desert by foot.

Violence and conflict had been the backdrop of Mohammed’s early life. His father was one of 97 civilians killed by the Janjaweed as the government-backed militia tore through his village in Darfur in 2003.

It is estimated that more than 15,000 Sudanese villagers were killed by the Janjaweed between early 2003 and late 2004 under Omar al-Bashir’s presidency and millions of others were displaced.

“At that age, eight or nine, I started to work to represent my siblings,” says Mohammed.

“My Dad was gone, I’m the oldest one at home, and I decided to help my siblings. Then I started working … I feel myself like I’m the father of this family so I had to go and do something.”

Years later, despite the protestations of his mother, Mohammed chose to leave Sudan.

Arriving in Israel via Egypt with no understanding of Hebrew or English, he got by on limited Arabic. After moving between several refugee holding camps, he was eventually offered somewhere to live in Tel Aviv by a fellow Sudanese immigrant.

Those early days in Israel were filled by hours playing football with friends before Mohammed found the Alley Runners, an athletics club designed to support the city’s disadvantaged communities. “I joined them and then I fell in love with this thing,” he says.

After competing at the World Athletics Championships, Mohammed is now targetting the Olympics.
Richard Bullock

This year would have seen Mohammed attempt to run in the 5,000 or 10,000 meters at the Olympics only for the Games to be postponed amid the coronavirus outbreak, placing his ultimate ambition on hold for a year.

“It’s happened, just take it easy, keep training and we’ll be back – that’s what I said to myself,” says Mohammed of the postponement.

“It’s my biggest dream to be there to compete at the Olympics with all the best athletes, all the famous athletes. It is a big, big dream. Hopefully it can come true.”

The Athlete Refugee Team was formed in 2015 and made its debut at the 2016 Rio Olympics as 10 athletes originally from Syria, South Sudan, Ethiopia and the Democratic Republic of Congo represented the near-70 million refugees around the world. 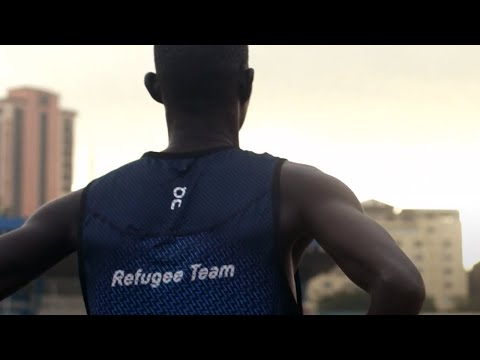 Directed by Richard Bullock and backed by Swiss running brand On, RUN features Tegla Loroupe, the former distance runner who was in charge of the team at the Olympics and continues to mentor a number of refugee athletes at training camps in Kenya.

While her finest athletes won’t get the opportunity to race in Tokyo this year, Loroupe nonetheless notes their development.

“We used to force them to run but today, no – they know when their coach tells them [that] ‘tomorrow we are going for this many kilometers,’ they are up very early in the morning,” she tells CNN Sport.

“For the girls, they train with (Hellen) Obiri, our gold medalist over 10,000 and 5,000 meters. And three months ago, we went for another training camp in Iten where our athletes were training with the Kenyans. They were ready for Tokyo.

“What is important for me is to see how these athletes have transformed since Rio,” added Loroupe. “Today they balance education and their training which is very important for us sports people. Their discipline is very high.”

Tegla Loroupe was Chef de Mission of the refugee team during the 2016 Olympics.
Boris Streubel/Getty Images Europe/Getty Images for Laureus

Loroupe, who was named 2016 UN Person of the Year after the Rio Olympics, is seen as a mother figure to the athletes.

A distinguished distance runner in her heyday, she became the first African woman to win the New York City Marathon in 1994 and held the world record from 1998 to 2001, in between which she bettered her own record time at the 1999 Berlin Marathon.

Throughout her career, Loroupe was motivated to provide a voice for athletes from troubled areas. She set up the Tegla Loroupe Peace Foundation in 2003, a charity that uses sport as a means of promoting peace in warring communities.

“For me as an athlete, I was always feeling so bad when you train with kids and they don’t go anywhere,” says Loroupe.

“Sometimes people say, ‘These kids, they’re from criminal parts of the world.’

Loroupe trains member of the Athlete Refugee Team at a training camp in Kenya.
Richard Bullock

“Human beings can be cruel. My background is also from a community where they have cattle rustling and I also had (that) stigma where they used to say, ‘Tegla Loroupe, she’s also from this very bad community (so) leave her alone.’

“I realized that the kids themselves are not bad people, it’s circumstances that make people run away from their homes.”

Mohammed shares a similar story to the athletes Loroupe mentors in Kenya, a number of whom fled Sudan and South Sudan and also compete for the Athlete Refugee Team.

It’s been nine years since he’s seen his family back home in Sudan, but he’s regularly in contact with them through phone calls and social media – although when it comes to his running career, his mom is still none the wiser.

“She doesn’t know anything about this,” says Mohammed.

Members of the Athlete Refugee Team are filmed during a training run in Kenya.
Richard Bullock

“In Darfur, we don’t have those kinds of sports, no running. We just play football – we can make a ball from socks, we put a t-shirt and socks together and make a ball and play, that’s it.

Mohammed says he’s now found a second family through the Alley Running Club and its athletes, coaches and volunteers. He juggles work as a cleaner with training, often running 170km a week in the build-up to big races.

The Olympics next year remains the goal, where Mohammed hopes to run for the millions who, like him, left home in search of a better life.