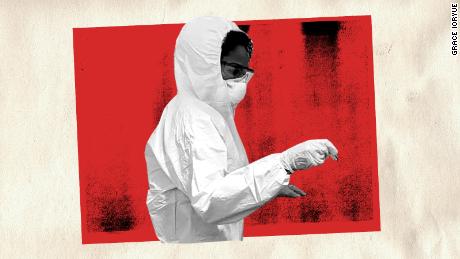 She's on the frontline of a rape epidemic. The pandemic has made her work more dangerous

Lagos, Nigeria -- At the start of each day, Dr. Anita Kemi DaSilva-Ibru and her team put on gloves, facemasks and other personal protective equipment to see their patients.
They're not treating people for Covid-19, but they are on the frontline of the pandemic, working at the Women at Risk International Foundation (WARIF), a rape crisis center in Lagos, Nigeria.
Wearing protective gear is the new reality for crisis center workers, like DaSilva-Ibru.
"We change these kits each time we see a survivor as we are mindful of the risk of transmission of the virus between the survivor and us and the cross-contamination between a survivor and the next," she told CNN.
US-trained gynecologist DaSilva-Ibru has spent most of her career treating hundreds of sexual violence victims but it was the growing scale of the crisis in Nigeria that prompted her to set up WARIF in 2016.
Read More
The clinic in Yaba, a suburb of Lagos, provides medical treatment, legal assistance therapy and space for rape victims and survivors of sexual abuse to get back on their feet.
One in four Nigerian girls has been the victim of sexual violence, according to UN estimates but DaSilva-Ibru says the numbers are higher as many cases go unreported due to the stigma attached.
In recent weeks, two high profile cases of gender-based violence have brought Nigerian women out onto the streets demanding change.
Uwaila Vera Omozuwa, a 22-year-old microbiology student, was found half-naked in a pool of blood in a local church where she had gone to study after the Covid-19 lockdown left universities across the country shut.

"Rape is an epidemic in this country."

Her family said her attackers raped her and the student died while being treated at the hospital. A few days later, another student, Barakat Bello, was allegedly raped and killed during a robbery at her home, according to human rights group Amnesty International.
"Rape is an epidemic in this country," DaSilva-Ibru told CNN.
She says her work with survivors of sexual violence has become more critical during the outbreak, with restrictions to curb the virus from spreading fueling a surge in calls.
It's a story echoed in other parts of the region, as authorities grapple with a growing number of Covid-19 cases and the impact restrictions are having on women.
Related: A transport ban in Uganda means women are trapped at home with their abusers
DaSilva-Ibru said she initially closed the center after authorities locked down the city in March, she had to reconsider the decision as the organization became inundated with SOS messages from sexual violence victims and their guardians.
Staff operating the 24-hour helpline at the center also reported a 64% increase in calls during this period, according to DaSilva-Ibru.
"Our phones were ringing. Women were calling and desperately asking how we can help them, these were women in fear of their lives, as many have now been forced into quarantine with their abusers, in an already volatile environment," DaSilva-Ibru told CNN.
For the center to re-open, DaSilva-Ibru said she had to source PPE, face masks and other protective gear personally and when that was not enough, the center launched an online appeal for funds from donors to buy the equipment at no cost to survivors, she said.
"We carry out forensic examinations on survivors and our frontline health workers who triage and examine patients are in close proximity to the survivors. As much as we need to carry out our duties, we also need to ensure our workers are adequately protected," DaSilva-Ibru told CNN.
The challenges Ibru faces to keep the center open, doesn't compare to what sexual violence victims have experienced as a result of this pandemic, she said.
DaSilva-Ibru recalls a woman who told staff at the center that her male friend had raped her in her home during the lockdown.