The US economy added a whopper 517,000 jobs in January
Adani market rout deepens as uproar brings Indian parliament to a halt
Is the Fed ignoring long Covid in its inflation fight?
Something isn't loading properly. Please check back later.

NASA is offering $35,000 in prizes to design a toilet that will work on the moon

NASA wants you to help put the loo in lunar, so it’s offering $35,000 in prizes to design a toilet that can be used on the moon.

The space agency has set an ambitious goal of sending astronauts back to the moon by 2024 and the crew will obviously have to go to the bathroom during the mission.

Kathy Lueders, manager of NASA's Commercial Crew Program, center, is seen with Norm Knight, deputy director of Flight Operations at NASA's Johnson Space Center, left, and Stephen Koerner, Director of the Flight Operations Directorate at NASA's Johnson Space Center, right, following launch of a SpaceX Falcon 9 rocket carrying the company's Crew Dragon spacecraft on the Demo-2 mission with NASA astronauts Douglas Hurley and Robert Behnken onboard, Saturday, May 30, 2020, in firing room four of the Launch Control Center at NASA's Kennedy Space Center in Florida. NASA's SpaceX Demo-2 mission is the first launch with astronauts of the SpaceX Crew Dragon spacecraft and Falcon 9 rocket to the International Space Station as part of the agency's Commercial Crew Program. The test flight serves as an end-to-end demonstration of SpaceX's crew transportation system. Behnken and Hurley launched at 3:22 p.m. EDT on Saturday, May 30, from Launch Complex 39A at the Kennedy Space Center. A new era of human spaceflight is set to begin as American astronauts once again launch on an American rocket from American soil to low-Earth orbit for the first time since the conclusion of the Space Shuttle Program in 2011. Photo Credit: (NASA/Joel Kowsky)
Joel Kowsky/NASA

NASA may adapt the toilet design for its Artemis lunar lander, so it will need to work both in the microgravity of space, or “zero-g,” and on the moon, where the gravity is about a sixth of what we feel on Earth, according to the design guidelines posted by NASA and HeroX, which allows anyone to create challenges to solve a problem facing the world.

The mission will include the first female astronaut to ever travel to the moon, so the toilets will need to be able to accommodate men and women.

The toilet designs should also conserve water and “help maintain a pristine environment inside the lander that is free of odors and other contaminants.”

“Bonus points will be awarded to designs that can capture vomit without requiring the crew member to put his/her head in the toilet,” the guidelines said.

It should be able to support a crew of two astronauts for 14 days and allow for the transfer of the collected waste to storage or for disposal outside the vehicle.

The toilet should be easy to clean and maintain and should have a turnaround time of five minutes or less between uses. It also needs to use less than 70 watts of power and make less noise than an average bathroom fan.

Space will also be an issue, so the toilet needs to weigh less than 33 pounds on Earth and be less than .12 cubic meters in volume.

A toilet on board the International Space Station is about the size of a small closet. 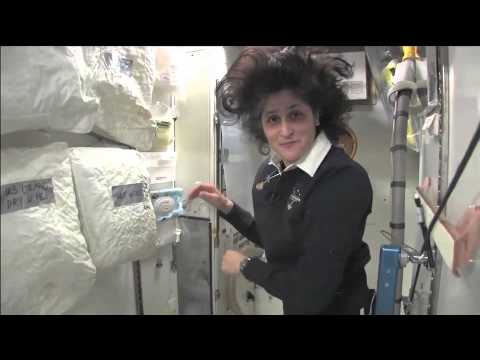 The top prize is $20,000 and the second and third place winners will get $10,000 and $5,000. The deadline for submitting the designs is August 17 and the winners will be announced in October.