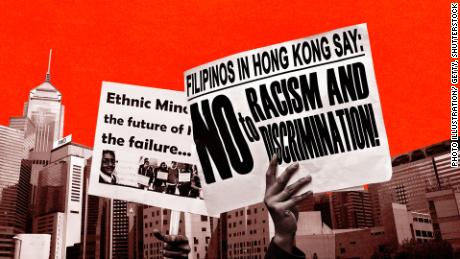 Hong Kong (CNN)Zaran Vachha was born and raised in Hong Kong. Yet the 34-year-old, of Indian, Iranian, Malay and Sri Lankan descent, says the Chinese city has never treated him like one of its own.

He says he has been spat at, cussed at, and denied public services. When he sits down on the subway, nearby passengers often get up or move away.
Once, he saw an intoxicated woman unconscious in the middle of the road. He carried her to safety, and ran into a convenience store to buy her water. When he came back out, he says police who thought he'd drugged her shoved him against a wall and slapped handcuffs on him, before witnesses came to his defense.
The problem, he says, is the color of his skin.
"I've always considered Hong Kong my home, but I've always felt like an outsider," said Vachha. "Being a person of color in Hong Kong, you get looked down on, no matter what. ... The darker you are, the worse you're treated."
Read More
Non-profit organizations and community groups, particularly those representing darker-skinned South and Southeast Asians, have long complained about discrimination in education, employment, and housing -- allegations supported by a number of studies over the years, including some conducted by government bodies.

Hong Kong enacted an anti-racism law in 2008, after pressure from international organizations, including the United Nations. But activists say it's a flawed, toothless piece of legislation that fails to hold authorities accountable.
"These are the ways in which we see quite clearly that there's racial discrimination, and it's everywhere," said Puja Kapai, a professor of law who researches minority rights at the University of Hong Kong. "We're supposed to be Asia's World City, we're supposed to have this multicultural system, but we have a great problem."

Hong Kong has a global reputation for being an international hub -- but, in reality, it's a particularly racially homogenous city, with ethnic Chinese making up about 96% of the population, not including foreign domestic workers. That's a far cry from other major cities like New York, where Whites are the largest group, but make up less than half of the total population.
Hong Kong's immigration laws make it harder for certain groups to naturalize and build second- and third-generation minority communities. For instance, foreign domestic workers are not allowed to gain residency; in one highly publicized case in 2013, a Filipina domestic worker was denied permanent residency despite having worked in the city for 27 years.
Maggi Leung, an associate professor at Utrecht University who used to lecture and research in Hong Kong, criticized the city's immigration and citizenship policies as "discriminative." The system "gives special privileges to the 'desired' individuals while restricting the rights of others who are framed as unskilled, disposable and a burden," she wrote in <a href="https://journals.tplondon.com/ml/article/download/263/256/266" target