Hurricane Laura was a formidable storm when it made landfall in Louisiana on Thursday.

Laura broke multiple records, including the highest water level ever recorded at the Mermentau River gauge at Grand Chenier location. The gauge topped out at 17.14 feet, more than 4 feet above the previous high of 13 feet from Hurricane Audrey in June 1957, according to the US Army Corps of Engineers.

Another notable record was that Laura was the seventh named storm to make landfall in the US so far in 2020, the most to do so before the end of August (four tropical storms and three hurricanes). This begs the question, why are so many more named storms impacting the US?

The planet has warmed significantly over the past several decades, causing changes in the environment in which extreme weather events are occurring.

A study of 40 years of satellite data of global storms by researchers at the University of Wisconsin and the National Oceanic and Atmospheric Administration (NOAA) found that the probability of storms reaching major hurricane status – Category 3 or above with sustained winds of 110 mph or higher – has increased decade after decade.

The study found that hurricanes, typhoons, and tropical cyclones worldwide are becoming stronger and potentially more deadly as the globe warms due to the climate crisis.

“The change is about 8% per decade,” Jim Kossin, author of the study, told CNN in May when the study was released. “In other words, during its lifetime, a hurricane is 8% more likely to be a major hurricane in this decade compared to the last decade.”

What makes a hurricane powerful?

One way a hurricane strengthens is by traveling over warm water. Ocean surface water temperature needs to be at least 80 degrees – more than 86 degrees Fahrenheit is ideal – with that heat extending beneath the surface. High-altitude winds need to be calm, so they don’t disrupt thunderstorm activity.

When Laura moved through the Gulf of Mexico, sea surface temperatures were in the upper 80s.

A storm’s internal conditions also must be exactly right. A hurricane needs a way to ventilate, much like a car engine, so it can continue to process all of the fuel from the warm water and use it to strengthen the storm.

According to the National Hurricane Center, rapid intensification is when a tropical system sees a sustained wind increase of at least 35 mph in 24 hours or less. Laura’s wind speed increased 45 mph in 24 hours, going from 65 mph to 110 mph between 5 a.m. Tuesday and 5 a.m. Wednesday.

Not all climate change is equal

It is important to note that no one single storm can be attributed to climate change. Laura alone was not created solely by climate change. In fact, you could make a bigger argument that the absence of El Nino, (or even the forecast presence of La Nina) was more of a cause. But strong, rapidly intensifying storms like Laura are more likely to occur in general thanks to climate change.

Due to climate change, ocean temperatures are well above normal. The warmer the ocean is when a tropical system moves into it, the more likely it is to intensify.

According to NASA, ocean temperatures also influence the development of tropical storms and hurricane, which take energy from warm ocean waters to form and intensify. 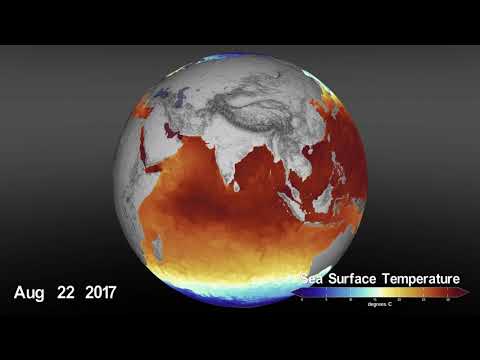 We saw this with Hurricane Marco as it moved into the Gulf of Mexico. In theory, the ocean temperatures were very warm – fuel for hurricanes to develop further – but even with that added ingredient, Marco could not overcome the strong wind shear, and associated dry air, and eventually weakened and fell apart shortly after landfall.

But there can be destructive consequences.

Excessive rain and rapid strengthening are the biggest concerns

One of the effects of climate change that scientists are most certain of is increased rainfall amounts and rainfall intensity – a result of warmer than normal ocean temperatures that create a warmer and more moist environment for the storm.

Kevin Trenberth, a senior scientist at the National Center for Atmospheric Research, previously told CNN that climate change leads to these warmer and wetter environments and sets the stage for what can be the storms’ biggest threat: heavy rainfall and flash flooding.

We saw it with Hurricanes Florence, Harvey, Michael, Dorian, and again with Laura.

“It’s one of the simplest relationships in all of meteorology,” said Michael Mann, an atmospheric science professor and director of the Earth System Science Center at Pennsylvania State University.

For every 1 degree Celsius (1.8 degree Fahrenheit), there is 7% more moisture in the air. With Hurricane Florence in 2018, ocean temperatures were trending around 2.7 degrees Fahrenheit warmer than normal, which contributed to nearly 10% more moisture available in the atmosphere.

Florence ended up becoming the wettest tropical system to strike the US East Coast, dumping almost 3 feet of rain on parts of North Carolina.

The National Oceanic and Atmospheric Administration has said the 2020 Atlantic hurricane season will likely be extremely active, perhaps even historic, with even more records likely to fall. NOAA predicts 19 to 25 named storms this season and the agency has never forecast up to 25 storms in a season,

And the season hasn’t even hit its peak, which statistically occurs on September 10.