Instagram's founders are back with a new app
Hong Kong is criminalizing CBD as a 'dangerous drug' alongside heroin
Snap stock plunges 15% as revenue growth stalls
Something isn't loading properly. Please check back later.

Intel has a new logo and jingle

Intel has a new logo, marking just the brand’s third identity refresh in the past 51 years.

Gone is the well-known circular logo. In its place is a simpler typeface with brighter colors aimed at representing the company that has progressed beyond computer chips. It’s Intel’s fourth logo. The former logo debuted in 2006.

In an announcement Wednesday, Intel’s Chief Marketing Officer Karen Walker said its brand identity has remained “largely untouched” amid several years of evolution for the company from processors to software that powers artificial intelligence to the internet-of-things.

This new brand is not only representative of the technology we create, but also an embodiment of the human spark of ingenuity and innovation that runs through the company,” Walker said in a statement.

The new logo isn’t drastically different from the previous logo (the lowercase letters remain as well as the square-capped “i”). That’s on purpose, Walker said, explaining the redesigned logo is more modern and brings “dimension and breadth” to the brand. Blue remains the brand’s most prominent color, with Intel adding “new variants with an extended color palette to add more depth and modernize our visual identity.”

Beyond the logo, the “Intel Inside” stickers emblazoned on computers have been redesigned. And it has modernized its “bong” jingle heard on its commercials.

The new logo is out today, with the other elements of the refresh rolling throughout the year.

Intel (INTC) has had three logos prior to this, with the original launch logo in 1969, the “Intel (INTC) Inside” logo in 1991 and its most recent logo. 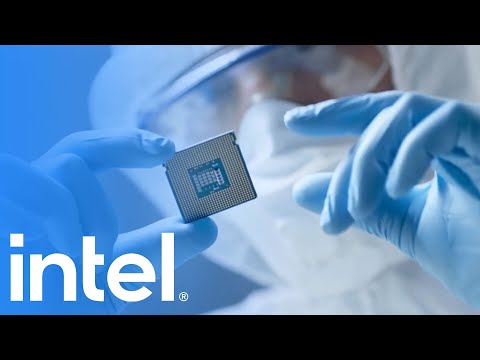 New brand for a new era

The refresh coincides with Intel’s unveiling of its 11th generation Core PC processors. The company also announced a new chip brand called Evo, which will integrate Intel’s graphics processor and be featured in the highest-end laptops.

Intel faces increasingly stiff competition from AMD (AMD) and ARM, lighting a fire under the once-complacent chipmaker that was essentially a monopoly not too long ago. But a growing number of PCs feature AMD (AMD) chips, which have proven capable of competing on both raw power and speed at affordable prices.

And Apple (AAPL) recently announced it will phase out its Intel chips in Macs in favor of its own ARM-based chips. ARM, the architecture used in smartphones and tablets, sips power but is increasingly powerful and capable of handling serious computing tasks.

So Intel’s new brand comes at a moment of truth for Intel. If it can keep the competition at bay, it might be remembered as the logo when Intel overcame the biggest period of adversity in its history.