A rat in Cambodia has been heralded a hero and awarded for saving lives.

Magawa, an African giant pouched rat, was given a gold medal by the British veterinary charity People’s Dispensary for Sick Animals (PDSA) for his work detecting undetonated landmines in Cambodia.

Decades of conflict have left the Southeast Asian country littered with millions of landmines, unexploded ordnance (UXO), and other explosive remnants of war that still kill or injure dozens of people each year.

Cambodia, with assistance from other countries, has spent years slowly clearing the land of explosives, but it’s difficult and dangerous work.

This is where Magawa comes in.

The organization, which was founded in Belgium and is headquartered in Tanzania, trains rats like Magawa to detect the scent of the explosive chemicals used in landmines and point them out to their handlers.

Magawa is larger than your average pet rat – but still light enough he would never set off a landmine by walking over it, the way human de-miners might.

In seven years, he has discovered 39 landmines and 28 items of unexploded ordnance, helping clear more than 141,000 square meters (nearly 35 acres) of land, according to PDSA -- making him the charity’s best performing rat.

“Magawa is a hero rat. We’re thrilled to celebrate his life-saving devotion by awarding him the PDSA gold medal,” PDSA’s Director General Jan McLouglin said in a virtual presentation of the medal, which was specially designed to fit on Magawa’s work harness.

The PDSA Gold Medal, part of the organization’s Animal Awards program, is “the highest honor for outstanding animal bravery and exceptional dedication in civilian life,” according to its website.

African giant pouched rats are intelligent and easy to train, according to the press release; Magawa began training from a young age, and “passed all his tests with flying colors” before being deployed to Cambodia.

He has been trained to ignore scrap metal lying about, and signals to his handler when he detects a landmine’s exact location. He’s so fast at finding landmines that he can clear an area the size of a tennis court in 30 minutes – something that might take a human four days using a metal detector, said PDSA. 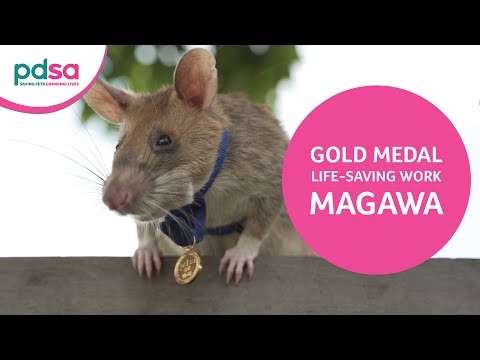 “On a daily basis, HeroRAT Magawa’s work is life-saving and life-changing and has a direct impact on the men, women and children in the communities in which he works,” said the press release. “For every landmine or unexploded remnant he finds, he eradicates the risk of death or serious injury in locations already suffering significant hardship.”

Cambodia has the highest number of amputees per capita in the world, with 25,000 unexploded ordnance-related amputees. Since the fall of the Khmer Rouge’s brutal regime in 1979, Cambodia has recorded 64,840 casualties caused by mines or other explosives, according to the Cambodian Mine Action and Victim Assistance Authority.

Multiple countries dropped unexploded ordnance across Cambodia, Vietnam, and Laos during the Vietnam War. The US alone dropped 2.7 million tons of ordnance – including cluster bombs and submunitions – over a four-year carpet-bombing campaign in Cambodia. Up to a quarter of the cluster bombs failed to explode, meaning they stayed active and dangerous but out of sight, according to a 2019 report by the US Congressional Research Service.

Then, after the fall of the Khmer Rouge, the ensuing civil war and Vietnamese invasion saw more landmines laid across the country.

The PDSA estimates that there are still three million unexploded landmines in Cambodia. Some reports estimate that only half the country’s land has been cleared so far, according to the congressional report.