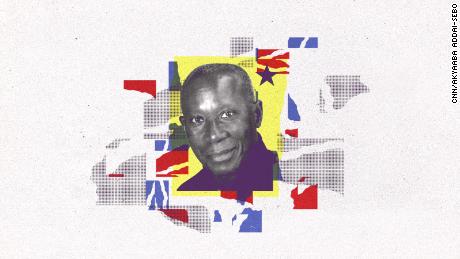 Black children must be able to believe in themselves. That's what Black History Month is for

After visiting the US in the 1970s, Akyaaba Addai-Sebo in 1987 initiated Black History Month in the UK, which is celebrated in October. He moved to the UK to seek refuge from political persecution in Ghana in 1984, working to promote diversity in a variety of roles for organizations including the Greater London Council, African Refugees Housing Action Group, Notting Hill Carnival, and Organization of African Unity. In 2014, he was executive producer of "One Humanity," a documentary on the 1988 and 1990 Wembley concerts for Nelson Mandela.

(CNN)Black History Month (BHM) is a celebration of our diversity -- all the colors of the rainbow that sparkle out of the black hole of creation. We share common roots in the dark, tropical wombs of our mothers and our strength lies in the variety within our oneness.

BHM pays eternal tribute to this fact of our origins during the splendor of the days following the Fall Equinox, a glorious spectacle of seasonal balance, a harmony we also need in our relations with one another.
October is a period of recognition, reconciliation, renewal and a review of the state of Black Britain.
BHM was created for the younger generation to own and fill with rich and enabling content. It was inspired by six-year old Marcus, whose mother named him after legendary Black nationalist leader Marcus Garvey. She and I worked at the Greater London Council (the capital's main governing body, now replaced by the Greater London Authority), and she came in distraught one day because her son had asked her why he could not be White. She felt that British society and the school system had failed Marcus by making him question his identity at that early age.
Something had to be done to make the Black Child believe in themselves. After weeks of reflection, what stirred in me was the urgency of creating a permanent celebration in the UK of Africa's contribution to world civilization from antiquity to the present, and especially its contribution to the development of London, and the United Kingdom as situated in Europe.
Read More
'Price of blood': Financial London's grim history revealed in new tour
I had lectured about African traditions in the United States, and children and their parents told me it had given them a new sense of self. Despite all its grand institutions of higher education, the UK was still a touchstone for colonialism, imperialism and racism.
I devised a plan with the help of the pioneering team at the GLC's Ethnic Minorities Unit (EMU), ably led by Ansel Wong. We launched the GLC Historical Lectures and Concerts, which took place in February through May 1986 to affirm Africa's contribution to civilization. For a week, we filled the Royal Albert Hall with schoolkids to listen to inspirational music and talks. Speakers toured the communities and generated a buzz.
We helped draw attention to heightened campaigns against systemic racism in the UK and apartheid in South Africa at that time. This work radiated from the EMU to all corners of the UK and across Europe to Africa and the US. Rev. Jesse Jackson, Angela Davis, Winnie Mandela, Marcus Garvey Jr., Sally Mugabe, Graca Machel, John Henrik Clarke, Yosef Ben-Jochannan, Burning Spear, Ray Charles, Max Roach, Hugh Masekela and many more came to London between 1985 and 1988 at the invitation of the GLC to support the anti-racist and anti-apartheid campaigns.
The lectures were compiled into a book and published under the title "Our Story," which I edited with Ansel Wong.
Akyaaba Addai-Sebo, pictured in London in 1988, established Black History Month in the UK to help inspire Black children.
Coincidentally, 1987 was the 150th anniversary of Caribbean emancipation, the centenary of the birth of Marcus Garvey and the 25th anniversary of the Organization of African Unity, an institution dedicated to advancing the progress of African states. The new London Strategic Policy Unit declared it African Jubilee Year, calling on UK authorities to recognize the contributions of Africans to the economic, cultural and political life of the UK, take their duties as enshrined in the 1976 Race Relations Act seriously, be relentless in their support against apartheid and ensure that Black children enjoy positive images of themselves.
The African Jubilee Year declaration gave birth to Black History Month. October was chosen because it was shortly after the UK summer vacation and was the traditional harvest period and time when African leaders gathered to settle differences and appraise the state of the community. The month is now dedicated in the UK to the celebration of the African Story in the creation of our one humanity. The greatest of all teaching is "Man, know thyself" and the national curriculum and the playground must not fail the Black Child. Many hands and brains helped to give birth to Black History Month and we salute them all.
Celebrities hand over Instagram accounts to Black women for UK Black History Month
<div class="zn-body__paragraph" data-paragraph-id="paragraph