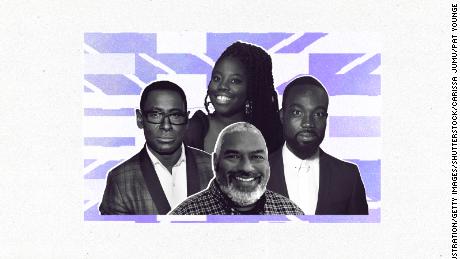 The film and TV industry has got Black characters wrong for decades. Meet the Black British creatives rewriting the script.

London (CNN)For a long time, the film and TV industry has relied on stereotypes to portray Black people. In Britain, a lack of authentic stories both about Black people, and by Black people, meant that generations of audiences turned to US exports like the films of Spike Lee, and TV programs like "My Wife and Kids." They may not have reflected everyday Black British experiences, but they were as close as viewers could get.

Things are starting to change. In the UK, more Black creatives are getting a chance to tell their stories, both in front of and behind the camera. Black actors, directors, writers and producers are making new films and TV shows featuring nuanced and authentic Black characters that go beyond the cliché.
The awards world is also making a concerted effort to become more inclusive. After years of widespread criticism about nominee lists and winners being dominated by White people, organizers of the Oscars, and its British equivalent, the BAFTAs, have taken steps to increase diversity.
While the academy behind the Oscars is working towards diversity quotas by 2024, the British Academy of Film and Television Arts (BAFTA) has focused on overhauling its internal and nomination processes. But progress has been slow. In 2020, not a single person of color was nominating in the BAFTAs' acting categories.
To celebrate Black History Month in the UK, CNN spoke to four people trying to change the industry from the inside.

"I May Destroy You" star Paapa Essiedu believes that Black creatives are finally starting to get more chances in the industry.
Read More
In what might have been one of the most confronting scenes on television this year, Kwame, a character in the TV drama "I May Destroy You," is pinned down and sexually assaulted by a Grindr date in London, just moments after having consensual sex with him. There are so many elements to the scene that are rarely depicted on television -- Black sex, gay sex, and the sexual assault of a man.
Paapa Essiedu, the actor who portrays Kwame, said the scene was about challenging what people expected sexual assault to look like. It was important to him to convey just how common it is, in all sorts of contexts.
"It happens a lot more than certain people think," Essidieu, 30, told CNN.
"It's important to connect with the truth of the world that's around us and what the world is like for not just you, but for that person that you might not know but your friend knows, or that your friend's friend knows, or that person that might be sitting next to you on the bus or the tube."
"I May Destroy You" is the brainchild of Michaela Coel, an actor and comedian who Essiedu went to drama school with. The show boldly explores the realities of consent and rape culture, while racial undertones also influence the experiences of its characters in the same subtle way that racism is often practiced today.
Essiedu says that there wasn't a conscious or concerted effort to make the characters in "I May Destroy You" explicitly Black. "It was never like we were trying to be on brand, trying to be diverse -- we just did what was true."
Essiedu made a name for himself as a theater actor, joining the Royal Shakespeare Company and National Theater in London. In his latest TV role, he plays Alexander Dumani in the drama "Gangs of London," which follows the story of vengeful high-crime gangsters. The way in which the show "teased out" the unruly nature of high-crime, coupled with the diverse types of families involved in the story, appealed to Essiedu.
Like his entire generation, and several be