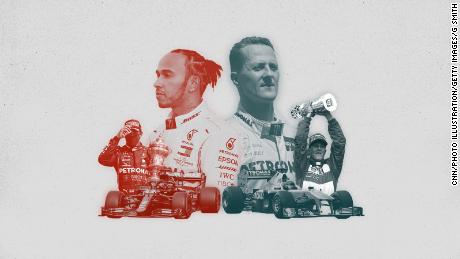 Lewis Hamilton vs. Michael Schumacher: Who is the greatest?

(CNN)It will be the question in pub quizzes for years to come. Where did Lewis Hamilton overtake Michael Schumacher's 91 race wins and become the all-time leader in Formula One Grand Prix victories?

History was made on Sunday at the Portimao Circuit in Portugal. A track which has never hosted a F1 race prior to this coronavirus-affected 2020 season, in a country where Hamilton had never raced an F1 car.
Both drivers are regarded as greats, racking up wins with Terminator-like ruthlessness, and Hamilton's career statistics mirror Schumacher's in a number of categories. So how to choose the greatest?

Off to a flying start

In an age where it seems only drivers from affluent backgrounds with heavy financial backing can make their way into F1, it is interesting that both Hamilton and Schumacher's parents sacrificed much for their sons' passions.
Read More
While Schumacher's parents worked multiple jobs and relied on the kindness of a local businessman to fund his karting career, Hamilton's father Anthony worked up to three jobs at one time and remortgaged his house.
Parental dedication paid off as both careers got off to a flying start.
Hamilton achieved his maiden F1 victory in only his sixth-ever race, aged 22.
The Englishman might even have won the championship in his debut season in 2007. He and teammate Fernando Alonso finished second and third respectively on 109 points each, with champion Kimi Raikkonen finishing just a point ahead.
Hamilton would have been the youngest F1 world champion at 22 years and 287 days -- a record which would have still stood. Nevertheless, he won the title the following year, at 23 years and 300 days.
With Hamilton starting his career in the then dominant McLaren, Schumacher faced an arguably stiffer test starting out, driving a Benetton car that was competing with some of the all-time great McLaren, Williams and Ferrari cars.
In 1992, Williams' Nigel Mansell won nine of the 16 races that year, with his teammate Riccardo Patrese winning one. McLaren's Ayrton Senna and Gerhard Berger won five races between them, leaving one remaining: Schumacher's maiden victory.
It came at the same track where he had made his debut just a year earlier: Spa-Francorchamps in Belgium. His risk to turn to slick tires from wets earlier than his competitors was an inspired move, and summed up the all-or-nothing approach he took when chasing victory.
The 1993 season was the final year of the Alain Prost-Ayrton Senna rivalry, and in 1994 Schumacher earned his maiden F1 world championship.
Acrimony often followed the German throughout his career, and 1994 set the tone for that.
Despite not recording a point in four races because of race bans, Schumacher took the title -- although it is still debated today as to whether his crash into rival Damon Hill in the final race was intentional or not.