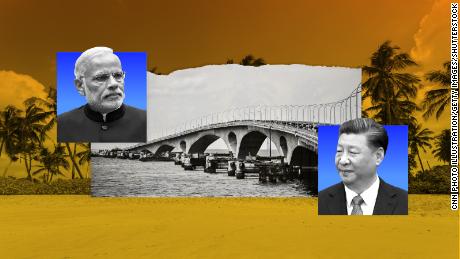 A tale of two bridges: India and China vying for influence in the Maldives

(CNN)In the heart of the Indian Ocean, a 2.1-kilometer (1.3-mile) bridge snakes out of an idyllic atoll, linking the Maldives' capital Malé with its international airport.

The China-Maldives Friendship Bridge, built with $200 million largely funded by Beijing, is among a growing list of Chinese projects in the tropical South Asian nation popular for its white sand beaches and turquoise lagoons.
But China's expanding footprint in the Maldives has unsettled neighboring India, which views the region as part of its traditional sphere of influence -- and at risk of being pulled away from its orbit.
In a move widely seen as an attempt to counter growing Chinese influence, India announced in August a $500 million package for its own bridge. Billed "the largest civilian infrastructure project" to be built in the Maldives, the 6.7-kilometer (4.1-mile) bridge and causeway will link Malé with three nearby islands, overshadowing the Chinese bridge in length, scale and price.
Completed in 2018, the China-Maldives Friendship Bridge is the flagship project of China's infrastructure boom in the Maldives.
The infrastructure race is another measure of the escalating geopolitical rivalry between India and China. In recent months, conflicts have flared along their disputed borders high in the Himalayas. Tension has also been building in the Indian Ocean, with New Delhi wary of Beijing's inroads into its backyard.
Read More
Under its former strongman president, Abdulla Yameen, who took power in 2013, the Maldives turned away from New Delhi and grew closer to Beijing, receiving hundreds of millions of dollars of Chinese funds to develop its coral islands. But Yameen's surprise election defeat in late 2018 gave India an opportunity to mend relations with its traditional ally, which owes China between $1.5 billion and $3 billion.
"For India, there are a lot of worries in regard to China," said Manoj Joshi, a distinguished fellow at the Observer Research Foundation, a New Delhi-based think tank.
"The Maldives is just too important for us," he added, citing its proximity to India's western coast. "There's nothing India can do in the Maldives to affect Chinese security, but there's a lot the Chinese can do in the Maldives to affect Indian security."

An archipelago of nearly 1,200 low-lying coral islands and fewer than half a million people, the Maldives is the smallest Asian country by both land size and population. But it spreads over a swathe of strategically important waters and shipping lanes in the Indian Ocean.
By some estimates, half of India's external trade and 80% of its energy imports transit the sea lanes near the Maldives. China's crude oil imports from the Middle East and Africa -- which as of last year accounted for 62% of its total imports -- also travel along these routes.
Given their geographic proximity and strong historic and economic ties, India was for decades the Maldives' cl