Hundreds of religious leaders have joined forces to push for a global ban on gay conversion therapies, treatments that claim to be able to change a person’s sexual orientation or identity.

More than 370 figures from the world’s main religions have signed the declaration, which also calls for an end to violence against and the criminalization of LGBT+ people, according to a press release published Wednesday.

So-called conversion therapies, also known as reparative treatments, rely on the assumption that sexual orientation can be changed or “cured” – an idea discredited by major medical associations in the UK, the United States and elsewhere.

Declaring the Sanctity of Life & Dignity of All 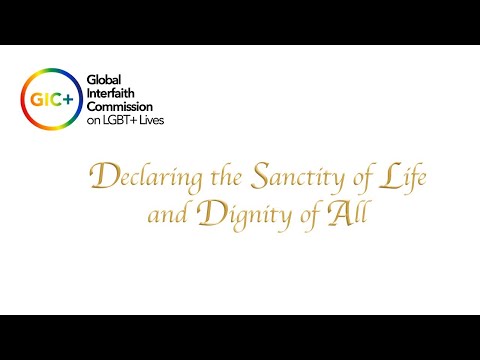 However they remain legal in many countries, including the UK, despite the country’s current government committing to end the practice.

In July 2020, Prime Minister Boris Johnson announced he would fast-track these plans, and the UK’s Foreign, Commonwealth and Development Office funded an online conference marking the launch of the commission Wednesday.

Jayne Ozanne, director of the Global Interfaith Commission on LGBT+ Lives, said the declaration is a landmark.

“We’ve never had such a powerful, clear and supportive statement from so many leaders,” Ozanne told CNN.

She called on politicians to act to ban conversion therapy.

“I do not think that any government can be deaf to the cries of survivors,” she said, adding that people are still being traumatized while politicians dally.

“We need to act with some urgency,” Ozanne said.

Campaigners also released a video of the declaration, featuring senior religious leaders such as the Right Reverend Paul Bayes, the Bishop of Liverpool.

“For too long, religious teachings have been misused – and are still being misused – to cause deep pain and offence to those who are lesbian, gay, bisexual, transgender, queer and intersex,” said Bayes in the press release.

Rainbow flags in front of the Brandenburg Gate at an event organised by the SPD to celebrate the legalization of same-sex marriage in Berlin, Germany, June 2017.
Michael Kappeler/picture alliance/Getty Images

The commission “aims to provide a strong and authoritative voice amongst those who wish to affirm the sanctity of life and the dignity of all,” he added.

The declaration asks for forgiveness for the harm that some religious teachings have caused LGBT+ people and calls for everyone to “celebrate inclusivity and the extraordinary gift of our diversity.”

Reverend Canon Mpho Tutu van Furth, daughter of Archbishop Desmond Tutu and his wife, Leah, was one of the speakers at Wednesday’s conference.

“There are many LGBT+ people who suffer emotional hurt and physical violence to the point of death in countries across the world,” she said in the press release. “For this reason, we are joining forces as faith leaders to say that we are all beloved children of God.”

'A legal form of abuse': Conversion therapy is lurking in the shadows

Malta – a tiny island nation in the Mediterranean with a population of just over 400,000 – made history by implementing a nationwide ban on conversion therapy in 2016.

And in May, Germany’s parliament approved a ban on conversion therapies for minors, and for adults who have been forced, threatened or deceived to undergo the controversial treatment.

However, in April the International Rehabilitation Council for Torture Victims (IRCT) and the Independent Forensic Expert Group (IFEG) said conversion therapies are still used in more than 69 countries.

The organizations called for a global ban on the practice, which they classify as a form of torture.

In June, the United Nations Independent Expert on Sexual Orientation and Gender Identity, Victor Madrigal-Borloz, also called for a global ban on the practice.