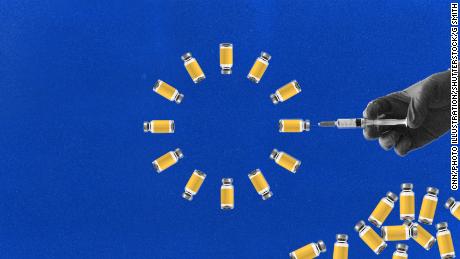 The EU is plagued with divisions. Covid-19 vaccines are a golden chance to redeem the European project

(CNN)In the name of "science and solidarity," the European Commission has secured over 2 billion doses of coronavirus vaccines for the bloc since June.

Now, as European Union regulators edge closer to approving two of those vaccines, the commission is asking its 27 nations to get ready to work together to roll them out.
If it all goes to plan, the EU's vaccine program could go down as one of the greatest achievements in the history of the European project.
The EU has suffered a sustained battering in recent years, fueled by the UK's departure, a surge in nationalist parties, and Euroskeptic attitudes across the continent.
And so far, the coronavirus crisis has only exacerbated existing tensions.
Read More
Early in the pandemic, a messy bidding war for personal protective equipment raged between member states, before the commission established a joint procurement program to stop it.
In July, the bloc spent days battling over the terms of a landmark €750bn (US $909bn) coronavirus recovery fund, a bailout scheme that links payouts with adherence to the rule-of-law and the upholding of democratic ideals, including an independent judiciary. Hungary and Poland vetoed the deal in November, forcing the bloc to broker a compromise, which was agreed last week.
And in the fall, member states spent more than a month squabbling over the commission's proposal to streamline travel guidelines around quarantine and testing.
But when it comes to the EU's vaccine strategy, all member states -- along with Norway and Iceland -- have jumped on board, marking a step toward greater European unity.
The commission says its aim is to ensure equitable access to a coronavirus vaccine across the EU -- and given that the virus knows no borders, it is crucial that countries across the bloc cooperate and coordinate.
But a collective approach will be no small feat for a region that encompasses disparate socio-political landscapes as well as wide variants in public health infrastructure and anti-vaccine sentiments.

The EU has secured enough potential vaccine doses to immunize its 448 million citizens twice over, with millions left over to redirect or donate to poorer countries.
This includes the purchase of up to 300 million doses of the Pfizer/BioNTech vaccine and up to 160 million from US biotech company Moderna -- the current frontrunners. The European Medicines Agency (EMA) -- which evaluates medicines and authorizes their use across the EU -- is expected to authorize the Pfizer/BioNTech vaccine on December 21 and Moderna in early January.
The first rollout will then begin on December 27, according to European Commission President Ursula von der Leyen.
The agreement also includes up to 400 million doses of the British-Swedish Oxford/AstraZeneca offering, whose first batch of clinical trial data is being reviewed by the EMA as part of a rolling review.
Last week, following mixed results from its clinical trials, AstraZeneca announced it would also begin a joint clinical trial with the makers of the Russian Sputnik V vaccine, to find out if a combination of the two vaccines could offer improved protection from the virus.
The EU's deal has also secured up to 405 million doses from the German biotech Curevac; up to 400 million from US pharmaceutical giant Johnson & Johnson; up to 200 million doses from the US company Novovax; and up to 300 million doses from British and French companies GlaxoSmithKline and Sanofi, which announced last Friday that the release of their vaccine would be delayed until late next year.
These all serve as a down-payment for member states, but ultimately each country will have to buy the vaccines on their own. The commission has also offered guidance on how to deploy them, but how each country gets the vaccine to its citizens -- and who they choose to prioritize -- is entirely up to them.
Most governments have, however, signaled that they are planning to follow EU guidance on prioritizing the elderly, healthcare workers and vulnerable populations first, according to a recent survey by the European Centre for Disease Prevention and Control (ECDC).
On Tuesday, eight countries -- Belgium, France, Germany, Italy, the Netherlands, Spain and Luxembourg (as well as Switzerland, which is not in the EU) took this a step further by making a pact to coordinate their strategies around the rollout. The joint plan will facilitate a "rapid" sharing of information between each country and will streamline travel guidelines for cross-border workers, who will be prioritized.
Martin McKee, professor of European public health at the London School of Hygiene and Tropical Medicine, said it is a good idea to take a coordinated approach, to instill greater confidence among the public and to mitigate the risk of any differences being exploited by the anti-vaccine movement. But he added that it is understandable that governments also want to make their own decisions.
He highlighted the cases of Ireland and France, which have both said they plan to also prioritize people working or living in high-risk environments where the disease is easily transmissible, such as in Ireland's meat packing industry or France's transport sector.
<div class="zn-body__paragrap