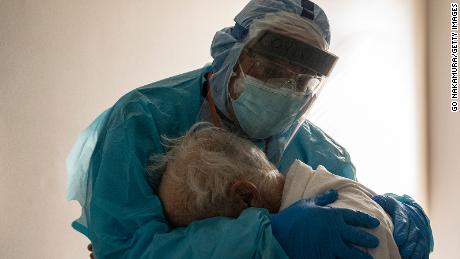 We're entering year two of the pandemic. Here's what happens next

(CNN)Our global coronavirus nightmare is entering its second year, and we're hanging on the best we can.

Our lives have been turned upside down, the economy is sputtering and more than 1.8 million people have died -- 351,000 of them in the US, more than any other country in the world.
As a nation, we're exhausted. American hospitals and health care workers are overwhelmed. The grief and trauma are piling up. The vaccine rollout is behind schedule, a new strain of the virus has emerged and experts fear a post-holiday explosion of new cases and hospitalizations.
The next few months will likely be dark and painful. But there's a promise of light on the horizon. With two vaccines approved in the US and more on the way, there's hope for a gradual return to normalcy -- whatever that looks like in a post-pandemic world.
Here's what to expect in this new year.
Read More

The next few months will be rough

We've had a tough holiday season -- and things aren't expected to get better for at least the next few weeks.
In December alone in the US, we lost more than 77,000 people. It was the deadliest month of the pandemic so far, and health officials fear the ripple effects of holiday gatherings will soon make things worse.
More than 1.1 million travelers jammed US airports the Monday after Christmas. The urge to connect with loved ones after months apart could bring another wave of infections and hospitalizations -- yet another setback in our long fight to contain the virus. By some estimates, 80,000 Americans could die in the next three weeks.
The grinding pandemic has taken a mental and physical toll on many health care workers.
"The next couple of months are going to be awful," says Dr. Jonathan Reiner, professor of medicine at George Washington University. "We're going to lose 3,000, maybe more, people a day, probably until we're well into February. And then, we should start to see some light."
Government officials are preparing for dire scenarios. Health care workers are setting up rooms for sick patients in hallways, lobbies and parking lots.
In hard-hit Southern California, ICUs are at capacity and officials have extended stay-at-home orders. Atlanta hospitals are over capacity, with some people waiting days to be admitted. Georgia's governor opened an overflow coronavirus unit at a downtown convention center.
One epidemiologist in Los Angeles says the US is now beyond waves or surges. "This is a viral tsunami that we are now experiencing," he says.

Officials will have to move faster on vaccinations

First the good news: Sleeves are rolling up across the country for the highly effective Pfizer and Moderna vaccines.
More than 4.2 million people have received the first of the two doses required to protect against the virus.
The rollout has been bumpy. With no federal mandate for how to administer the vaccine, it's up to the states to decide who gets the shots and when, creating a confusing patchwork of rules that vary across the country.
Some 13 million doses have been distributed so far, but we've fallen short of the goal to vaccinate 20 million people by January 1.
A pharmacist moves 975 doses of the Pfizer-BioNTech Covid-19 vaccine to a freezer on December 15, 2020 in Aurora, Colorado.