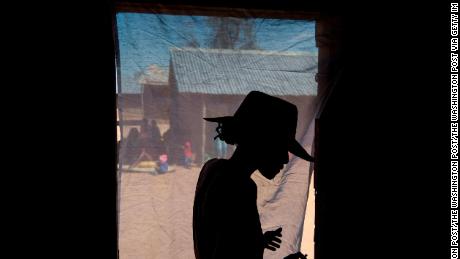 BESAKOA, MADAGASCAR - APRIL 9: Claudia Rasolomamy, a community health worker in Besakoa, enters the consultation room to talk to Dr. Jean Rangomana between patient appointments during the Marie Stopes International mobile clinic in Besakoa, Madagascar on April 9, 2018. He estimated that he would see at least 50 women seeking family planning during the clinic that day. Community health workers inform their communities about the services provided by the mobile clinics and help explain to women why family planning and reproductive health are important in the weeks prior to the mobile clinic's arrival. They also help Marie Stopes International gauge the demand for services in rural communities like this one, so the organization can try to meet the demand. (Photo by Carolyn Van Houten/The Washington Post via Getty Images)

'You can't just remove the damage of the last four years'

For more than four years, countries that rely on American foreign aid have been reeling from the profound impact that Donald Trump's reinstatement of the Mexico City policy has had on women.
The policy, known as the "global gag rule" among opponents, prevents non-government organizations that provide abortions, give counseling about abortions, or advocate for safe access to abortion from receiving US funding.
But while the policy is meant to stop abortions, research shows that it has the opposite effect -- and with deadly consequences for women. One 2019 study published in The Lancet found that during previous periods when the policy was in effect, abortions increased by 40% compared to periods where it was rescinded, contraceptive use dropped by 13.5% and pregnancies rose by 12%.
On Thursday, US President Joe Biden rescinded the policy through a presidential memorandum, with reproductive rights advocates hailing it as a victory for the health and lives of women, girls and people who can become pregnant.
During a signing ceremony in the Oval Office, Biden said the move will "reverse my predecessor's attack on women's health access."
Read More
He added that the measure "relates to protecting women's health at home and abroad, and it reinstates the changes that were made to Title X (a family planning program that prohibits federal funds from being used for abortions) and other things making it harder for women to have access to affordable health care as it relates to their reproductive rights."
While the announcement has been welcomed by women's rights groups and their advocates, and they are working toward a permanent repeal, they stress that the collateral damage of the Trump-era policy is vast, and that it will take more than just an announcement to rebuild entire health systems fractured by the policy.
That's because while previous incarnations of the rule under other Republican presidents primarily targeted family planning programs, Trump's supersized version (the Protecting Life in Global Health Assistance policy) impacted a wide spectrum of US funded health programs, spanning from HIV/AIDS prevention and treatment to malaria, tuberculosis, food, water, and sanitation programs.
In 2019, Trump took that policy a step further, announcing the withdrawal of funding from any organization that provides funding to other groups that carry out abortions or discuss abortions with their clients.
In total, the Trump administration's expansion of the rule increased the amount of money affected by the policy by nearly 20-fold, from approximately $600 million to an estimated $12 billion.
The loss of that funding cannot be overstated, according to organizations who refused to comply with Trump's policy.
MSI Reproductive Choices, a global non-profit that provides family planning advice and sexual health services, is one of them. The group said in a 2020 report that they lost $30 million in funding, money that over the course of Trump's term they say would have served an estimated 8 million women with family planning services that would have prevented an estimated 6 million unintended pregnancies, 1.8 million unsafe abortions and 20,000 maternal deaths.
MSI Reproductive Choices' Ethiopia country director Abebe Shibru, who was the country director for MSI Zimbabwe during most of Trump's term, said the policy "undermined the rights of women to exercise their rights to reproductive health."
Shibru told CNN that after the policy was reinstated, MSI's outreach locations and services across Zimbabwe were slashed in half, shuttering reproductive health access for millions of disadvantaged women living in the country's most remote areas. It's a scenario that has been unfolding across many parts of Africa, he said, and one that will take time to repair.
"You can't just remove the damage of the last four years," Shibru said. "It will take time."

Melvine Ouyo, a Nairobi-based reproductive health nurse and former clinic director at Family Health Options Kenya agrees, explaining that the effects of the policy didn't just damage maternal health, but also impacted services including malaria, HIV and sanitation -- and drove a wedge between crucial health partnerships, as groups that accepted the policy's conditions became wary of contact with groups that did not. "They could not coordinate openly," Ouyo said, explaining that she believes the groups who did accept the policy's conditions were concerned about losing funding.
A United States Agency for International Development (USAID) spokesperson told CNN in November that "When a foreign NGO declines to agree to the (Protecting Life in Global Health Assistance) Policy, USAID transitions the activities that NGO would have undertaken, with US funding, to other partners, while minimizing any disruption of care." However, a State Department review from August 2020 found that the policy did disrupt some efforts to treat tuberculosis and HIV/AIDS and to deliver nutritional assistance, among other programs.
Ouyo said that the policy created a "chilling" effect not just in Kenya but across many other countries in Africa.
"It created misunderstanding and lack of trust and made it hard for civil society groups to work in partnership," she said.
Ouyo also detailed another unexpected outcome of the policy: self-censorship. Organizations that accepted the conditions of the rule have declined to speak openly about