By Megan Alldridge and Stefanie Blendis, CNN
Updated 2:26 PM EST, Fri February 19, 2021
Link Copied!
Marine biologist Erika Woolsey wanted to find a way to allow people to see for themselves the damage being done to the oceans.
Pete Niesen
Through her non-profit, The Hydrous, Woolsey is using virtual reality to "bring the ocean to everyone." She hopes to raise awareness of reef damage and inspire action to protect our seas.
The Hydrous
As a habitat, coral reefs rival the biodiversity of rainforests, with an estimated 25% of marine species depending on them. However, climate change, pollution and overfishing have decimated around half the world's shallow-coral reefs.
Erika Woolsey/The Hydrous
Woolsey, who has been diving for over two decades, witnessed first-hand these changes and set out to recreate this experience with her team in their award-winning film, "Immerse."
Rick Miskiv
Over the course of the film, participants are taken on a dive with Woolsey on the coral reefs off the western Pacific Island of Palau. They swim with manta rays, sea turtles and sharks as well as witnessing the state of the reefs.
Pete Niesen
To capture the footage a VRTUL2 camera was used, made up of 13 Black Magic cameras, 12 of which are mounted in pairs eye-width apart. The team timed their expedition based on the moon phases and marine life behavior, with spectacular results.
Pete Niesen
Since June 2020, almost 1 million people, aged eight to 90 have taken part in virtual dives. Woolsey said that the dives offer people a much-needed connection to each other amid global lockdowns.
Pete Niesen
Woolsey and her team hope that the experience creates a sense of "universal ocean empathy" and have plans to expand to underexplored seas once advances in technology allow.
The Hydrous

Diving in the oceans, marine biologist Erika Woolsey has seen first-hand how coral reefs and sea life are being damaged by climate change. It has made her determined to find a way for others to share her experience – including those who can’t easily explore the ocean.

Through her non-profit, The Hydrous, Woolsey is using virtual reality to “bring the ocean to everyone.” The San Francisco-based collective of scientists, filmmakers and divers is taking people on immersive virtual dives to create a sense of “universal ocean empathy,” raising awareness of reef damage and inspiring action to protect our seas.

As a habitat, coral reefs rival the biodiversity of rainforests, with an estimated 25% of marine species depending on them. However, climate change, pollution and overfishing have decimated around half the world’s shallow water coral reefs.

Two decades of underwater exploration have given Woolsey, 36, an intimate understanding of the threats facing reefs. “I’ve seen first-hand this … shift from a healthy colorful vibrant coral reef, to what looks like a moonscape,” Woolsey says. “When the coral goes … so do the fish, so do the other animals that depend on the reef and human societies that rely on those ecosystems for their livelihood.”

It is this experience The Hydrous team set out to recreate with their award-winning film “Immerse.” Intended to be watched with a VR headset, viewers join Woolsey for a nine-minute guided virtual dive on the coral reefs off the western Pacific Island of Palau, immersed in a 360-degree underwater view.

Read: How NASA technology can help save the world’s biggest shark

They swim alongside manta rays, sea turtles and sharks before witnessing the deterioration of the reefs. The experience often elicits strong reactions. “As soon as people take off that headset and look me in the eye, they want to tell me a story about their ocean experience,” Woolsey says. “It’s that human connection to our ocean that will solve our ocean problems.”

“Immerse” premiered at the International Ocean Film Festival in 2019 and has won awards including the EarthXFilm 2019 Official Selection. Woolsey has also led live virtual dive events, including guiding 450 participants at the National Geographic VR Theater in Washington in 2019. 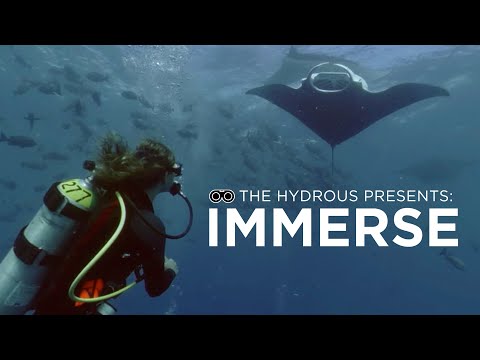 VR in a pandemic

However, it has been in the last year, amid global lockdowns, that virtual dives have truly come into their own. Since June 2020, almost 1 million people, aged eight to 90, have taken part in virtual dives. A much-needed “tool for teleportation” at a time when people are confined to their homes, Woolsey says the dives also offer people a connection that goes beyond the ocean.

A protected manta ray swims in the waters of Maldives
video

Swimming with manta rays could help save them

“Right now, we’re not only disconnected from our oceans but also each other, so these dives are a wonderful tool to connect us more to our natural environments as well as to each other,” she says.

Woolsey hopes advances in camera technology will allow her team to “take more and more people to places in the ocean that are underexplored … places further away from human civilization.” They are developing a virtual experience that will put the participant in the role of a marine biologist, tracking and monitoring manta rays, conducting biodiversity surveys underwater, and even transporting the viewer to space to monitor global sea surface temperatures.

Ultimately, Woolsey’s message about our oceans is a positive one. The VR technology shows not only the state our oceans are in but how they have a chance to recover. It is this that Woolsey says people take away with them after the experience. “When we ascend, we ascend with a message of hope that we bring back to land,” she says.

This story has been updated to correct the date when “Immerse” premiered.