All living former Presidents Jimmy Carter, Bill Clinton, George W. Bush, Barack Obama and their respective former first ladies – with the exception of the Trumps – are part of a newly released ad campaign urging Americans to get the coronavirus vaccine when it is their turn, a push that is aimed squarely at combating vaccine skepticism.

The ad campaign reunites almost every member of the so-called President’s Club, the group of living former commanders in chief. Former President Donald Trump and former first lady Melania Trump are not featured in either ad, the only living president and first lady to not participate. CNN has previously reported that both received the coronavirus vaccine in January at the White House but did not publicize the fact until weeks after they had left Washington. On Wednesday, before the ad was published, Trump put out a statement claiming credit for the vaccine, but he was not included in the ad promoting it to the American people.

There are two ads in the campaign: a minute-long, more personal spot that shows the four former presidents and former first ladies receiving their vaccines, and another that features Clinton, Bush and Obama standing together to urge Americans to step up and get vaccinated.

Former Presidents and First Ladies ‘It’s Up To You’ :60 | Ad Council and COVID Collaborative 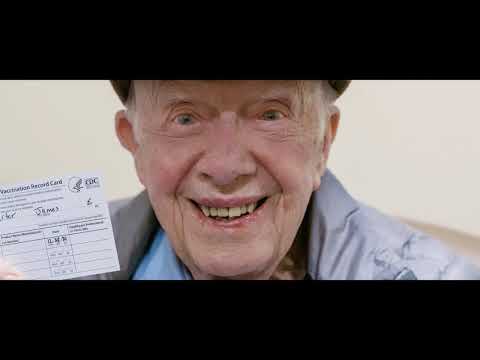 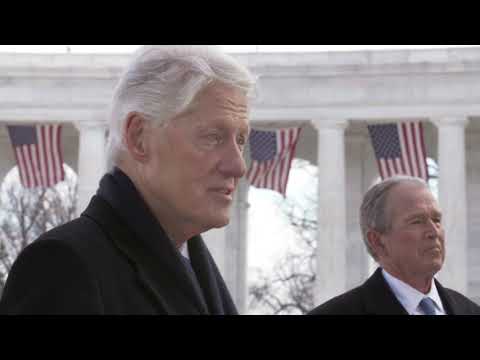 The ads are being released at a critical time in the fight against the coronavirus and one year after the outbreak was first declared a pandemic.

With vaccines becoming more widely available in cities and states across the country, those in charge of getting vaccines in the arms of Americans are eager to use the influence of people such as the former presidents to push people to get their shots. Vaccine hesitancy remains an issue, even as the number of people hesitant to get the vaccine has been dropping rapidly.

The longer spot begins with Bush touting that Covid vaccines will “soon be available to everyone,” before Obama says that the vaccine means “hope” that it “will protect you and those you love from this dangerous and deadly disease.”

The ad then turns to the presidents describing what they have missed during the pandemic and why they want to be vaccinated. Clinton says he wants to “go back to work” and to “be able to move around.” Obama says he misses visiting his mother-in-law and he wants to “hug her and see her on her birthday.” And Bush says he is “really looking forward to going to Opening Day in Texas Rangers Stadium with the full stadium.”

Carter does not speak on camera, but the 96-year-old President says during the spot that he is getting vaccinated “because we want this pandemic to end as soon as possible.”

The ad ends with all four former presidents urging Americans to get the vaccine as images of Jimmy and Rosalynn Carter, Barack and Michelle Obama, George and Laura Bush and Bill and Hillary Clinton all getting their vaccines are shown.

“So, we urge you to get vaccinated when it is available to you,” Obama says.

“Roll up your sleeve and do you part,” Bush says.

“This is our shot,” Clinton says.

“Now it is up to you,” Carter concludes, as an image of the smiling former President holding his vaccine card closes the ad.

According to CNN data, about 93.7 million vaccine doses have been administered in the United States, with the Food and Drug Administration issuing emergency use authorizations for three vaccines: The two-shot Pfizer/BioNTech and Moderna vaccines and the single-dose Johnson & Johnson one.

The coronavirus has infected over 29 million people in the United States, killing over 529,000 Americans. The death toll worldwide has reached roughly 2.6 million.

The second spot features Clinton, Bush and Obama standing together at Memorial Amphitheater at Arlington National Cemetery. The three were there on January 20 for a ceremony during President Joe Biden’s inauguration.

The ad is framed like an address by the three former presidents to the American people, with Bush beginning the ad by saying, “Our fellow Americans,” before Clinton says, “Right now, the Covid-19 vaccines are available to millions of Americans” and Obama adds, “And soon they will be available to everyone.”

“The science is clear, these vaccines will protect you and those you love from this dangerous and deadly disease,” Bush says. “So, we urge you to get vaccinated when it is available to you.”

“That’s the first step to ending the pandemic and moving our country forward,” Obama says. “It’s up to you.”

The ads are part of a collaboration between the Covid Collaborative project and the Ad Council, a nonprofit organization the produces and promotes public service announcements. The council said the project with the four former presidents and first ladies began in December 2020 and are being released on Thursday because vaccines are becoming more widely available.

“In this pandemic, we need every American to help so that all Americans can recover,” said former Republican Gov. Dirk Kempthorne of Idaho and former Democratic Gov. Deval Patrick of Massachusetts, the co-Chairs of the COVID Collaborative. “These former Presidents and First Ladies have come together to show that each of us, regardless of political party, has a stake in beating this virus.”

The Ad Council said the ads would appear nationwide during time and space donated to them by a range of television and digital platforms. They will begin airing this week.

In statements provided to CNN, each former president urged Americans to get vaccinated.

“Over the past year, the pandemic has taken an immeasurable toll on families all across the country and upended everyone’s lives,” Obama said, noting he and Michelle got vaccinated “because we know it’s the best way to get the country back up and running again.”

Bush said he and Laura “are grateful for the dedicated scientists and researchers who enabled safe and effective vaccines to be developed so quickly” and urged Americans to get the vaccine.

Clinton said that America “has always been at its best when we are looking out for one another and pulling together in common cause,” adding that he and Hillary believe the vaccines will “bring us all one step closer to ending this pandemic.”

And Carter said he and Rosalynn got the vaccine so they could “get back to church, see our children, grandchildren and great-grandchildren, and eventually be active in our community again.”

“I encourage everyone to get a vaccine when it’s their turn,” he added.

The Biden administration has made getting Americans vaccinated central to both its fight against the coronavirus and its messaging around the success of the President’s first 100 days in office. Biden made a pledge early in his administration to get 100 million shots in arms within his first 100 days, a goal he appears likely to achieve. Biden will deliver his first primetime address to the nation on Thursday night, where he will mark the one-year anniversary of the pandemic.

CLARIFICATION: An earlier version of this story misstated the relationship between the groups that created the ad. The Covid Collaborative is a partner of the Ad Council.