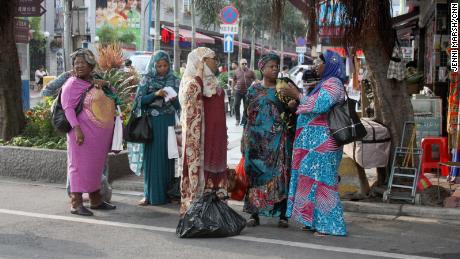 A group of African women in Denfeng village, Guangzhou, in 2019.

Covid-19 drove hundreds of Africans out of Guangzhou. A generation of mixed-race children is their legacy

(CNN)When the coronavirus pandemic ground China to a near-halt in early February last year, Youssouf Dieng jetted back to Dakar for, he thought, a brief sojourn.

In reality, it was a year before Dieng -- who had worked as a goods trader in the manufacturing hub of Guangzhou in southern China for two decades -- could return, on an air ticket three times the usual cost, and a complicated business visa. By then, the pandemic had driven hundreds of Africans out of Guangzhou, sparked the most severe anti-Black racial clashes in China in decades, and remade business operations, with Chinese factories connecting with African customers directly over e-commerce platforms.
"Now it is very, very quiet," Dieng says of Little Africa, a nook of Guangzhou informally named after the swell of thriving African businessmen who once lived, ate and prayed there in huge numbers. "Not many foreigners now, and all the small shops are closed. Small business around here? No more."
A shop in Little Africa in Guangzhou in 2019. Many small stores in this area are now shuttered.
At the turn of the 21st century, Guangzhou -- already a magnet for internal migrants -- became an accidental experiment in multiculturalism in China, as loose immigration rules and factories churning out cheap products attracted droves of African entrepreneurs.
Business boomed, and by 2012 as many as 100,000 Sub-Saharan Africans had flocked to the city, according to Prof. Adams Bodomo's book "Africans in China." While that figure was never verified, it pointed to the generally accepted opinion that, between 2005 and 2012, at least, this was the largest African expatriate community in Asia.
Read More
As interracial marriages in the community flourished, Bodomo theorized that, in time, an African-Chinese minority would arise, becoming China's 57th ethnic group and demanding full citizenship rights. Today, that looks unlikely. By April last year, just 4,550 Africans were living in Guangzhou, according to local authorities, including students and diplomats as well as businesspeople.
Ten months on, more than a dozen experts and Africans who spoke with CNN said that number has further dwindled, due to several repatriation flights to Nigeria and Kenya, and tougher coronavirus-era visa rules, with most foreigners barred from entry to China. Many who remain are rooted in China by Chinese wives and children.
"For the whole issue of African traders in Guangzhou, I suspect that era is over," says Gordon Mathews, professor and chair of the Department of Anthropology at the Chinese University of Hong Kong. "I'm skeptical that (their physical presence in the city) will ever be at the scale that it has been."

One reason for the decline of the African community over the past year is strictly business.
In 2019 alone, of the 2.95 million foreigners entering China through Guangzhou, 358,000 were from African countries, according to local officials. Many came on quick visits to buy from the region's factories, using African residents as middlemen to connect with Chinese wholesalers.
When <a href="https://www.cnn.com/spec