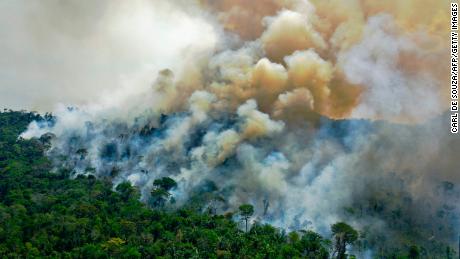 Aerial view of a burning area of Amazon rainforest reserve, south of Novo Progresso in Para state, on August 16, 2020.

(CNN)In 2000, when the internet in Brazil was still in its infancy, an email with an alarming message about the Amazon went viral. It claimed that the United States and the United Nations had taken the forest from Brazilians and transformed it into a protected area -- a falsehood, but one that reflected a long-running conspiracy theory still promoted today by Brazilian President Jair Bolsonaro.

The email described a purported geography textbook being used in "important American schools," which labeled the Amazon as an "international control zone." Next to a map, a misspelled text said that the forest was "surrounded by irresponsable, cruel, and authoritary countries" and that the United States and the United Nations, with the backing of the "G23," transformed it into "an international park with very severe rules of exploration."
"The value of this area is unable to calcule," it continued, "but the planet can be cert that The United States won't let these Latin American countries explorate and destroy this real ownership of all humanity."
Despite the multiple signs that the textbook was fake -- the writing was riddled with mistakes, the map looked doctored, and the obvious fact that the Amazon had not been turned into an international reserve -- the rumor touched a chord with Brazilians, circulating so widely that both the Brazilian embassy in Washington and the American embassy in Brasília tried to debunk it. "The idea is so hilarious that I feel silly to have to talk about it," Anthony Harrington, the American ambassador in Brazil, said at the time, according to news website G1.
But the viral image also illustrates a pervasive fear that grips Brazil and that has profound consequences for the forest.
Read More
Jair Bolsonaro, Brazil's president, speaks during the UN General Assembly meeting in New York, U.S., on Tuesday, Sept. 24, 2019.
President Bolsonaro has repeatedly invoked the idea that the Amazon is under threat from a foreign takeover as he pushes back against foreign leaders, indigenous groups, and environmental organizations when they show concern for the forest, demand more reservation areas, or denounce environmental destruction.
Deforestation in Brazilian Amazon surges to 12-year high
In May 2018, during his campaign for president, President Bolsonaro hinted at the conspiracy theory: "The Amazon is not ours," he claimed. "I say that with a lot of sadness, but it is a reality." Later that year, after being elected but before taking office, he threatened to withdraw from the Paris climate agreement, claiming that it weakened Brazilian control over the Amazon.
And in April 2019, already in power, he spoke openly about a murky plot to steal the forest from Brazil that involved the creation of indigenous reserves. "If we don't change our policies, we will lose the Amazon," he said in a radio interview with Jovem Pan. "The United Nations has been discussing, for a while now, that through the auto-determination of indigenous peoples, you could have new countries here inside," he added. "That could happen."
<div class="zn-body__paragraph" data-paragraph-id="paragrap