Earlier this summer, a new princess giddily square-danced onto the scene. They’ve got blue fur, a nose shaped like a hook and a thing for chickens. They’re a Muppet – one you’ve probably known for a while.

Their name is Gonzo-rella, the royal alias of Gonzo the Great. The idiosyncratic Muppet is perhaps best known for performing daredevilish stunts gone wrong. But now, Gonzo is the latest gender-diverse character on a children’s TV show – and on a Disney network, no less.

“Gender diversity refers to the extent to which a person’s gender identity, role, or expression differs from the cultural norms prescribed for people of a particular sex.”Source: American Psychological Association

Gonzo-rella made their debut on an episode of the Disney Junior series “Muppet Babies,” in which Gonzo longs to don a sparkly gown to Miss Piggy’s royal ball. With the flick of one Fairy Rat-father’s wand, Gonzo gets to rock the dress of their dreams – in disguise – to the delight of the Muppet Babies. At the end of the tale, the mystery princess bravely reveals themselves to be Gonzo, whom the rest of the Muppets assumed would dress as a knight like Kermit and Fozzie Bear.

“I don’t want you to be upset with me, but I don’t want to do things because that’s the way they’ve always been done either,” Gonzo tells their friends with newfound confidence. “I want to be me.”

The “Gonzo-rella” episode of “Muppet Babies” is one of the most recent and widely celebrated examples of animated children’s television tackling nonbinary and gender-diverse identity. Earlier this year, “Blue’s Clues & You” shared an animated Pride Parade that featured a nonbinary dolphin that used a wheelchair. Series for older kids, like “She-Ra and the Princesses of Power” and the pioneering “Steven Universe,” center romantic storylines for nonbinary and LGBTQ characters and positive depictions of self-discovery and acceptance.

“Nonbinary is an identity embraced by some people who do not identify exclusively as a man or a woman. Nonbinary people may identify as being both a man and a woman, somewhere in between or as falling completely outside of these categories.” Source: Human Rights Campaign

For children whose gender expression may not subscribe to preconceived notions of what a boy or girl should look or act like, it can be hugely significant to see themselves reflected onscreen, even if the characters are puppets or whimsical gem-people who live in a pastel wonderland, said Lindsay Toman, an assistant professor of LGBTQ studies at Colgate University.

Representation alone does not make a story strong. It’s rare for characters to mention the words “nonbinary” or “gender-diverse” on the aforementioned series. But on each of these series, characters whose identities don’t fit neatly within the gender binary are celebrated by their friends on the show and respected by their series’ creators in storylines that are largely positive.

“Everyone can benefit from being validated in their identities,” Toman told CNN. “What is important is that all younger children are seeing positive images so that they can better learn about themselves and other people.”

When “Gonzo-rella” aired this summer, it seemed to cement what some fans of the Muppets believed about Gonzo – that the chicken-loving Muppet is nonbinary. But to very young viewers – “Muppet Babies” is geared at kids ages 4 and up, according to Common Sense Media – it introduced a protagonist who shirks labels and gender norms.

In under 15 minutes, Gonzo gets heartbroken, dresses up and has the time of their life at a ball. And though the Muppet moppets are at first surprised to learn Gonzo was their mysterious princess, they support their “Gonzo-rella” wholeheartedly, throwing out the “royal handbook” that once decreed male-presenting Muppets would have to wear knight costumes to a ball. 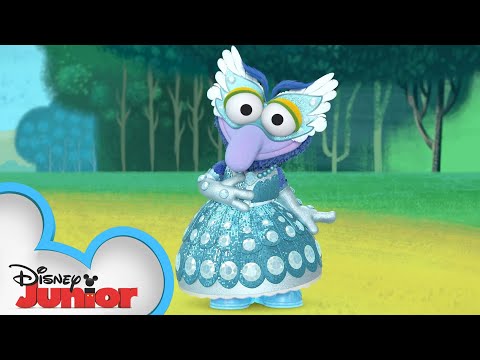 Gonzo doesn’t formally come out in the episode as nonbinary. But Gonzo’s dream of donning a beautiful gown isn’t played for laughs – their desire is sincere, as is their fear that their friends won’t accept them. Miss Piggy even uses “they” and “them” pronouns to refer to “Gonzo-rella.” Critical response to the episode was largely positive, save for a few vocal exceptions.

“Gonzo-rella” is just one episode in a long tradition of children’s TV covering complicated topics in terms young viewers can understand. “Sesame Street” has taught children about death, racism and addiction through puppets. On “Mister Rogers’ Neighborhood,” everyone’s favorite neighbor talked about gun violence after a series of high-profile shootings. Kids’ series can broach subjects that parents may not know how to discuss while meeting children where they’re at.

Rebecca Sugar, the creator of Cartoon Network’s sweet, contemplative series “Steven Universe” and its sequel, had a feeling young viewers would understand her characters without labeling them. The cast is full of characters who are nonbinary, LGBTQ or otherwise challenge the gender binary through their gender expression.

“We knew kids would get it,” Sugar told CNN in an email. “Kids love good stories and funny cartoon characters! It was hard to convince adults that LGBTQIA+ stories and characters could be good and funny, but kids weren’t worried about that. They were too busy watching the show!”

“Steven Universe,” which premiered in 2013, stars a half-human boy and his family of feminine Crystal Gems. While the series is full of humor and hijinx, its soul lies in exploring its characters’ identities and the ways in which they evolve.

Take an early episode, in which Steven and his friend/love interest Connie “fuse” – that is, the two physically and mentally bond and form one, tall, model-esque being who enchants men and women alike. Becoming “Stevonnie” inspires both Steven and Connie to access a confidence they never knew they had, even though the two later resume their lives as separate people.

"Stevonnie," a fusion of the "Steven Universe" characters Steven and Connie, is one of several gender-diverse, LGBTQ or nonbinary characters on the children's series.
Steven Universe/Youtube

“You are not two people, and you are not one person,” says Garnet, a Crystal Gem who themselves is a fusion of two Gems, in a supportive conversation with Stevonnie. “You are an experience! Make sure you’re a good experience.”

Another beloved episodes sees the two halves of Garnet, the Gems Ruby and Sapphire, get engaged after a lengthy relationship (Crystal Gems are all nonbinary women, as Sugar has said in previous interviews). And an episode of the epilogue series, “Steven Universe Future,” introduces the nonbinary character Shep, voiced by actor Indya Moore, who is transgender and nonbinary, as a new partner for Steven’s friend Sadie.

“Steven Universe” doesn’t do subtle hints or winks to a character’s identity or sexuality, and it doesn’t deal in crude jokes designed to go over kids’ heads. Characters aren’t always labeled as nonbinary, queer or trans on the show. They simply are who they are – and that was intentional, said Sugar, who uses both “she” and “they” pronouns.

Sugar and many of their close loved ones have “fluid gender and sexual identities,” they said. They badly wanted explicitly queer characters in cartoons – something that may have benefited them when they were younger, when they felt alienated by gendered children’s entertainment.

“I just wanted something for us, by us and about us,” they said.

Animated series have a bit more freedom to tell stories about gender identity and gender expression because their worlds are typically more fantastical than our own. There are fewer rules – why, of course a magical rat can transform a Muppet into a princess – and characters’ appearances aren’t dictated by reality.

On “Steven Universe,” Sugar aimed to “scramble all the gender tropes,” from plot points to color choices. The abstractness of animation leaves viewers room to “project ourselves into the character,” said Sugar.

“Their humanity is our humanity!” they said. “To love a cartoon character is, in a sense, to love the part of yourself you see in that character.”

Children see themselves in these TV series

It benefits both gender-diverse and nonbinary and cisgender young people to see positive stories of gender diversity, said Laura Edwards-Leeper, a child clinical psychologist who works with gender-diverse children and teens.

“Children learn a great deal from what they see represented in the media and they look for characters with whom they can identify,” she said.

Once kids have identified a character on TV they relate to, they “internalize aspects of how that character is perceived and treated by others,” Edwards-Leeper said. And if that treatment is positive, that positivity can rub off on the young viewer, improving their self-confidence and validating their own unique way of expressing their gender.

But perhaps the most important impact occurs not within young audiences, but within their parents, she said.

Away from school pressures, children who defy gender norms blossom at home

“These representations can help teach cisgender parents and other adults that rejecting the gender binary and being more accepting of gender diversity in children is more important for their psychological health and quality of life,” Edwards-Leeper said.

Giving children an example of what a gender-diverse character looks like – especially when that character is accepted and loved – can provide them the language with which to express themselves more fully, Edwards-Leeper said.

“Many gender-diverse youth talk about having never known about gender-diverse identities or having the language to describe how they felt until seeing it represented in the media,” she said.

Even Sugar said that creating “Steven Universe” helped them understand themselves better – and introduced them to a community within which to belong.

“I realized that I was saying things with the cartoon about my sexuality and gender that I hadn’t actually admitted to my friends or family or even myself,” they said.

Nonbinary characters are a bigger part of children’s TV

The last 10 years have seen a marked improvement in representation of queer and nonbinary characters on kids’ television – Insider recorded at least 259 LGBTQ characters in children’s shows, 38 of whom were nonbinary (a sizable chunk of that came from “Steven Universe”).

But representation on its own doesn’t necessarily move the needle when it comes to wider societal acceptance, said Toman who has studied the impact of negative portrayals of LGBTQ characters in children’s media. In one 2014 study on children’s books, Toman found that most of the LGBTQ characters in those books were White boys, and most of their stories focused on the harassment they faced.

“I think for a long time visibility and the presence of an LGBTQ character felt like such a huge step in the right direction, but it is no longer enough,” Toman said. “We need to reflect on our cultural shifts and create platforms for all different kinds of people.”

Gonzo's longtime friends accept them when they reveal that they were dressed as a princess at the Muppet Babies' ball.
Disney Junior/Youtube

Sugar didn’t include nonbinary characters in their series for the sake of making history or filling up a database or Wikipedia entry. They wanted to reflect the world as they experienced it – and make any kid feel welcome in “Steven Universe,” whether or not they identified as nonbinary or gender-diverse themselves. It’s a message with particular resonance this year, when at least 33 states have introduced bills that would target minors who are transgender.

“I wondered what it might mean to ask for that empathy and interest from a generation of kids, and if it might be a very small part of creating a safer world,” Sugar said.

Good stories move the people who engage with them and etch out a place for them within the story. When viewers see themselves in a character or in a storyline, they might get to know themselves a bit better, too – even if those stories star effervescent gems and zany toddler Muppets.