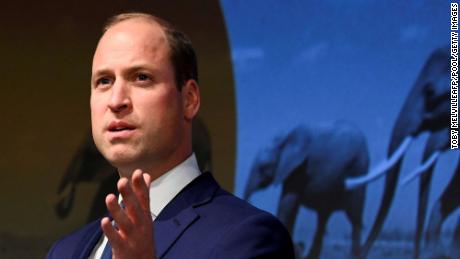 Prince William, the Duke of Cambridge, delivers a speech during The Tusk Conservation Awards ceremony in London on November 22, 2021.

Prince William's overpopulation remarks will do women no favors

Opinion by Eliza Anyangwe, Editor of CNN As Equals

(CNN)When it comes to overpopulation as the cause of wildlife loss in Africa, Prince William just won't let it go.

As I was looking for reactions to the speech the second in line to the British throne gave at an awards ceremony on Monday where he said: "The increasing pressure on Africa's wildlife and wild spaces, as a result of human population, presents a huge challenge for conservationists," I stumbled upon near-identical remarks he made four years prior.
"In my lifetime we have seen global wildlife populations decline by over half," the Prince is reported as having said in 2017 at a gala for the same charity, The Tusk Trust. "Africa's rapidly growing human population is predicted to more than double by 2050 -- a staggering increase of three and a half million people per month. There is no question that this increase puts wildlife and habitat under enormous pressure."
Then, as now, people have been quick to point out two things: the first is the Duke of Cambridge's hypocrisy. Here is a man who's determined his own family size, travels frequently by air and lives a lavish lifestyle (read: has a high carbon footprint) in one of the world's top 15 energy-consuming countries. (Mind you, energy consumption is a limited measure of the UK's environmental impact as Britain largely imports its goods. Someone else -- China -- is accounting for the energy used to produce those goods.)
The second challenge to the Prince's statements centers on the inaccurate conclusions drawn about Africa's rising population. While Africa's population is indeed growing, it remains more sparsely populated than Europe or Asia; indigenous communities that live closest to wildlife are typically excellent custodians of the environment as their survival depends on it; and again, it is human behaviors not human numbers that more directly harm the biosphere.
Prince William speaks at a gala night for the conservation charity Tusk at The Roundhouse on November 2, 2017, in London, United Kingdom.
Read More
But there is more that is wrong with what Prince William said: identifying population growth as the problem, logically presents population control as the solution. This automatically transforms wombs into legitimate sites for climate policy. In other words, women's rights to contraception and education are weaponized: they are no longer tools that help women access greater choice, but instead this gender equality goal is hijacked to impose someone else's agenda.
Let's imagine for one minute that we accept that population growth -- and specifically, population growth in Africa -- leads to greater pressure on wildlife, an argument that Prince William believes is undeniable. How should this be addressed? A one-child policy as a condition for development aid? How will the impact of that reduction in population be measured? Who is to say if it is going far enough to mitigate environmental damage? If it isn't, what then?
Prince William seems to have avoided speculating on how to fix his problem. His grandfather, the Duke of Edinburgh, was not so wise and was known to have called for "voluntary family limitation" to address a growing human population.
This is not the first time, nor will it be the last, that women's bodies are implicated in policy games. In 2017 Denmark, which regularly tops best-country-to-be-a-woman rankings, pledged additional funds to help women access family planning because "<a href="https://www.bbc.co.uk/news/world-europe-405882