Asian Americans are feeling on edge. How you can get help or help those in need

Between a resurgence in anti-Asian violence and the anniversary of the Atlanta spa shootings, it’s an especially fraught time for Asian American and Pacific Islander (AAPI) mental health.

Stop AAPI Hate, a center that tracks reports of racism and discrimination, recorded more than 10,000 incidents against AAPIs nationwide from March 2020 to December 2021.

Licensed clinician Jeanie Chang, a marriage and family therapist based in North Carolina who specializes in AAPI mental health, says she’s seeing women in particular feeling more on edge than ever.

In this conversation with Impact Your World, Chang breaks down the trauma individuals are experiencing, offers clinically backed coping techniques she uses in her own practice, and suggests practical ways allies and workplaces can offer meaningful support.

The following conversation has been edited for length and clarity.

CNN: In a general sense, what are your Asian American clients telling you about how they’re feeling right now?

Jeanie Chang, LMFT: I sense a little bit of a heaviness, feeling like no progress has been made. They feel like things are still as racially charged. We’re still seeing a spike in anti-Asian violence. The safety issue has been a thing, psychological safety and physical safety.

I see quite a bit of Asian DEI (diversity, equity, inclusion) leaders and there’s discouragement as well. They feel like they got the attention right after Atlanta, and of course May (Asian/Pacific American Heritage Month). And it’s a little bit hurtful or disappointing when the talk stops, right?

And now the one-year anniversary is here. It is a huge deal, and yet a few folks have said they’re not going to really commemorate it. API (Asian/Pacific Islander) professionals are actually in distress because of the lack of attention or feeling ignored, neglected, invalidated.

Q. How do these big dates or anniversaries affect collective trauma?

The definition of trauma is anything distressful. People think it’s this dramatic thing like you have to witness a national disaster. No, it could be what’s distressing to you.

Secondary trauma is a little bit more immediate. We can get traumatized as if we are literally there witnessing it or it happening to us just by viewing graphic material. There’s also vicarious trauma – I’m seeing that quite a bit at this time – where that’s long-term trauma. There’s also racial trauma, being exposed to racist attacks, innuendos, expressions, and that also has been a big part of the pandemic.

Overall, that means people are much more sensitive, ultra-, hypervigilant. We all experience it differently, because we’re all different people. It’s part of our experience.

Perhaps the Atlanta anniversary retriggers that horrified feeling that we had as a nation a year ago – and as APIs going, “nobody seems to understand me.” The event can be retriggering, but I’m thinking the space we’re in that has not quite progressed.

Demonstrators attend the 2021 AAPI Rally Against Hate in New York. The Asian American-Pacific Islander community is comprised of more than 50 ethnicities.
Amir Hamja/Bloomberg via Getty Images

The model minority myth is a stereotype started in the civil rights movement (era) by an American White sociologist. The origin of it is harmful because you’re pitting Blacks against Asians, pointing out to Black Americans, “Look, these people are hardworking and they listen and they don’t cause trouble.” So that has carried with us since 1965.

That stereotype is we are model citizens, we don’t rock the boat, we work hard. So the minute people see us, the assumption is, we’re good, we’re fine, we’re well off, we have no problems.

But it can be very distressful. When an Asian American or API needs assistance in schooling, they actually get ignored, because they’re like, “You’re Asian, I think you’re fine.” And that has led to a higher suicide rate.

It also perpetuates mental health stigma: “I shouldn’t get help because I’m supposed to look good,” the saving face mentality that also exists in our culture. So we’re kind of a double whammy of feeling stuck.

As we know, we are very different people. Stereotypes are harmful and false. The bottom line is our identity is multilayered, like anyone’s identity.

Q. What kinds of coping strategies do you recommend to your clients?

I think it’s really important to practice mindfulness, which is also rooted in East Asian culture. It’s so powerful, the practice of trying to ground yourself in the present moment.

Science shows your brain is depleted of oxygen when you’re in distress. So deep breathing is the first thing I teach, something like square breathing or box breathing, which is big in the military. When you inhale, you inhale slowly. Your chest should be puffed out when you inhale for four counts. Then you hold your breath for four counts, four seconds, and then you exhale it all out for four counts. So that one round is 12 (seconds). And you do it four times, like a square. You have time to practice breathing for 48 seconds.

It can change your brain. You can rewire it. And so when we get a little technical with neuroplasticity, the wires in our brain, super important to know that there’s hope despite the trauma you’ve been through, that you can definitely manage it through the practice of mindfulness. 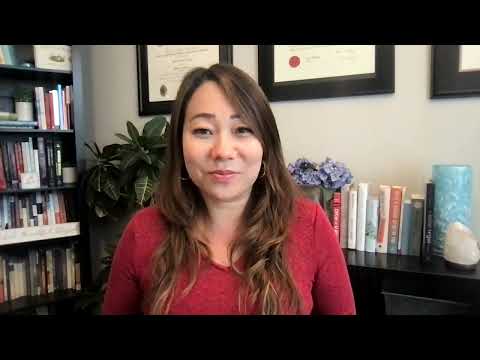 Another coping skill is the butterfly hug. This is based on eye movement desensitization and reprocessing (EMDR) therapy. Anybody could do it. You’re hugging yourself like a butterfly, but you’re tapping with bilateral stimulation to ground yourself. It’s a self-soothing technique for any stressful incident that you may have experienced to bring you back to the present moment.

Not everybody does this, but I like to add affirmations. And especially as Asians, we’re not good at affirming – if anything, we bring ourselves down a lot by saying we’re not good enough. Say in your head as you’re breathing things like, “I am strong. I’m good enough. I’m smart.” Say whatever affirmations come to your mind, starting with “I” because it’s about you. 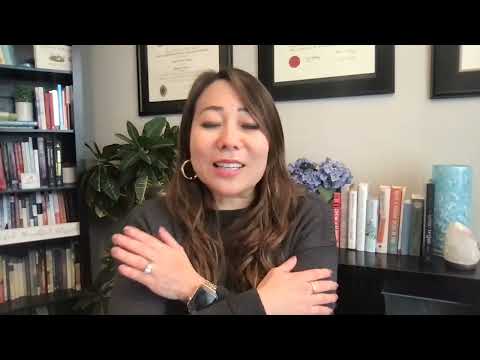 Q. What can allies do on an individual level? And what should they be mindful of in their approach?

I know you care. I know you want to ask your API peers. Go ahead. And you can even preface it by saying, “I’m not sure this is the right way to ask.” Just be honest, but ask. Because overall, when you don’t ask, it does come across as you don’t care. It’s just simply as “how are you feeling about what happened?”

You don’t need to offer solutions. I’m revealing a therapy secret: validation is probably the number-one thing people come in for, to have their stories heard. So when you do that as an ally or friend or peer, my goodness, they will feel really connected. But if you feel like you have something to offer, you could say, ‘“I’d love to help.” That’s different.

They can also choose to educate themselves a little bit, reading an article or brushing up on how to pronounce the Atlanta victims’ names. You bet that Asians will notice, and then there’s an affinity.

So it doesn’t take rocket science. That’s why I think people don’t do it, they think it’s much harder than it is. I just want you to have conversations. But I do want you to make some effort.

Allies also know, culturally speaking, it’s not easy for us to share. We’re not used to being asked. But the more you do it, more you practice it, the easier it gets.

Demonstrators wearing face masks and holding signs take part in a rally to raise awareness of anti-Asian violence, near Chinatown in Los Angeles, California, on February 20, 2021. - The rally was organized in response to last month's fatal assault of Vicha Ratanapakdee, an 84-year-old immigrant from Thailand, in San Francisco. (Photo by RINGO CHIU / AFP) (Photo by RINGO CHIU/AFP via Getty Images)
Ringo Chiu/AFP/Getty Images

Attacks against Asian Americans are on the rise. Here's what you can do

Number one starts with leadership. They’re the changemakers. So what I say to leaders is because you have that position of power and visibility, you need to model that behavior. Do your research or take DEI courses.

You need to be the one starting those conversations. I’m not saying you have to wear your heart on your sleeve, but leaders set the tone and psychological safety in the workplace. I hope employees can share with you things like, ‘“I’m running a little late because I’m nervous about taking the subway, so I walked.” You need to understand the context of what’s going on in this country.

The other thing is if you so want your ERG (employee resource group) executive sponsors that are not API to understand your experience, welcome them to the table. They’re not going to know your experience if you don’t invite them to your listening sessions or heritage month events. Make a concerted effort to point out, “we would love you there.”

Q. How can we sustain these conversations long after events fade from the headlines and without retraumatizing ourselves in the process?

It does not come easy for us to speak up. It’s just not the norm. So we need to unlearn some things, habits like keeping your head down. And that’s why it’s also a little bit more draining for us. Give yourself time to address the things you need to address.

Pick your battles. There may never be an end, so it’s a constant training, like an Ironman: You’re using all your muscles to fight against anti-Asian hate, systemic racism. We’re also learning as we go along. I have found myself pivoting a lot. Life is full of change, so that is also being aware that we need to tolerate change when it comes to things we can’t predict or control.

Speak with other APIs to fuel you. It’s always very heartwarming when you feel connected with people who understand your experiences. You need to get that energy back for you to bring it into spaces where your energy is being sucked out because of toxicity or misunderstandings. You recharge your phone every night. Same thing – we’ve got to recharge.

For more ways to help the AAPI community, CNN’s Impact Your World has gathered a list of resources here.