Watching an ad in which former President Donald Trump promoted Covid-19 vaccines was linked to increased vaccinations in US counties with low immunization rates, according to a new study. The study was released Monday as a working paper in the National Bureau of Economic Research that has not yet been peer-reviewed.

Researchers created a 27-second ad designed to serve as a public service announcement from Trump encouraging people to get vaccinated. Through a randomized control trial, the ad was featured on different YouTube channels across more than 1,000 counties with populations of less than 1 million and in which more than half of the population was still unvaccinated.

When compared to counties that did not receive the ads, those that did receive the ads had more than 100 additional vaccinations on average. In total, treatment counties received an estimated 104,036 more vaccines than control counties. The analysis also found that for every 1,000 more ads presented, there were nearly nine additional vaccinations, on average, per county. 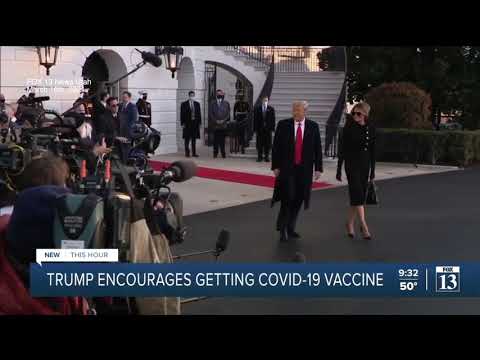 However, the ad’s effect waned with increasing strength of Trump’s base. Researchers found that in counties where more than than 70% of voters supported Trump, the ads did not change vaccine uptake.

Studies have shown that Covid-19 vaccination rates often differ across party lines. A Kaiser Family Foundation poll found that in October 2021, when the ad campaign took place, 90% of Democrats reported being vaccinated compared to 61% of Republicans.

Marc Hetherington, an author of the study and professor of political science at the University of North Carolina, Chapel Hill, was conducting surveys to assess people’s attitudes towards the pandemic when it first hit the US in 2020.

“What we started to realize at that point is this is turning into a highly politicized pandemic of all things,” he said. “Public health people are probably not used to coming up with solutions to health problems that are politicized.”

Overall, the researchers spent $100,000 in ads that reached 6 million viewers, costing about $1 per additional vaccine received. The ad campaign ran from October 14, 2021 to October 31, 2021, after Trump was no longer in office. The ad was featured on a diverse array of YouTube channels, including NBC News, Fox News and Saturday Night Live.

“We found in our survey work that unvaccinated Republicans … had more confidence in Donald Trump than even their own family doctor when it came to providing advice about vaccines,” Hetherington said.

The ad opens with a segment from a Fox 13 News Utah anchor who says, “Donald Trump is urging all Americans to get the Covid-19 vaccine.”

The ad also linked to a full interview between Trump and Fox News anchor Maria Bartiromo from March 16, 2021 – a clip of which was featured in the ad.

Hetherington said he hopes the results of this study can be used to influence public health campaigns, especially as more health issues become politicized. Paralleling coronavirus vaccine trends, flu vaccine uptake has recently become partisan – a change that was not observed prior to the pandemic.

“This politicization of the Covid vaccine is leaking over into people’s attitudes about vaccines more generally,” Hetherington said. “For public health professionals, they’re going to probably need to take politics into account, not just about the Covid vaccine, but about other vaccines in the future.”