Solar Orbiter reveals a never-before-seen look at our sun

Sign up for CNN’s Wonder Theory science newsletter. Explore the universe with news on fascinating discoveries, scientific advancements and more.

The Solar Orbiter mission’s first close pass of the sun in March has revealed our star in a new light.

The spacecraft, which flew by the sun on March 26, has returned a treasure trove of new images and insights after coming within one-third the distance from the sun to the Earth. Solar Orbiter’s heat shield reached about 932 degrees Fahrenheit (500 degrees Celsius), but functioned as expected and protected the spacecraft during its historic first flyby.

Solar Orbiter comes equipped with a multilayer heat shield, a special coating called “Solar Black” made using burnt bone and sliding doors that protect its instruments. The spacecraft also has solar arrays that can tilt away from the worst of the heat and cooling elements in its interior. Together, these keep the spacecraft from melting as it studies the sun.

The mission, a joint effort between NASA and the European Space Agency, captured views of powerful flares and coronal mass ejections and perspectives of the unexplored solar poles. The orbiter even spied a new feature nicknamed the “hedgehog.”

Scientists are just beginning to analyze the full data set captured by the orbiter’s 10 science instruments, but the insights will deepen our understanding of the sun’s behavior and how it affects space weather, which impacts Earth.

The sun is getting more active, and Solar Orbiter has been watching its temper tantrums as the sun heads toward solar maximum.

It’s important to understand the solar cycle because space weather caused by the sun – eruptions like solar flares and coronal mass ejection events – can impact the power grid, satellites, GPS, airlines, rockets and astronauts in space.

Every 11 years, the sun completes a solar cycle of calm and stormy activity and begins a new one. The current solar cycle, Solar Cycle 25, officially began in December 2019, and the next solar maximum, when the sun is experiencing peak activity, is predicted to occur in July 2025.

Over the course of a solar cycle, the sun transitions from a calm period to one that is very intense and active. This activity is tracked by counting sunspots and how many are visible over time. Sunspots, or dark spots on the sun, are the origin point for the explosive flares and ejection events that release light, solar material and energy into space.

This puts Solar Orbiter, and another mission called Parker Solar Probe, in perfect position to watch as we head toward solar maximum.

The feature in the bottom third of the image has been nicknamed the solar hedgehog, imaged on March 30.
European Space Agency

As Solar Orbiter takes detailed new images of the sun, scientists are trying to determine what they are seeing, comparing them with past solar observations from previous missions to determine if these are known features or unknown phenomena. One of these unexpected finds has been dubbed “the hedgehog,” a feature that stretches for 15,534 miles (25,000 kilometers) on the sun and has spikes of hot and cold gas.

Currently, there is no explanation of what it is or how it formed in the sun’s atmosphere.

Solar Orbiter also captured a movie of an active area on the sun where the magnetic field releases loops that rise int the atmosphere. Gas moves around the loops, cools and creates “coronal rain” on the sun’s surface. The science team also saw “coronal moss,” where bright gas creates lacy patterns on the sun. 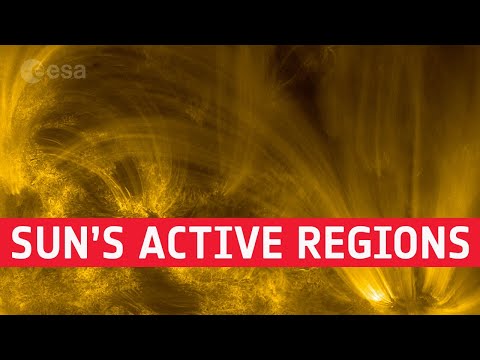 “The images are really breathtaking,” said David Berghmans, principal investigator of the Extreme Ultraviolet Imager instrument at the Royal Observatory of Belgium, in a statement. “Even if Solar Orbiter stopped taking data tomorrow, I would be busy for years trying to figure all this stuff out.”

The Solar Orbiter mission is designed to study the sun’s outer atmosphere, called the corona, and determine how the sun interacts with the heliosphere, a bubble full of charged particles released by the sun that extends beyond the planets in our solar system. Space weather is created when the sun releases its stream of charged particles, called the solar wind, as well as activity by the solar magnetic fields.

The sun's south pole was observed by the orbiter on March 30 in its highest-resolution look yet at this mysterious region.
European Space Agency

The spacecraft’s instruments record data from the solar wind and magnetic fields and try to trace them to their origins through the complex, magnetic environment and back to the sun. Each instrument is responsible for observing and recording different aspects of the sun. Combining these insights could one day be used to help scientists forecast space weather from Earth.

In the lead-up to the close flyby, Solar Orbiter was essentially upstream of Earth and observed solar wind and coronal mass ejections that may head for Earth. Sending data back in real time at the speed of light alerted stargazers to look out for auroras on Earth.

But monitoring space weather in this way could also help us to better protect our technology infrastructure and even astronauts on the International Space Station. A future ESA mission, Vigil, will eventually be placed at a point to one side of the sun and observe coronal mass ejections heading for Earth.

The Solar Orbiter spacecraft, operated by NASA and the European Space Agency captured a giant solar eruption on 15 February, 2022. This is the largest solar prominence eruption ever observed in a single image together with the full solar disc.
Solar Orbiter/EUI Team/ESA & NASA

Solar Orbiter is now getting into position for a third flyby of Venus in September and its next close pass of the sun in October.

More flybys will bring the spacecraft closer and closer to the star in the coming years. Gradually, the spacecraft will raise its orientation to study the sun’s polar regions more directly than ever before.

This never-before-seen view of the poles could help scientists understand the sun’s complex polar magnetic environment, which could reveal the true heart of the solar cycle.