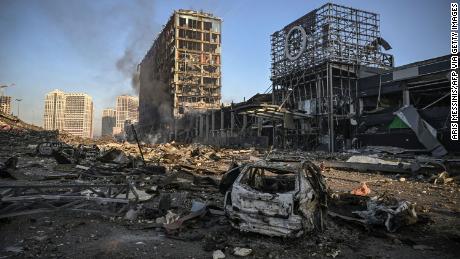 TOPSHOT - Smoke billows after a Russian attack on the Retroville shopping mall abd residential district of Kyiv on March 21, 2022. - At least six people were killed in the overnight bombing of a shopping centre in the Ukrainian capital Kyiv, an AFP journalist said, with rescuers combing the wreckage for other victims. (Photo by ARIS MESSINIS / AFP) (Photo by ARIS MESSINIS/AFP via Getty Images)

Why our fight in Ukraine is yours too

Daryna Shevchenko is chief executive officer of The Kyiv Independent, an English-language news site in Ukraine. The views expressed in this commentary are her own. Read more opinion on CNN.

Kyiv (CNN)I couldn't stop crying as my 75-year-old father helped load my backpack and food for my dog into a friend's car that was parked outside my parents' apartment building.

This was mid-March. From the first day of Russia's invasion of Ukraine, I had moved to stay with my parents in the northern part of Kyiv. Now, I was leaving them behind, relocating to Ternopil Oblast in the west in search of safety.
We had spent a little over a week together, explosions going off non-stop around us, mostly far away, but still scary. There was also fighting in the yards nearby.
With all this happening outside my window, I could barely concentrate on my work. But my parents didn't want to go. Leaving their home scared them more than staying in a city under attack.
It was the thought that we might never be able to come back that was the most devastating — to all of us. But I couldn't stay.
Read More
Just a few months before the war, I took on the job of managing a media start-up, The Kyiv Independent, a new English-language news publication that has now become the voice of Ukraine's resistance, as described by Le Monde.
<a href="/202