Depths of the disaster

The Gulf Coast oil disaster is made up of many facets: the lives, the numbers, the science, the economy, the wildlife and more. The worst U.S. spill began April 20, and the consequences could last decades. Explore some of the threads of this unfolding story.

HERE'S HOW MUCH OIL
HAS FLOWED INTO
THE GULF OF MEXICO:
154 days after the disaster began, officials declared the leak sealed September 19.
4,900,000
How does this compare to US daily oil production?
Find out now
avg. barrels per day:
measured in:
Based on Aug. 2 government estimate of 4.9 million barrels with +/-10% uncertainty
$22.7 billion:
Potential loss to Gulf Coast travel economy over three years
Read more
Wildlife: How many birds, turtles and mammals died?
See the numbers 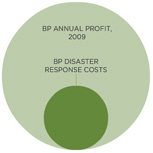 The cost to BP of responding to the Gulf oil disaster is a fraction of the company's annual profits.
Get the numbers
Want to know more about BP's attempts to stop the leak? Watch our video timeline

Policy and politics of oil in America
BP hands over claims process »
Obama: 'Job is not finished' »
Drilling ban unlikely to be extended »

CONTINUE THE CONVERSATION ON TWITTER
The explosion of the Deepwater Horizon was not without warning.
read the story »