Facebook has removed a post by Ethiopian Prime Minister Abiy Ahmed for inciting violence, after he called on citizens to take up arms and fight armed rebels advancing on the capital Addis Ababa.

"Our people should march ... with any weapon and resources they have to defend, repulse and bury the terrorist TPLF," Abiy said in a Facebook post Sunday, referring to Tigray's former ruling party, the Tigray People's Liberation Front.

An armed group fighting under the banner of the TPLF, known as the Tigray Defense Force (TDF), has joined forces with the Oromo Liberation Army (OLA) in their push to the capital.

A spokesperson from the newly coined Meta Company said in a statement that it was notified of Abiy's post for violating Facebook politics on inciting violence.

“As the ongoing conflict in Ethiopia intensifies, we are committed to helping keep people safe and preventing online and offline harm through our platforms," the spokesperson said in a statement.

"We were made aware of a post by Ethiopia’s Prime Minister and removed this for violating our policies against inciting and supporting violence. At Meta, we remove content from individuals or organizations that violates our Community Standards, no matter who they are."

The removal comes after criticisms that Facebook hasn't done enough to police hate speech and inflammatory content on its platform in Ethiopia.

The social media giant ranks Ethiopia in its highest priority tier for countries at risk of conflict, but internal documents obtained by CNN last month revealed that Facebook's moderation efforts were no match for the flood of inflammatory content on its platform.

The documents are among dozens of disclosures made to the US Securities and Exchange Commission (SEC) and provided to Congress in redacted form by Facebook whistleblower Frances Haugen's legal counsel. A consortium of 17 US news organizations, including CNN, has reviewed the redacted versions received by Congress. Haugen said one of her core motivations for gathering the internal documents was bringing to light "how badly Facebook is handling places like Ethiopia."

They show employees warning managers about how Facebook was being used by "problematic actors," including states and foreign organizations, to spread hate speech and content inciting violence in Ethiopia, where its user base is large and growing. The documents also indicate that the company has, in many cases, failed to adequately scale up staff or add local language resources to protect people in these places.

A Facebook spokesperson told CNN in October that the company has been "actively focused on Ethiopia," and, over the past two years, has invested in adding more staff with local expertise, including in local languages, to improve its proactive detection of harmful content in the country. The spokesperson also said that the company had improved its reporting tools for people in Ethiopia to make it faster and easier for them to report content they believe violates its community standards. 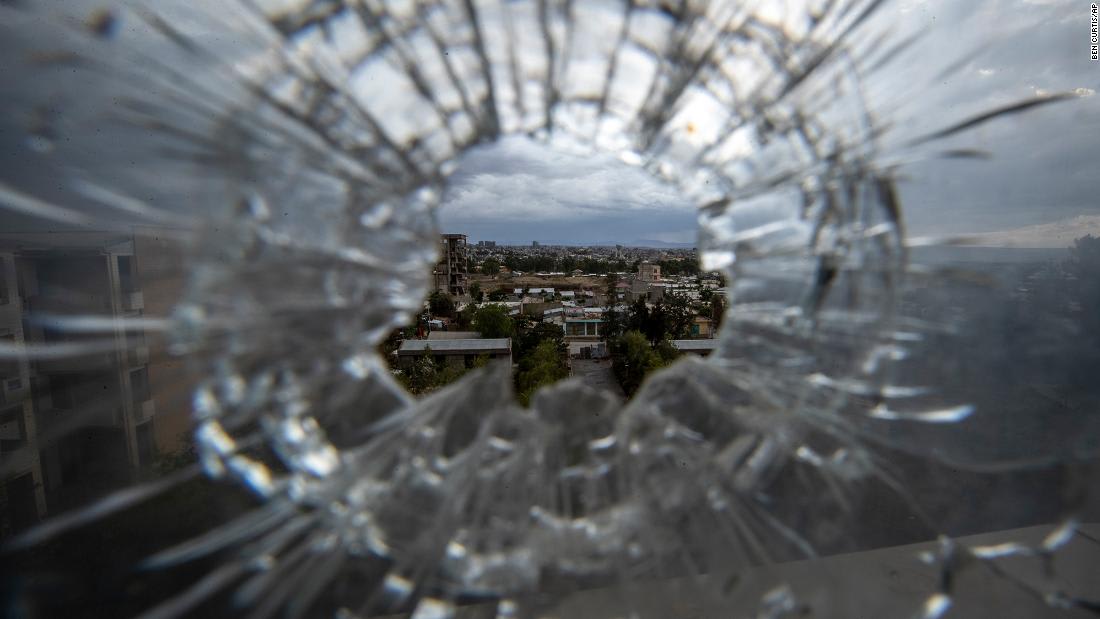 Facebook knew it was being used to incite violence in Ethiopia. It did little to stop the spread, documents show

The highly anticipated report was published almost a year to the day since Ethiopian Prime Minister Abiy Ahmed ordered a military offensive against Tigray's ruling party, the Tigray People's Liberation Front (TPLF). Twelve months on, the fighting has left thousands dead, displaced more than 2 million people from their homes, fueled famine and given rise to a wave of atrocities.

Now, with combined rebel forces edging closer to Addis Ababa, fears are growing that the conflict could spiral into all-out war.

The joint investigation by the UN Human Rights Office and Ethiopia's state-appointed human rights commission (EHRC) released on Wednesday offers the most comprehensive look to date into the conflict's impact on civilians, detailing extra-judicial killings, torture, sexual and gender-based violence, violations against refugees, and forced displacement.

The investigation draws from interviews with 269 victims and witnesses of alleged violations, who detail horrific abuse:

A 26-year-old woman in Adet, who said she was gang-raped by Eritrean soldiers in front of her 3-year-old daughter. A man in Mai Kadra attacked by a Tigrayan youth group with machetes, shot in the back and thrown into a fire. A Tigrayan fighter who said she saw Ethiopian soldiers torture prisoners at a military camp with electric cables, plastic-covered metal rods and wooden sticks.

It is the only human rights probe to have been allowed into the blockaded Tigray region since fighting broke out, and may be the best shot that the international community has at establishing the facts on the ground.

Yet the UN and EHRC stopped short of calling the conflict in Tigray a genocide or laying blame for human rights violations at the feet of one group, saying that all parties to the conflict had "committed violations of international human rights" which "may amount to war crimes."

The joint investigation is a rare partnership that has raised eyebrows among Tigrayans, human rights groups and other observers, who have flagged concerns about its independence from government influence. But the UN on Wednesday reaffirmed its impartiality.

"Of course, it is impartial ... the report stands for itself," UN human rights chief Michelle Bachelet said during the Geneva news conference, adding: "We did not come under pressure from the government."

But she acknowledged that investigators were hampered by restricted access to some sites in Tigray, where eyewitnesses and rights groups say some of the worst atrocities of the conflict have been perpetrated.

Bachelet also confirmed that a UN human rights officer who worked on the report was among seven UN officials declared "persona non grata" and expelled from Ethiopia last month on accusations of "meddling in domestic issues" -- a claim that she rejected.

Authorities announced a nationwide state of emergency on Tuesday and called on citizens to take up arms to defend Addis Ababa, as troops allied against Ethiopia's central government advance on the capital.

Fighters from the Tigray Defense Force (TDF) and the Oromo Liberation Army (OLA) claimed to have seized two key towns in Amhara, on the road to Addis Ababa on Sunday. The OLA is an outlawed armed group from Oromia, the country's most populous region.

The rapid advance of the fighters has raised concerns among Ethiopia's leaders that the capital could fall. Abiy has urged citizens to take up arms and fight the Tigrayan forces.

Addis Ababa's city administration was instructing residents on Wednesday to register their weapons and gather in local neighborhoods to "safeguard" their surroundings, Reuters reported.

It marks a dramatic escalation in the Tigray conflict, which has spilled over into ethnic violence in neighboring regions and has the potential to pull Africa's second-most populous country apart. 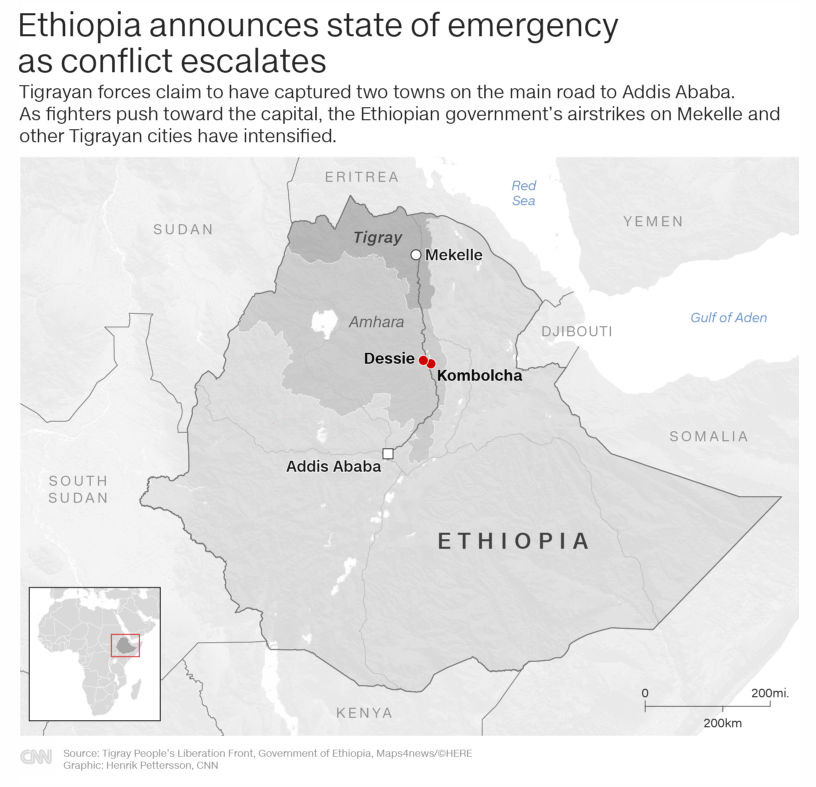