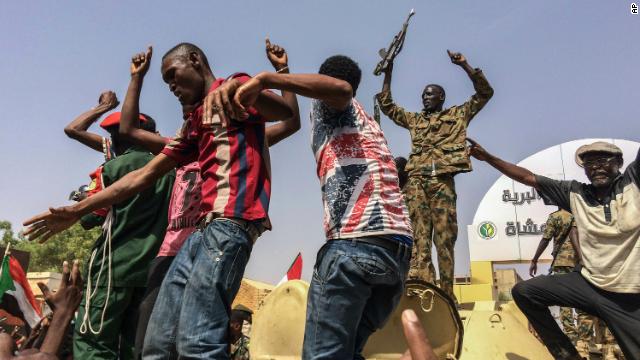 We're concluding our live coverage of the coup in Sudan, which saw former president Omar al-Bashir ousted from power and his government dissolved after months of demonstrations, but stay with CNN as we follow the story.

If you're looking for more, try these links:

But Henry goes on to ask Sudan’s leaders to respect the rights of Sudanese to continue to protest peacefully and enact reforms to "reverse the entrenched patterns of repression and immunity."

Henry also says a curfew set in place by the government is a “test” for how they will deal with the continuing sit-in, and a test for acting leader, Sudan’s Defense Minister Awad Mohamed Ahmed Ibn Auf, who has declared a two-year military council to oversee a transition of power in the wake of the coup.

Henry says of Ibn Auf, “He doesn’t have a good record at all” and the “US has sanctioned him for his role in Darfur atrocities." For that reason, she adds, “protestors watching are right to be skeptical."

Henry also calls on Sudanese authorities to execute the 2009 International Criminal Court arrest warrant against Omar al-Bashir for crimes against humanity and war crimes. Bashir stands accused of conducting a campaign of ethnic cleansing in the country's Darfur region.

State Department spokesperson Robert Palladino said on Thursday that “the Sudanese people should determine who leads them and their future,” and that they “should be allowed to do so sooner than two years from now.”

Palladino said the US is “monitoring” the situation and that the “big focus for the United States right now is the safety and welfare of our embassy team on the ground as well as private citizens, American citizens in Sudan.”

After three decades of rule, Sudanese President Omar al-Bashir has been arrested and forced from power in a military coup.

Bashir's government has been dissolved, and a military council has assumed control for two years to oversee a transition of power, Sudanese Defense Minister Awad Mohamed Ahmed Ibn Auf said in a televised statement Thursday.

Egypt’s Foreign Ministry has issued a statement in support of developments in Sudan, emphasizing it stands by "all choices made by the brotherly people of Sudan and their desire to freely shape the future of their country at this crucial stage."

Egypt will continue to “respect the complete sovereignty of Sudan and its national decision," the statement goes on to say.

Egypt also says it has "full confidence" in the ability of the people of Sudan and “their loyal national army in overcoming this critical state”.  Egypt also calls on the international community to support the decision made "by the people of Sudan" and to assist Sudan in its efforts for a "peaceful transition towards a better future," adds the statement issued Thursday.

Egypt of course shares a border and much history with its neighbor to the south.

The United Nations has released $26.5 million from its emergency relief fund to provide "food, livelihood, nutrition, health, water and sanitation assistance" to over 800,000 people "affected by a worsening economic crisis and food insecurity" across Sudan over the next six months.

"The economic crisis has had knock-on effects on the wider humanitarian situation that go beyond food insecurity. Higher food prices mean that families are eating less nutritious food and more young children and pregnant women are getting sick. Families struggle to afford even limited medical treatment. With jobs lost, they are also being forced to pull their children out of schools."

Sudan's anti-government demonstrations, which have led to the fall of one of the world's longest-serving dictators, originally began over a rise in the cost of living, fuel shortages and a hike in food prices.

Human Rights Watch has called on Sudanese authorities to execute the 2009 International Criminal Court arrest warrant against Omar al-Bashir for crimes against humanity and war crimes.

Bashir stands accused of conducting a campaign of ethnic cleansing in the country's Darfur region. He was nearly arrested in 2015 while visiting South Africa. He faces five counts of crimes against humanity and two counts of war crimes in connection to Sudanese military actions in Darfur.

Jehanne Henry, associate Africa director at Human Rights Watch, said that the release of political prisoners following the coup announcement was a necessary start, but that Sudan's leaders must do more to respect human rights.

"This significant development reinforces the authorities’ obligation to address egregious human rights abuses suffered by so many Sudanese over the last three decades. Al-Bashir’s ouster is a testament to the tenacity of the protesters, who remained in the streets despite the government’s violent repression
The release of detainees in Khartoum is a necessary start, but Sudan’s leaders need to ensure that all those wrongfully detained are released and that the rights of the Sudanese people to protest peacefully are fully respected. They should also hand al-Bashir and the others facing ICC international arrest warrants over to the court at once as victims of the gravest crimes in Darfur should not have to wait any longer for justice."

CNN just spoke to two residents of Khartoum, Sudan, about the Sudanese military's announcement of a two-year transitional council.

We did not listen to the whole statement. The one thing we know is that there will be a two-year transitional government. We come here tonight as you can see for the martyrs, who were killed by the regime, and the regime is still here. It was toppled once, and it will be toppled again, and this is the only solution we have. This is all I want to say.

Sudanese activist and filmmaker Hajooj Kuka says he was held for three weeks in a secret detention center known as Al Talaja, or the “Refrigerator," where sub-zero temperatures are allegedly used to torment prisoners.

Speaking to CNN after news of the military coup broke, Kuka said he was excited to hear that Sudan’s National Intelligence and Security Service (NISS), which has waged a brutal crackdown on dissent, had nearly collapsed.

"One thing we’re excited about is the national intelligence service, which was the main service oppressing and killing people, almost collapsed ... It's not as strong an institution as it was," Kuka said.

A CNN investigation released on Monday revealed details of the indiscriminate violence that has become synonymous with Sudan’s security forces, including torture techniques deployed at detention sites like Al Talaja.

Kuka said protesters were still out in force and demonstrations would continue until the military had handed over power to the people.

"The crowds are huge. We’re expecting a good number of people to stay and for the protests to continue for the next few days," Kuka told CNN.

The photographer who captured the now iconic image of a young woman leading anti-government protests in Khartoum told CNN on Thursday that demonstrations would pick up pace following the military coup.

"Protest will continue because we have a lot of needs and we said it clearly to the government. Now because the old government is still at its place -- only Omar Bashir left his chair -- everyone here in the street is protesting even more than this morning," Lana Haroun said.

"The protest will continue until things will change. Nobody knows what will happen, but this is not the way," she added.