Ireland is ready to block a trade deal between the European Union and Mercosur unless Brazil takes action on the Amazon forest, Irish Taoiseach Leo Varadkar said today.

In a statement, Varadkar says the Mercosur deal is two years away and Ireland will monitor Brazil’s environmental actions to determine whether to block the deal.

He added Irish and European farmers could not be told to use fewer pesticides and respect biodiversity when trade deals were being made with countries not subjected to “decent environmental, labour and product standards.”

More context: Wildfires are raging at a record rate in Brazil's Amazon rainforest. Environmental organizations and researchers say the wildfires were set by cattle ranchers and loggers who want to clear and utilize the land, emboldened by the country's president.

Colombian pop star Shakira tweeted that it's time to "speak up and stop the deforestation of the Amazon."

"The home of our people and our fauna should be protected. The Amazon is ours, is everyone’s!" she added.

In a Facebook live video last night, Brazilian President Jair Bolsonaro suggested multiple parties could be behind the forest fires raging in the Amazon, including ranchers, a political bloc often aligned with the far-right president.

Bolsonaro went on to say there are “suspicions” that ranchers are behind the forest fires and appealed to the Brazilian people to “help us” combat the fires.

“The consequences are for everyone. If (ranchers) want to expand productive land, that’s ok,” he said, though immediately added those actions would be counter-productive to the new and likely long-term problems of wildfires.

More context: Environmental organizations and others have previously said the wildfires began with increased land-clearing and logging that was encouraged by the country’s pro-business president. Amnesty International on Thursday said the responsibility for the fires that have been raging for weeks in the Amazon “lies squarely with President Bolsonaro and his government,” adding that his government’s “disastrous policy of opening up the rainforest for destruction [is] what has paved the way for this current crisis.”

Brazilian President Jair Bolsonaro said Thursday his country lacks the resources to combat the raging wildfires in the Amazon.

“The Amazon is bigger than Europe. How are you going to fight criminal fires in this area?” Bolsonaro said.

He also said the Ministry of Justice lacked enough staff to investigate how the fires began.

On Wednesday, Bolsonaro suggested non-governmental organizations may have started the fires. He continued this line of reasoning on Thursday, saying the fires are related to environmentalists’ opposition to his government.

“The NGOs lost money, the money that came from Norway and Germany to here. They’re unemployed. What do they need to do? Try to overthrow me,” he told reporters in Brasilia.

Brazilian President Jair Bolsonaro tweeted Thursday that France's President Emmanuel Macron is attempting to raise the issue of the wildfires in Brazil at the G7 Summit "for personal political gains."

“I regret that President Macron is seeking to instrumentalize an internal issue in Brazil and in other Amazonian countries for personal political gains. The sensationalist tone that he uses to refer to the Amazon (even appealing to fake photos) does not contribute anything toward solving this problem.”

“The Brazilian government continues to be open to dialogue on the basis of objective data and on mutual respect. The suggestion of the French president that Amazonian issues be discussed in the G7 without countries in the region participating is reminiscent of a colonial mindset inappropriate in the 21st century.” 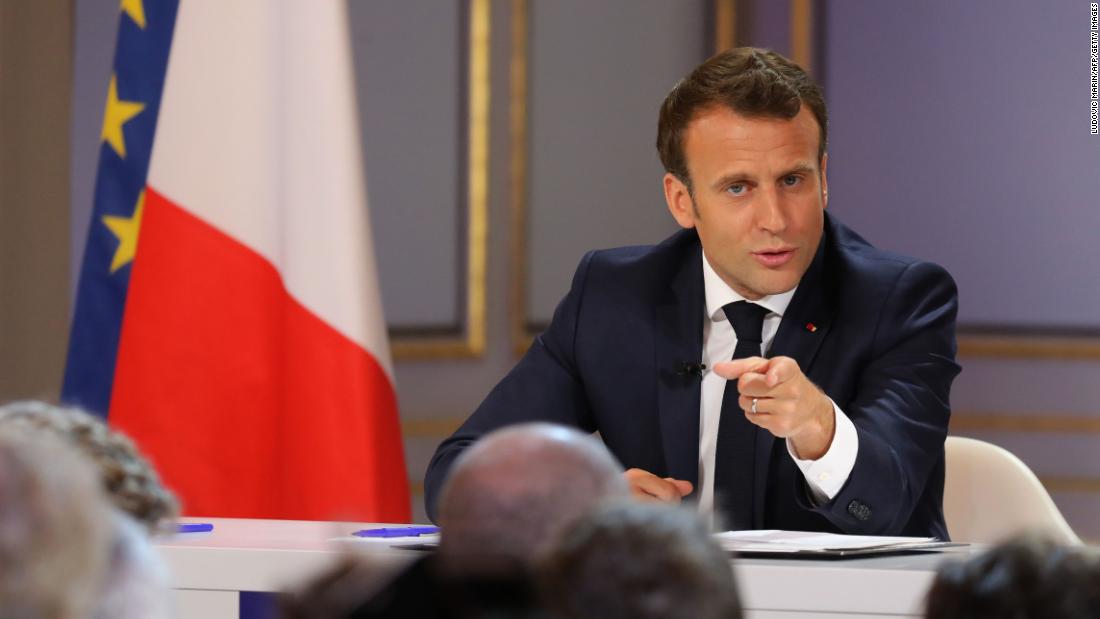 French President Emmanuel Macron joined the international outcry over the wildfires in the Amazon rainforest on Thursday, calling them an “international crisis.”

“Our house is on fire. Literally,” Macron tweeted on Thursday. “The Amazon, the lungs of our planet which produces 20% of our oxygen, is on fire. This is an international crisis.”

Macron tweeted that the members of the G7, who are set to meet on Saturday, will discuss the fires.

The Amazon rainforest, which is currently seeing record-setting wildfires, is an important part of the planet's ability to combat the climate crisis, activists say.

That means damage to the forrest could mean damage globally.

"The Amazon is incredibly important for our future, for our ability to stave off the worst of climate change," Christian Poirier, the program director of non-profit organization Amazon Watch, said.

Poirier continued: "This isn't hyperbole. We're looking at untold destruction — not just of the Amazon but for our entire planet."

The Amazon forest produces about 20% of the world's oxygen, and is often called "the planet's lungs."

According to the World Wildlife Fund, if it is irrevocably damaged, it could start emitting carbon instead — the major driver of climate change.

The European Union's satellite program, Copernicus, released a map showing smoke from the fires spreading all along Brazil to the east Atlantic coast.

The smoke has covered nearly half of the country and is even spilling over into neighboring Peru, Bolivia and Paraguay. 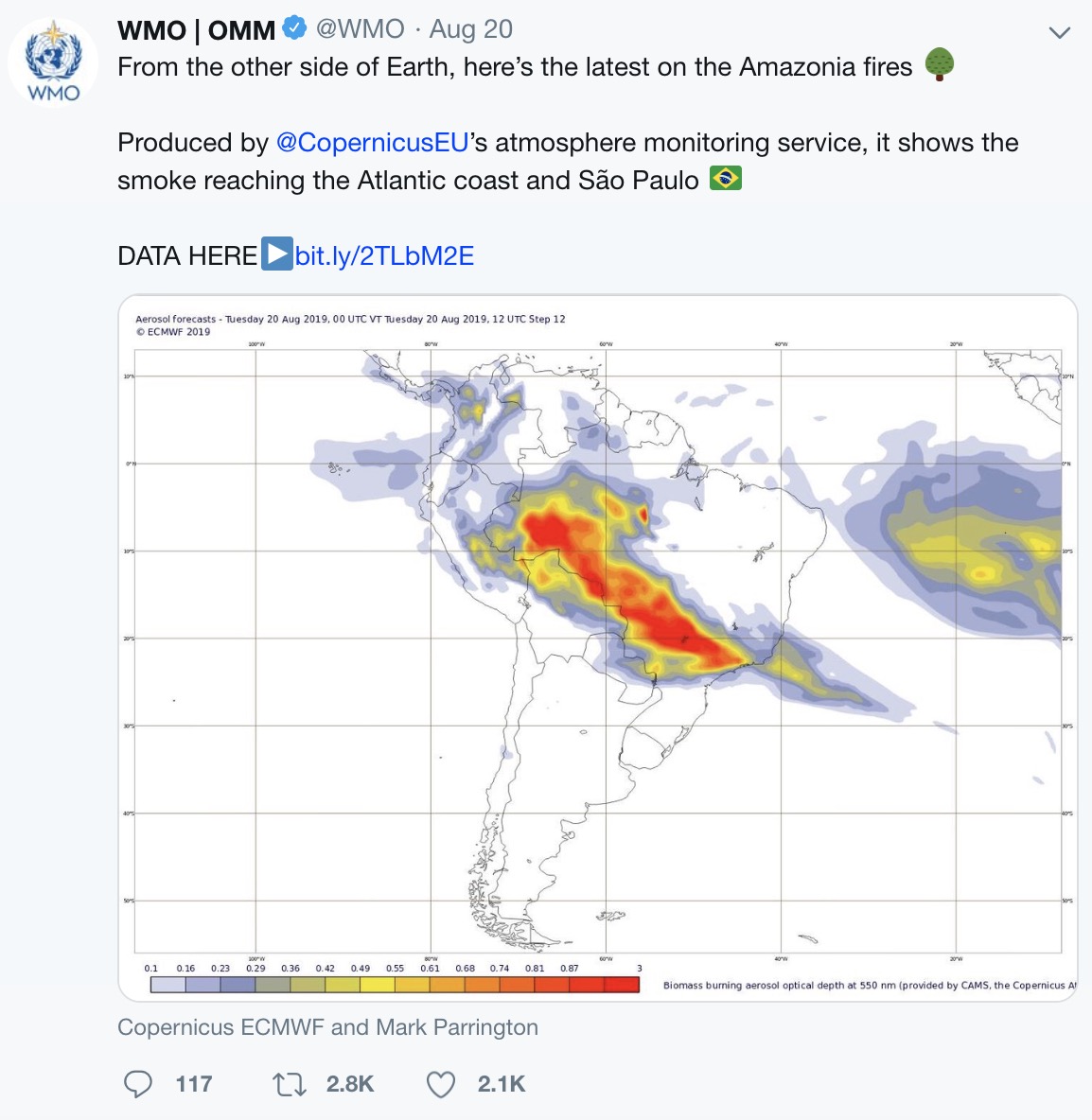 Social media helped increase coverage of the wildfires — but it's also contributing to misinformation.

One of the most-shared photos on social media shows a lush forest with a massive wall of smoke billowing from a fire. Musical artist and actor Jaden Smith and YouTube celebrity Logan Paul both shared it.

The problem: While the image does show the Amazon rainforest in Brazil, it's more than 30 years old: The Guardian, which republished the photo in 2007, says it was taken in June 1989.