Our live coverage of the resignations in Bolivia has ended for the day. Read up on the latest news below.

“We condemn the opposition’s coup strategy which has unleashed violence on Bolivia, has cost deaths, hundreds of injuries and condemnable expressions of racism towards the native people. We support Evo Morales," Bermúdez said via twitter Sunday

The Brazilian Foreign Ministry expressed its “profound concern with the grave irregularities” shown in the OAS report, according to a statement it released.

“Brazil considers it pertinent the call for new general elections as an answer to the legitimate protests from its people and recommendations from the OAS, after the finding of grave irregularities," the statement said.

The Organization of American States (OAS) released a report that detailed a series of alleged irregularities in Bolivia's election, including failures in the chain of custody for ballots, alteration and forgery of electoral material, redirection of data to unauthorized servers and data manipulation which all impacted the official vote count.

The US State Department has released a statement regarding the "quickly unfolding events" in Bolivia.

Read the statement below in its entirety:

“We are monitoring quickly unfolding events in Bolivia and the resignation of President Evo Morales and Vice President García Linera. We refer you to our earlier statement today regarding the importance of democracy in Bolivia and our hemisphere. As we have stated earlier today, we urge the OAS to send a mission to Bolivia to oversee the new electoral process and to ensure that the new Electoral Tribunal is truly independent and reflects a broad swath of Bolivian society. The Bolivian people deserve free and fair elections in the context of their constitution. We call on everyone to refrain from violence during this tense time and we will continue to work with our international partners to ensure that Bolivia’s democracy and constitutional order endure.“

Once former President Evo Morales presents his resignation letter to the congress, and given the vice president has resigned too, the president of the Senate, Adriana Salvatierra Arriaza, would be in charge of the country as per the Bolivian constitution. \

Arriaza is a 30-year-old Bolivian politician. She has been the president of the Senate in Bolivia since 2019.

It is unclear if Salvatierra will accept the position. Segments of the Bolivian opposition have said they do not want anyone from the government party taking over.

Article 169 of the Bolivian Constitution:

II. In case of a temporary absence, the Presidency of the State will assume the position of the Vice-President for a period that may not exceed ninety days.

In the current situation, Article 169, bullet I applies.

Some of the resignations have been confirmed by ABI, Bolivia’s government press agency.

In the same day that the Organization of American States presented the conclusions of an electoral audit citing severe irregularities in the presidential elections held on October 20th, president Morales, speaking on National TV, presented his resignation. Morales says that this decision "hurts deeply" but that it's something he does “for the good of the country”.

"I regret this deeply... it's my obligation as an indigenous president to seek the pacification of the country. It hurts so much to see that these men (in reference to the main opposition leaders) brought violence, aggression between Bolivians," Morales said.

Morales said he will be sending his resignation letter to Congress in the next hours. 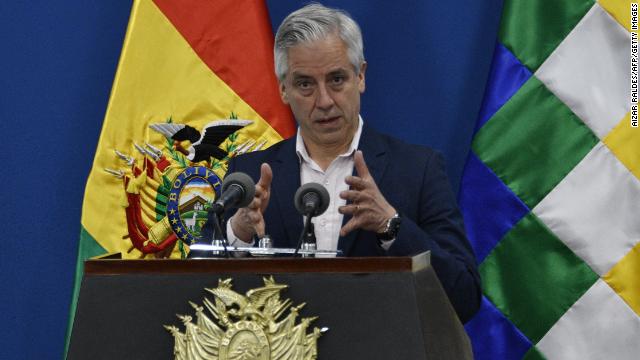 Bolivian President Evo Morales said at a press conference today that he is resigning “for the good of the country."

The news of his resignation comes after Williams Kaliman, Commander of the Bolivian Armed Forces, asked the president to step down as a way to bring peace to the country.

Kaliman's statement comes after the publication Sunday of the results of an electoral audit conducted by the Organization of American States citing several irregularities in the presidential elections held in late October.

Bolivia will hold new general elections after an international audit found last month's election results could not be validated due to "serious irregularities."