Our live coverage of the Quad summit in Tokyo has ended. Read more about it:

The four Quad leaders wrapped up today's summit with a joint statement that vowed their "steadfast commitment to a free and open Indo-Pacific that is inclusive and resilient."

The statement also reflected on how rapidly the loose partnership has developed. After having largely fallen apart in 2008, the Quad was revived in 2017, and the leaders of the four members met for the first time last year.

Veiled warning: The statement highlighted "challenges to the maritime rules-based order, including in the East and South China Seas" — both waters that have long been contested, with overlapping territorial claims by numerous countries.

China claims almost all of the vast South China Sea as its sovereign territory. It has been building up and militarizing its facilities there, turning islands into military bases and airstrips, and allegedly creating a maritime militia that could number hundreds of vessels.

Meanwhile, in the East China Sea, China claims sovereignty over the Japanese-controlled Senkaku Islands, also known as the Diaoyu Islands. In recent years, the US has reiterated its promise to defend the islands in the event of foreign aggression.

The statement did not include any explicit mention of China, but offered a veiled warning: "We strongly oppose any coercive, provocative or unilateral actions that seek to change the status quo and increase tensions in the area, such as the militarization of disputed features, the dangerous use of coast guard vessels and maritime militia, and efforts to disrupt other countries’ offshore resource exploitation activities."

War in Ukraine: The leaders also discussed their responses to the ongoing war and humanitarian crisis in Ukraine, and "reiterated our strong resolve to maintain the peace and stability in the region," the statement said. "We underscored unequivocally that the centerpiece of the international order is international law, including the UN Charter, respect for sovereignty and territorial integrity of all states."

Asia crises: The statement also condemned North Korea's recent surge in missile testing; called for an end to violence in Myanmar, where the military seized control in a coup last year; and pledged to continue cooperating on pandemic response, infrastructure investment, climate action and more.

Though not a formal military alliance, the armed forces of the Quad joined together represent a formidable group.

The United States has Asia-Pacific’s most powerful military, according to the 2021 Asia Power Index from the Lowy Institute, an independent Australian think tank.

The index puts India as the fourth most powerful of 26 nations in its rankings. Japan ranks seventh and Australia eighth.

“For the purpose of this index, power is defined as the capacity of a state to direct or influence the behavior of other states, non-state actors, and the course of international events,” the Lowy Institute says.

The US rates at the top of all those categories except military and paramilitary forces, where India, with more than 3 million troops, ranks No. 1.

Australia’s top ranking is No. 3, for both combat experience and command and control.

Japan’s highest rank is No. 5 for weapons and platforms.

In its key findings, the Lowy report notes, “US partners are enhancing their collective deterrence to support a military balance. Yet Asia’s deepening security dilemma presents a significant risk of war.”

Looking at China's overall influence in the region, which measures economic and diplomatic influence among other factors, the 2021 survey saw a decline in Beijing’s sway.

“China’s comprehensive power has fallen for the first time, with no clear path to undisputed primacy in the Indo-Pacific,” the key findings say.

The Quad has its roots in the response to the devastating 2004 Indian Ocean earthquake and tsunami, when the four countries set up a "regional core group" to help relief efforts. But the partnership in its current form was created in 2007, and held its first meeting in May that year.

In a speech several months after that first meeting, Japan's then-Prime Minister Shinzo Abe described his vision of a "broader Asia ... an immense network spanning the entirety of the Pacific Ocean, incorporating the United States of America and Australia."

The countries shared "fundamental values" such as freedom and democracy, and common strategic interests, he said.

The initiative fell apart in 2008 under intense pressure from China and the threat of economic retaliation, said Cleo Paskal, a non-resident senior fellow for the Indo-Pacific at the Foundation for Defense of Democracies.

But it was revived in 2017 amid renewed concerns about China's rapid rise as a global superpower and Beijing's increasingly aggressive foreign policy.

Since then, the group has grown more active, with the four heads of state holding a symbolic virtual meeting in March 2021 — then meeting in person for the first time in September that year.

US President Joe Biden's crusade against authoritarian leaders abroad is complicated, constantly, by the messiness of his democracy at home.

The leader who so forcefully condemns aggressors and so completely marshals the world community against Russia notoriously failed to marshal the senators he needed to enact a lasting domestic agenda.

He's bent on ensuring that the Ukrainian and Taiwanese people can choose their own leaders in free elections, but a shocking number of Republicans continue to reject his own election victory.

He sputters trying to explain a teetering economy to Americans, which could cost his party control of Congress in elections later this year.

The Senate is so paralyzed by the filibuster, which gives a minority the ability to squash legislation, that no elected leaders seem to be seriously talking about federal legislation to deal with some of the largest American problems:

To name a few. 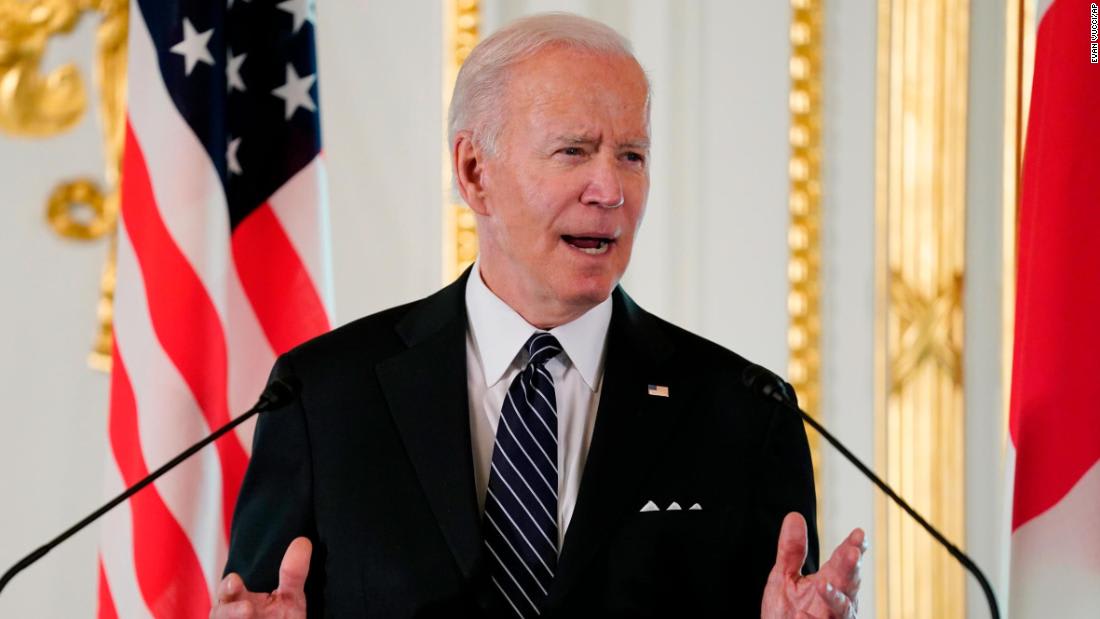 US President Joe Biden's first meeting with his new Australian counterpart focused in part on the war in Ukraine, according to a White House statement.

Biden "commended Australia’s strong support for Ukraine since Russia’s invasion, and the leaders agreed on the importance of continued solidarity, including to ensure that no such event is ever repeated in the Indo-Pacific," the statement said.

They also agreed to "work closely" on the Indo-Pacific Economic Framework — Biden's new economic plan for the region — and to address "the existential threat posed by climate change," the statement added.

This is Albanese's first diplomatic event as Prime Minister, after being sworn in on Monday.

"The leaders committed to continue providing humanitarian assistance, and discussed how to cooperate to manage disruptions caused by the war in Ukraine, in particular the rise in energy and food prices, to protect their respective citizens and the world," the statement said.

Modi has been reluctant to condemn the war in Ukraine. India and Russia have long had friendly relations, with New Delhi reliant on Russian-made arms.

The two leaders also addressed other topics during their meeting, according to the White House, including economic cooperation, action on climate change, and vaccine production in India.

The Quad itself is not a formal military alliance, but alliances and agreements exist among its members.

US and Japan: Foremost among these is the US-Japan Mutual Security Treaty, a document signed in 1951 at the same time as the Treaty of San Francisco, which formally ended World War II.

The Council on Foreign Relations (CFR) calls the US-Japan pact “the cornerstone of U.S. security policy in East Asia for decades.” Article IV of the treaty commits Washington to defend Japanese territory and Japan to defend US forces within its territories.

And those forces are substantial. According to a November report from the CFR, more than 60,000 US active duty military personnel and Department of Defense civilians are permanently stationed in Japan, more than any other foreign country.

US and Australia: Australia also shares a mutual defense treaty with the US: the Australia, New Zealand and United States Security Treaty, or ANZUS Treaty, signed in 1951.

While the US and New Zealand no longer have a security relationship through ANZUS, US-Australia links have remained strong, with Canberra even invoking its defense clause to help Washington respond to the Sept. 11, 2001, terror attacks on the US.

Apart from the US, the other Quad countries have been setting up bilateral security arrangements.

Japan and Australia: In January, Canberra and Tokyo signed a “reciprocal access agreement,” which streamlines procedures for their militaries to access each other’s facilities and enhance joint exercises and training.

That pact built upon a joint security declaration of 2007, under which the two set up joint defense exercises and agreed to cooperate on areas such as maritime and aviation security and counterterrorism among others.

India and Australia similarly agreed on a “comprehensive strategic partnership” in 2020. Part IV of that pact said, “both sides agreed to continue to deepen and broaden defense cooperation by enhancing the scope and complexity of their military exercises and engagement activities to develop new ways to address shared security challenges.”

India and Japan: Also in 2020, India and Japan signed an Agreement on Reciprocal Provision of Supplies and Services, which makes it easier for the two countries’ militaries to share logistics in joint endeavors.

And Washington and New Delhi have been forging stronger ties in recent years. At a meeting of their defense ministers in Washington earlier this year, US Defense Secretary Lloyd Austin announced a new pact to cooperate in space, deepen cooperation in cyberspace and expand “information sharing partnership across all warfighting domains.”

Albanese was elected on Saturday and sworn in as Prime Minister on Monday.

Biden thanked Albanese for arriving at the Quad summit so soon after taking office, and praised the US-Australia relationship as an anchor of prosperity in the Indo-Pacific.

Albanese then spoke, sharing a story about a program he participated in as a young man in his 20s, during which he spent five weeks in the United States.

During the course, he studied the interaction of different groups with the US government — and "I did everything from the National Rifle Association .... to Planned Parenthood," he said. "Across the spectrum."

Biden stood up and pretended to walk off, eliciting laughter from reporters, before smiling and shaking Albanese's hand. "You're a brave man," he said.

Albanese also praised the longstanding US-Australia alliance, which marked its 70th anniversary in 2021. He added that he looked forward to welcoming Biden and the leaders of India and Japan at the next Quad summit, which will be held in Australia in 2023.