Today's National Day parade is something of a second coronation for Chinese President Xi Jinping, said Yang Jianli, a longtime dissident and founder of the US-based Citizen Power Initiatives for China.

"The parade is important for Xi," Yang said. "He is seeking a mandate for (dropping term limits) and in turn, enthroning himself as king."

In a piece co-written with human rights activist Aaron Rhodes and shared with CNN ahead of publication, Yang added that "the nationalism on display on October 1 in Beijing is an aggressive assertion of ethnic and cultural superiority driving a mission to dominate and exploit lesser nations of the world, led by a personality cult, and with the military and economic might to succeed. "

"The Tiananmen Massacre ripped the revolutionary facade (from the Communist Party's) Marxist ideology, and forced the Party to rely exclusively on two sources of legitimacy ... high-speed economic development and nationalism," Yang and Rhodes write.

"More than ever, Xi must rely on nationalism to ensure political stability and the legitimacy of the regime." 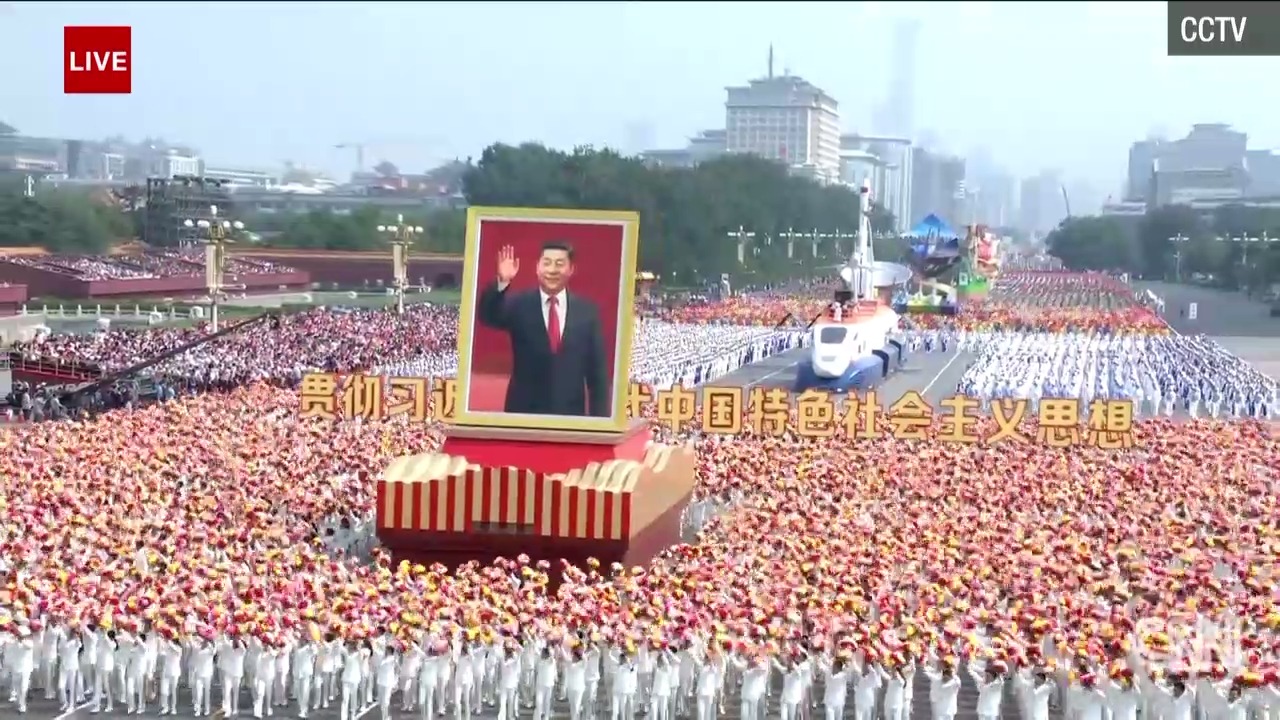 The parade so far has featured the giant portraits of past Chinese leaders like Mao Zedong and Hu Jintao. Now, it's Xi Jinping's turn.

The current president stood watching from above as his portrait was carried through the wide Chang'an Avenue by thousands of red-clad marchers. 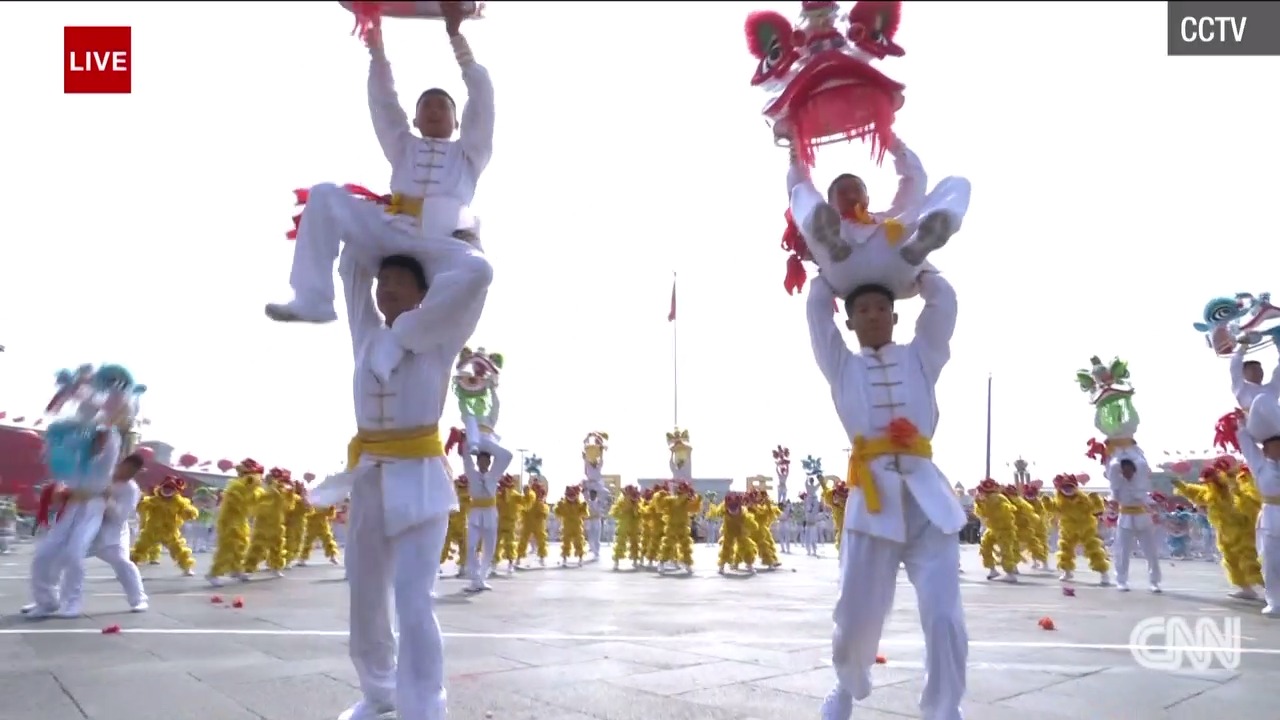 After the portraits of former leaders and floats made their way down Beijing's Chang'an Avenue, dancers and performers took to the wide street. 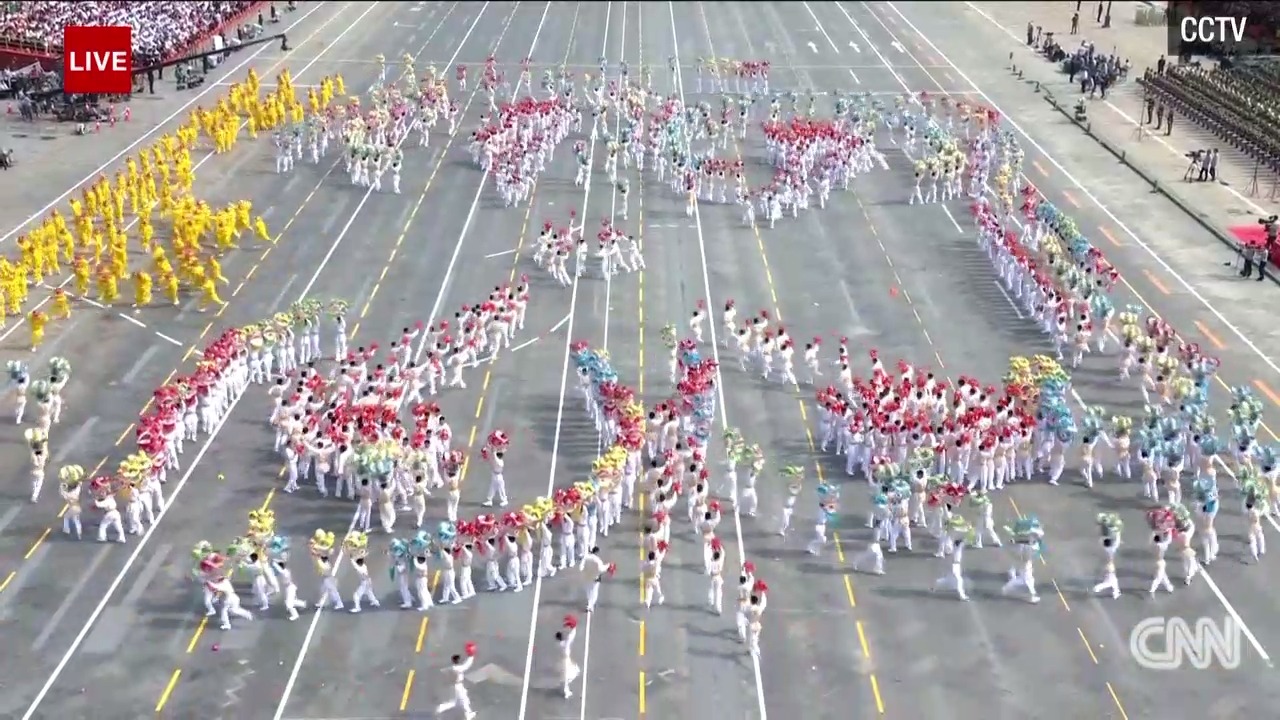 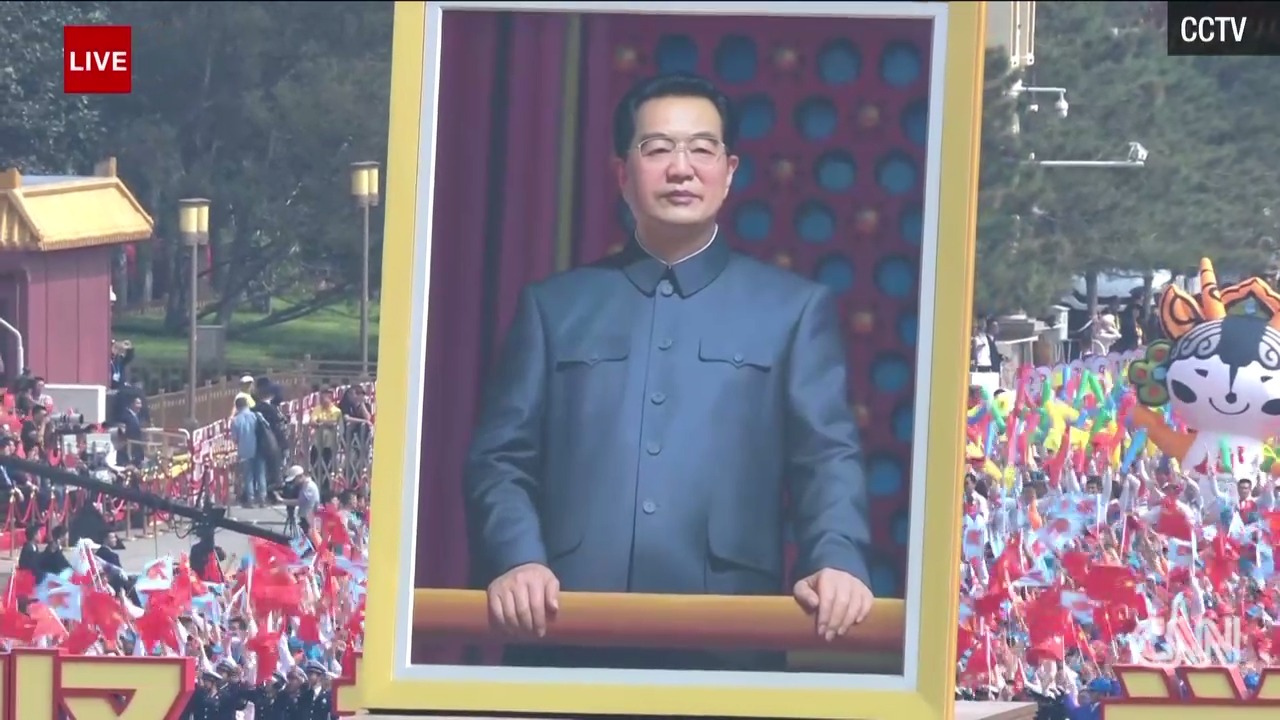 Former Chinese President Hu Jintao is the next leader to have his giant portrait carried down Chang'an Avenue as part of the ongoing celebratory parade.

Hu Jintao was the last president before Xi Jinping took office. Standing on the rostrum alongside Xi, Hu could be seen with gray hair -- unusual for China, where even most elderly leaders typically dye their hair black. 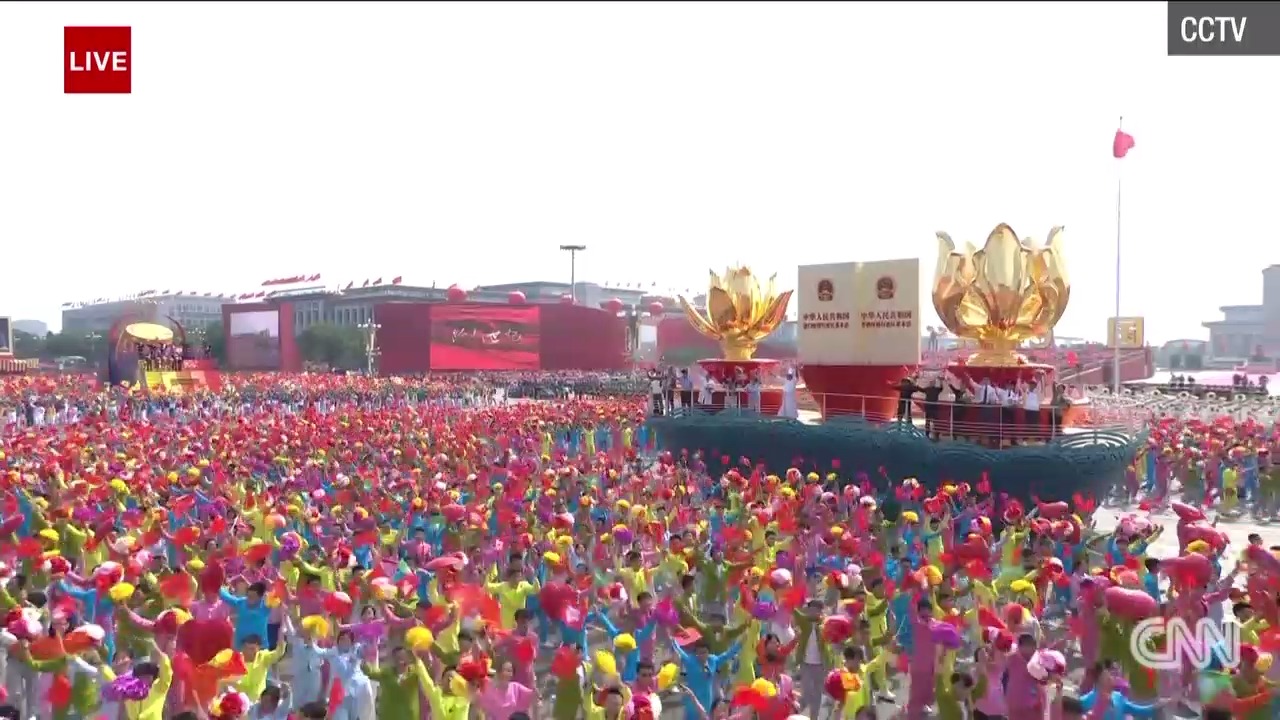 A large float displaying mock ups of the Basic Laws of Hong Kong and Macao has gone by, with signs reading "Hong Kong's Tomorrow Will be Better," and the same for Macao. According to state TV, the float represents "One country, two systems," the system by which Hong Kong, Macao ... and Taiwan are to be governed.

That might be something of a surprise to the people of self-ruled, democratic Taiwan.

While "one country, two systems" has always been seen as a possible model for the unification of Taiwan with China, its failure in Hong Kong -- as seen by months of violent protests in the city -- has taken what little sheen it might have had off.

Taiwan's President Tsai Ing-wen has promised that Taiwan will never accept "one country, two systems," and even the nominally pro-China opposition Kuomintang has come out against the principle. 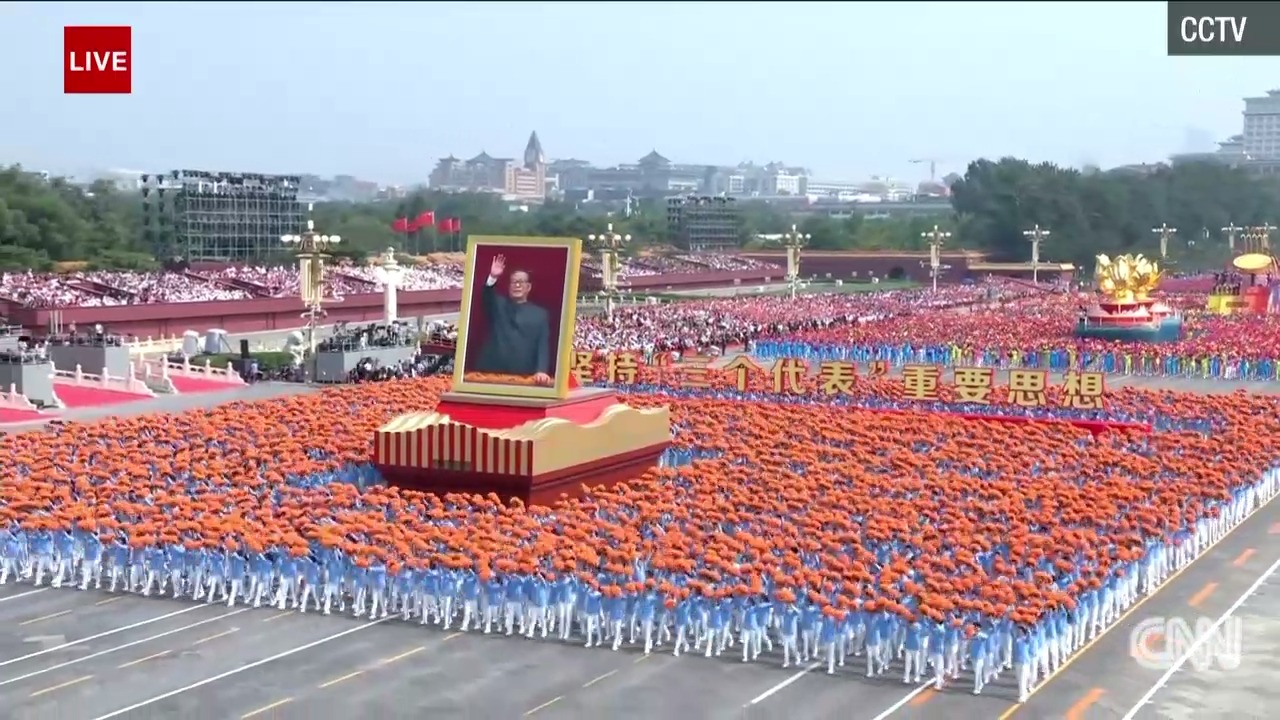 Former president Jiang Zemin is the next to have his giant portrait carried down the avenue, following the portraits of Communist leader Mao Zedong and reformist leader Deng Xiaoping.

Jiang Zemin watches the procession from above, seated next to Chinese President Xi Jinping. 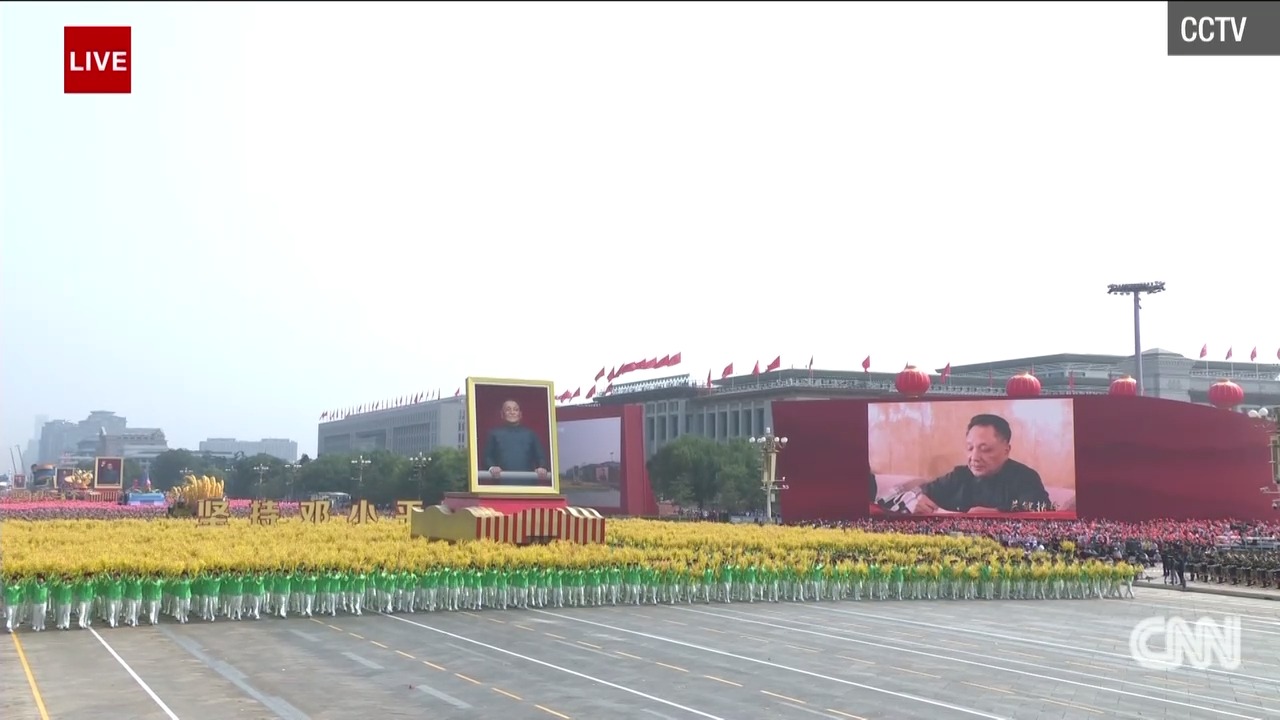 After carrying a giant portrait of Communist leader Mao Zedong earlier, now marchers are carrying the portrait of reformist leader Deng Xiaoping, often lauded as the man behind China's economic opening up and progress. 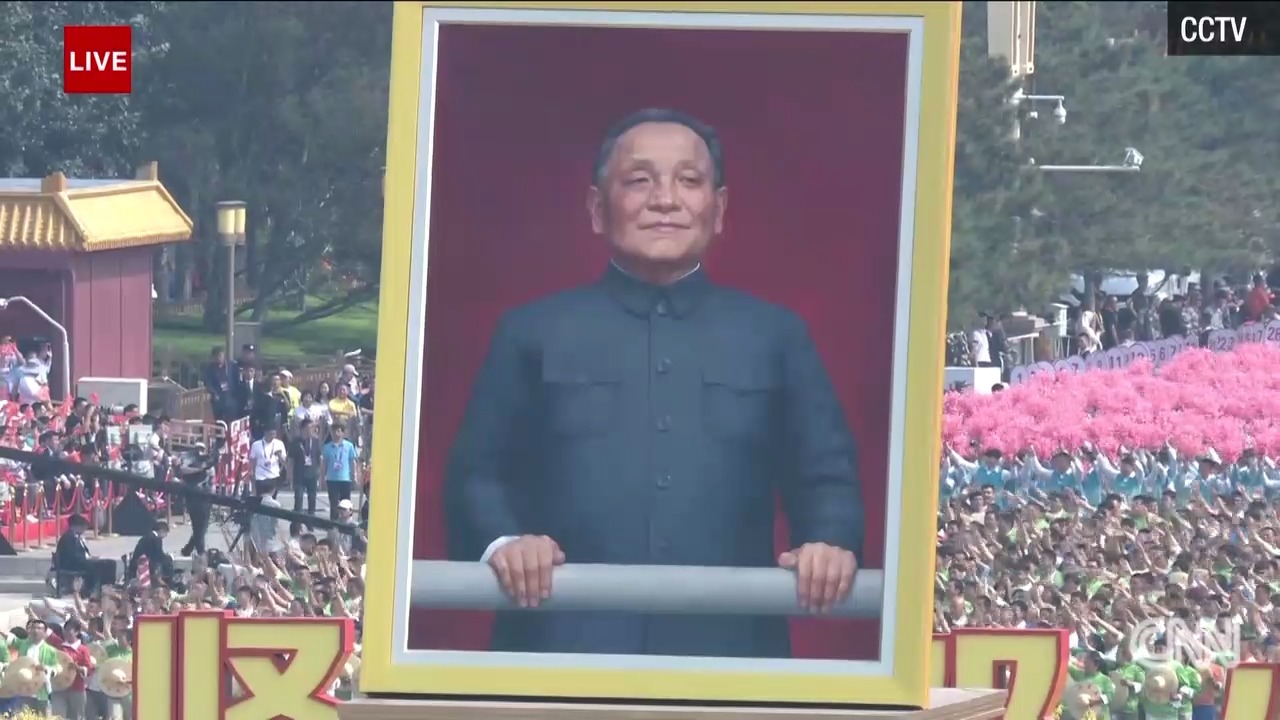 In the parks and streets of China's capital, people have stopped what they're doing to sit and watch the parade.

Some are just sitting on their bikes on a side street, glued to their phones. 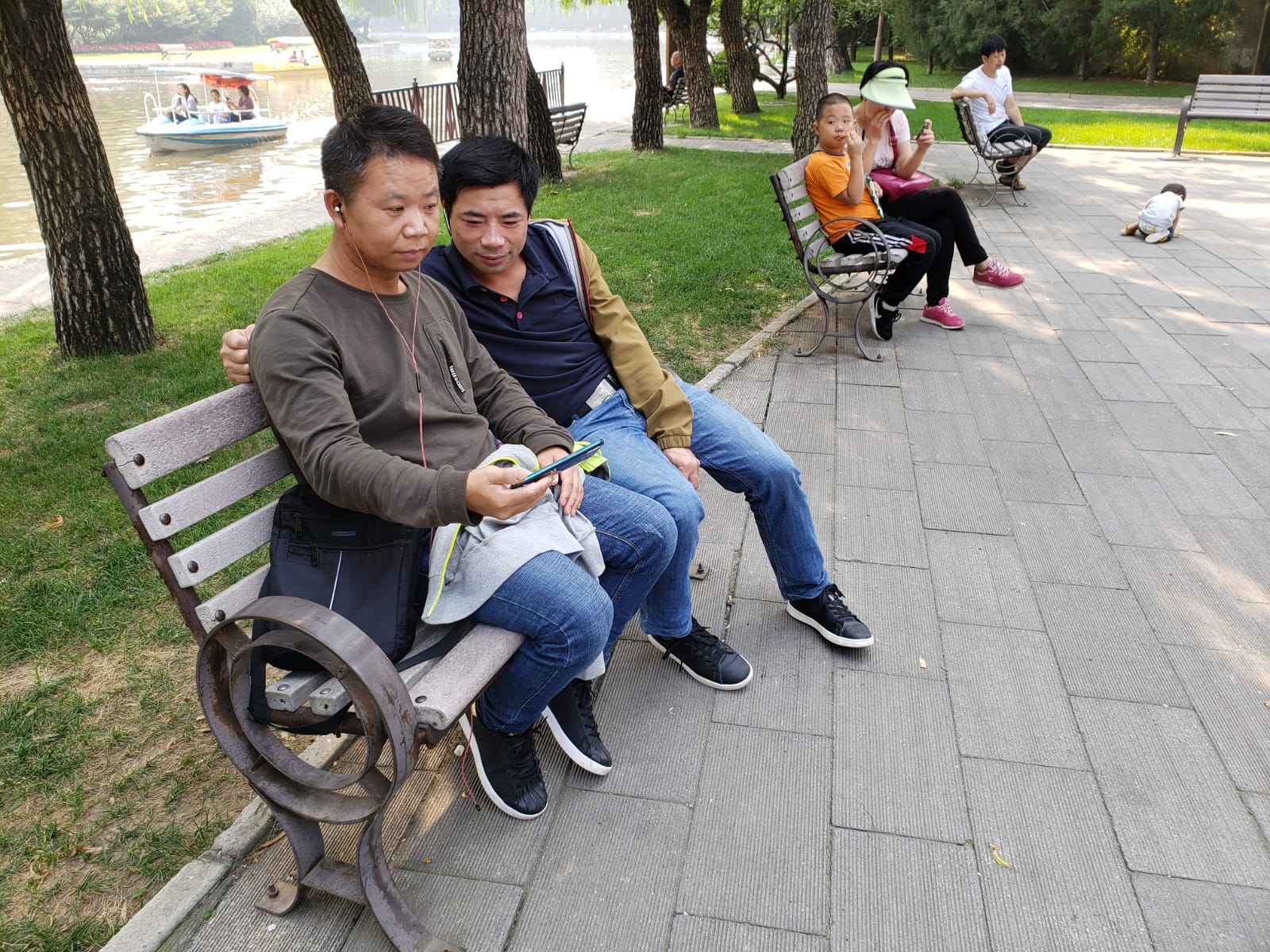 One Sichuan tourist, who asked not to be named, was watching with his friend in Tuanjiehu Park, just outside the city center.

He said he didn't want to watch in his hotel. So far he said he was very impressed

One dad, surnames Feng, who didn't want to his young daughter watch TV took her out to the park while the parade was on. But he watched on his phone the whole time.

"It's important for her to know what's going to today, and I'll tell her, but she's too little to understand," he said

Seated alongside Chinese President Xi Jinping on the rostrum, and looking all of his 93 years, is former leader Jiang Zemin.

The first non-revolutionary leader of China, Jiang oversaw much of the reformation of the country's economy begun by his predecessor Deng Xiaoping. He also oversaw the 1997 handover of Hong Kong from British to Chinese control, and the 50th anniversary of the founding of the Party.

While he officially stood down as President in 2003, Jiang retained power well into the rule of his successor Hu Jintao, and his influence arguably did not fully wane until Xi himself took the presidency.

Jiang's death has been erroneously reported multiple times, to some celebration from critics of the former president who associate him with several human rights crackdown, in particular the campaign he launched against Falun Gong practitioners, essentially stamping out the religious practice in China.