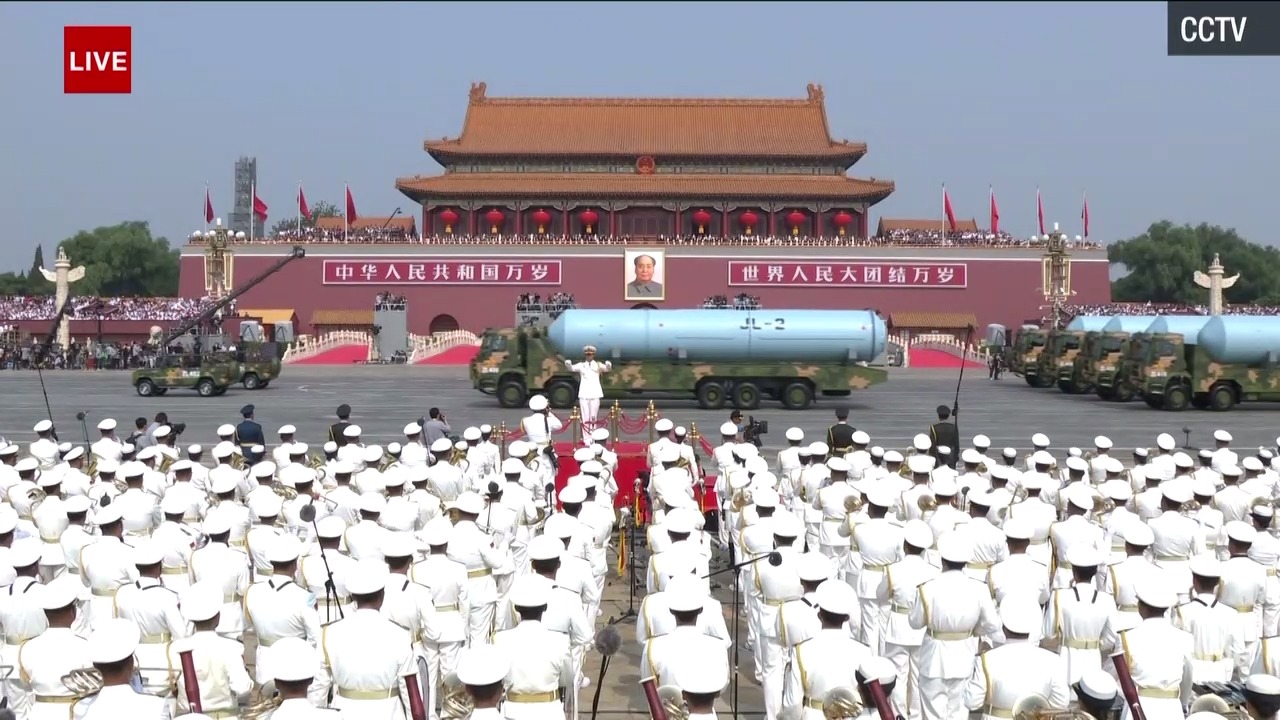 The main weapon aboard China's Jin-class fleet of nuclear-powered ballistic missile submarines, the JL-2 submarine missiles are parading down Chang'an Avenue. Four of the subs are in service, with two more under construction.

Each sub can carry 12 of the single-warhead JL-2 missiles. With an estimated range of 4,473 miles (7,200 kilometers), it is regarded as more of a regional than global weapon.

That range puts targets from India to Alaska in range from coastal Chinese waters, the BAS report says. But for it to threaten the continental US, for instance, the subs would have to get past formidable US anti-submarine choke-points around Japan and deep into the Pacific.

A longer-range SLBM, the JL-3, was reportedly tested in late 2018 and again in June this year, according to Jane's Defence Weekly, but that missile remains in development and it would be a surprise to see it on October 1.

Still, the Chinese SLBM force falls short of the United States. The US Navy's Ohio-class ballistic submarine fleet numbers 14, with each of those subs capable of carrying 20 Trident missiles. Each of those missiles can carry up to 10 warheads. 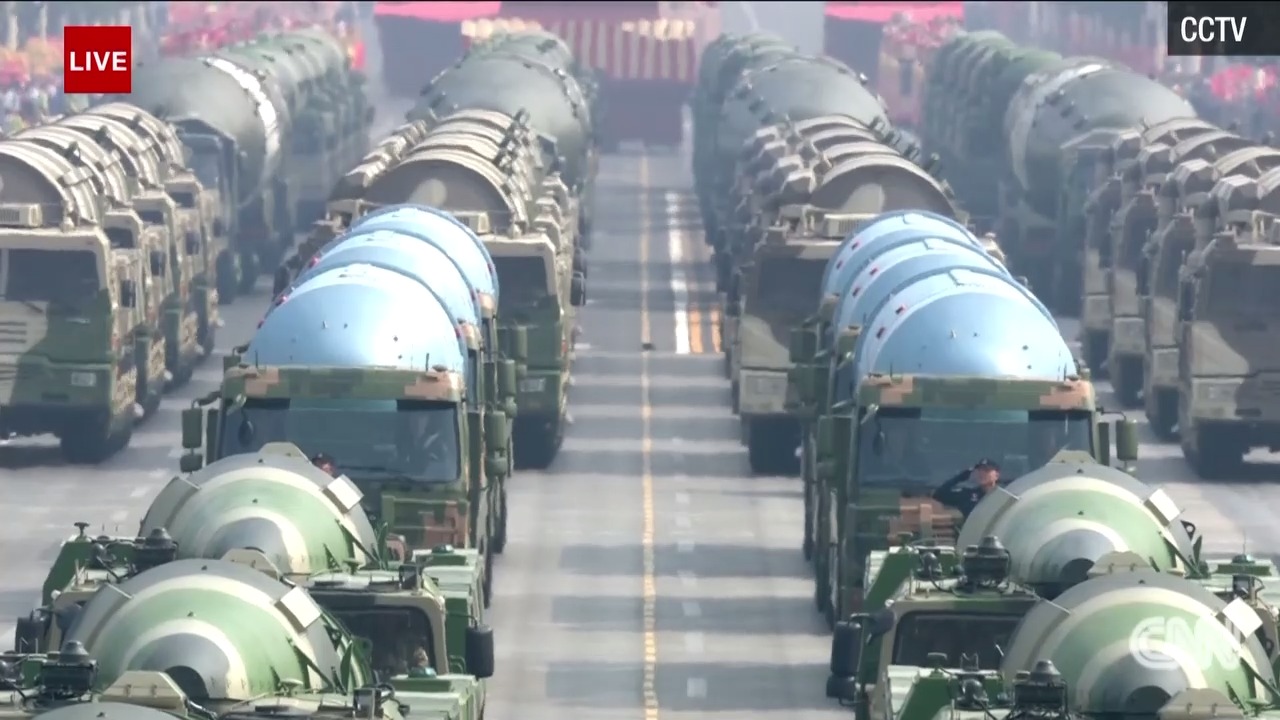 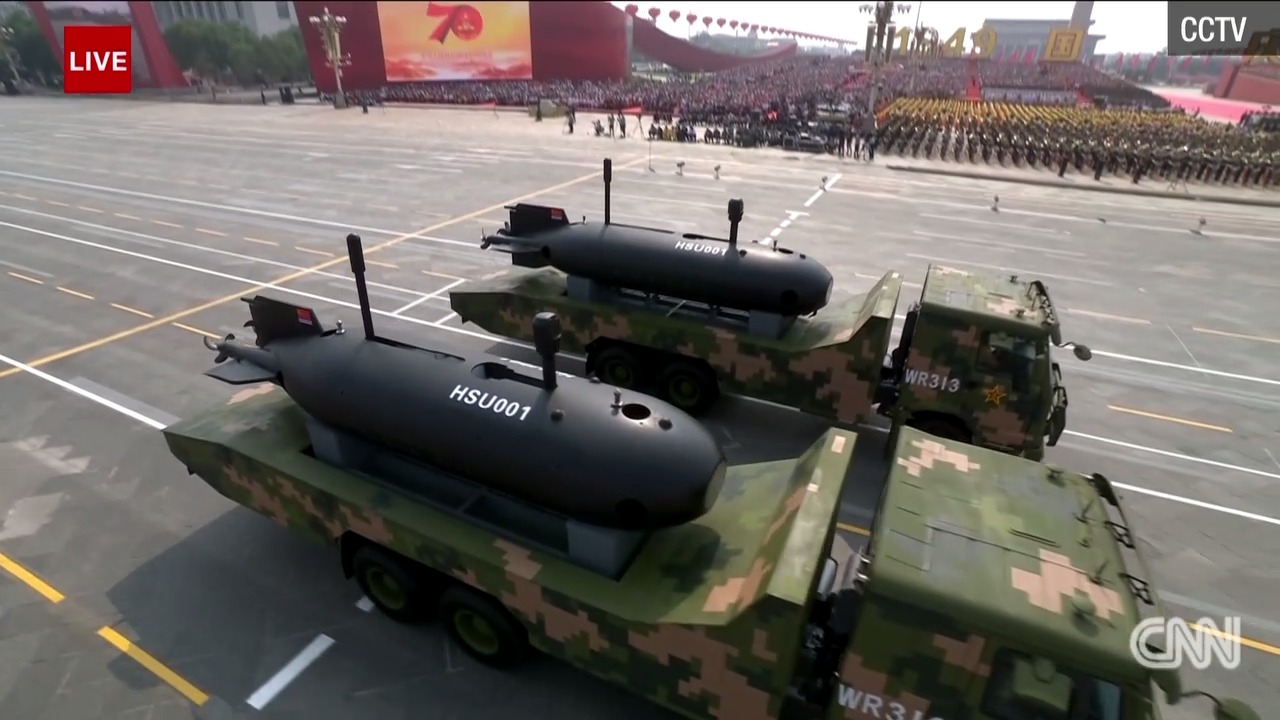 Along with traditional air drones, China has also paraded its underwater vehicles. The state-sanctioned Global Times noted its appearance in rehearsals, adding: "More mysterious was an image of a large autonomous underwater vehicle. Its mission remains unknown."

This could be one of China's first undersea drones. A 2015 report from the Rand Corp. think tank said the Beijing government, relying mainly on military funding, had set up at least 15 research teams at universities and institutes to develop technology for unmanned underwater vehicles (UUVs).

Speaking on the live broadcast, a state TV commentator said the underwater drone could "dive deep under the sea" to carry out surveillance and military missiles. 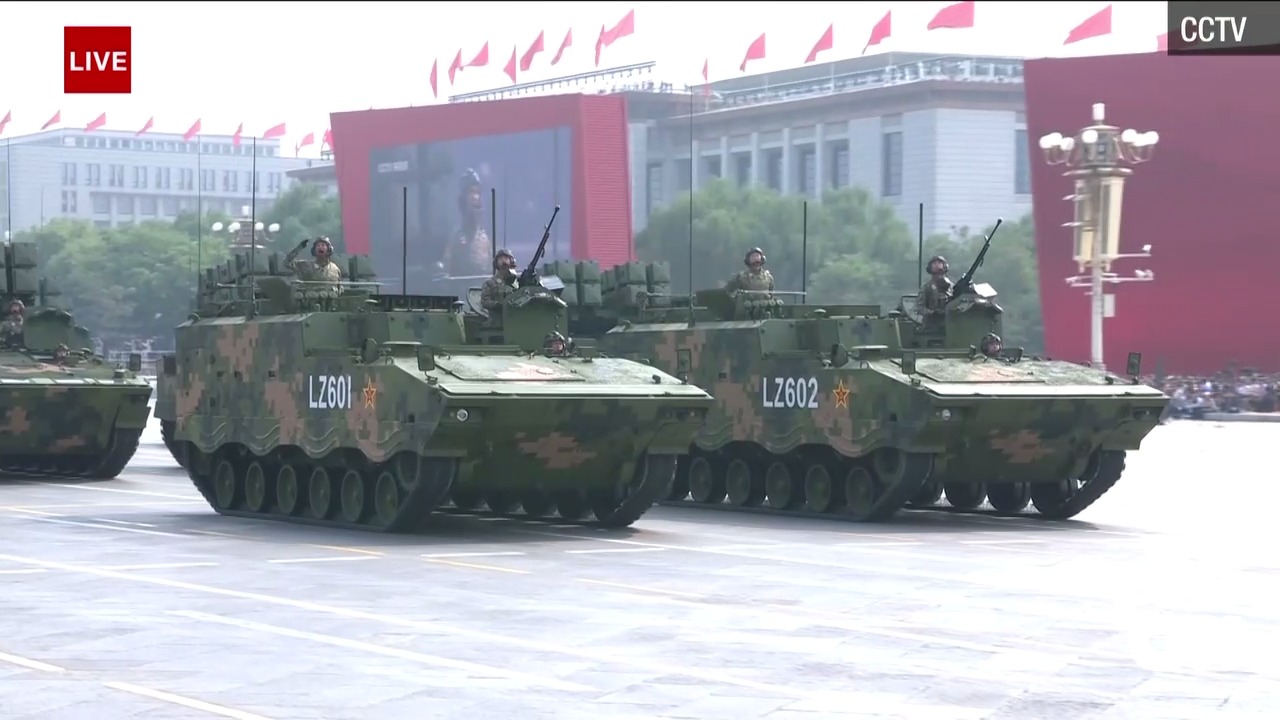 Military vehicles and tanks are being rolled down Chang'an Avenue in Beijing now.

The day kicked off earlier with a speech by Chinese President Xi Jinping, then a show of discipline and order from marching troops. 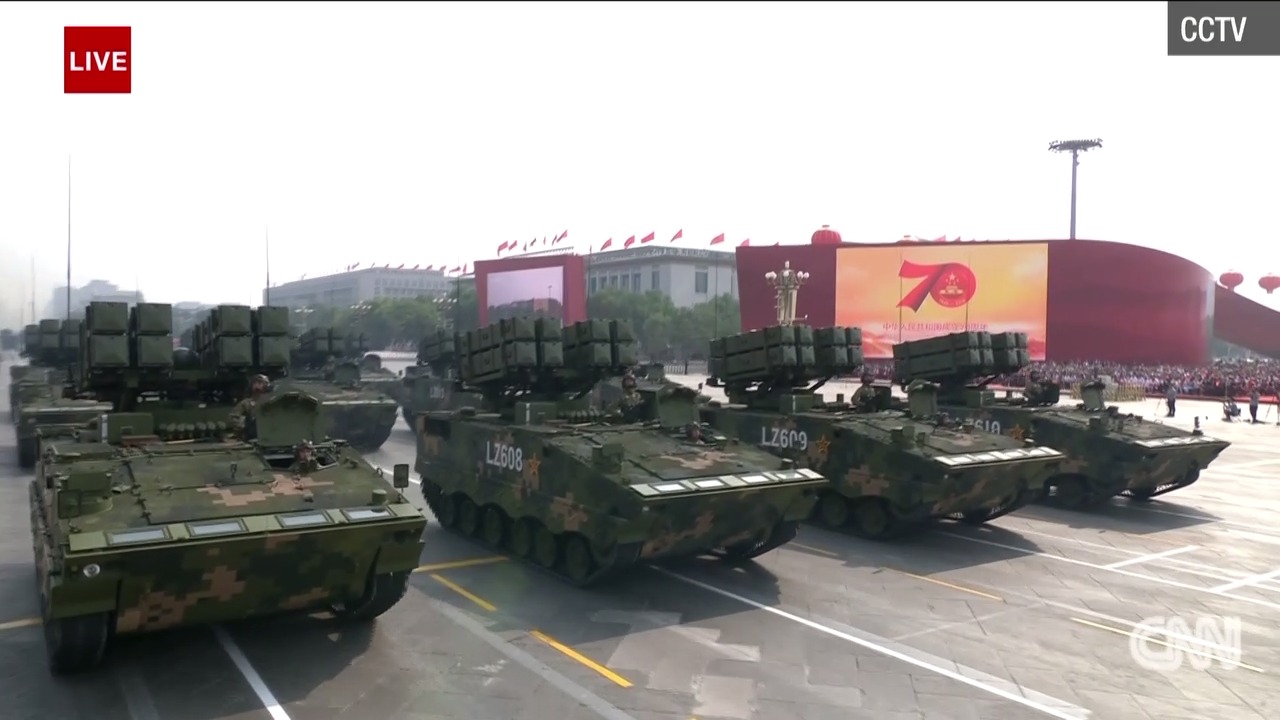 Now, lines of tank formations are rolling down the avenue in perfect straight lines.

There is speculation that there will be new, never before seen weaponry revealed today. 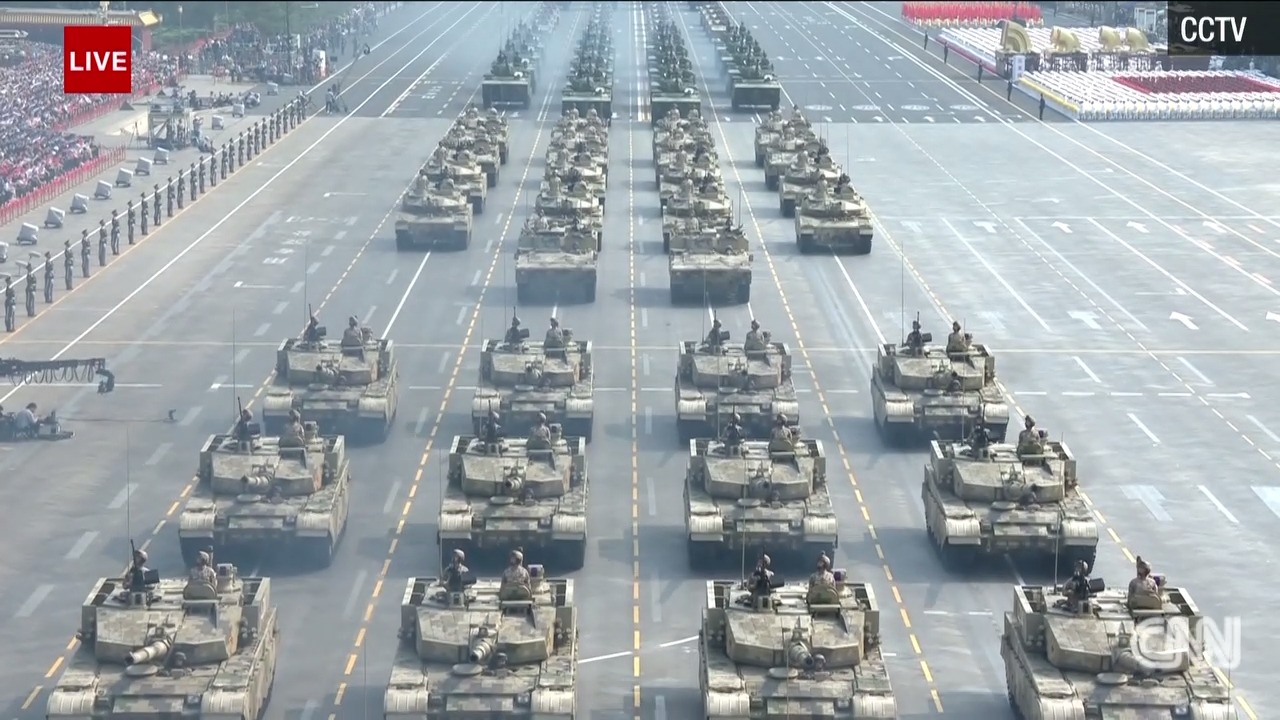 Today's military parade in Beijing is full of military might -- and it has the height requirements to match.

The age range of soldiers taking part is broad, from privates in their 20s to senior commanders who are over 60, according to Chinese state media Xinhua. 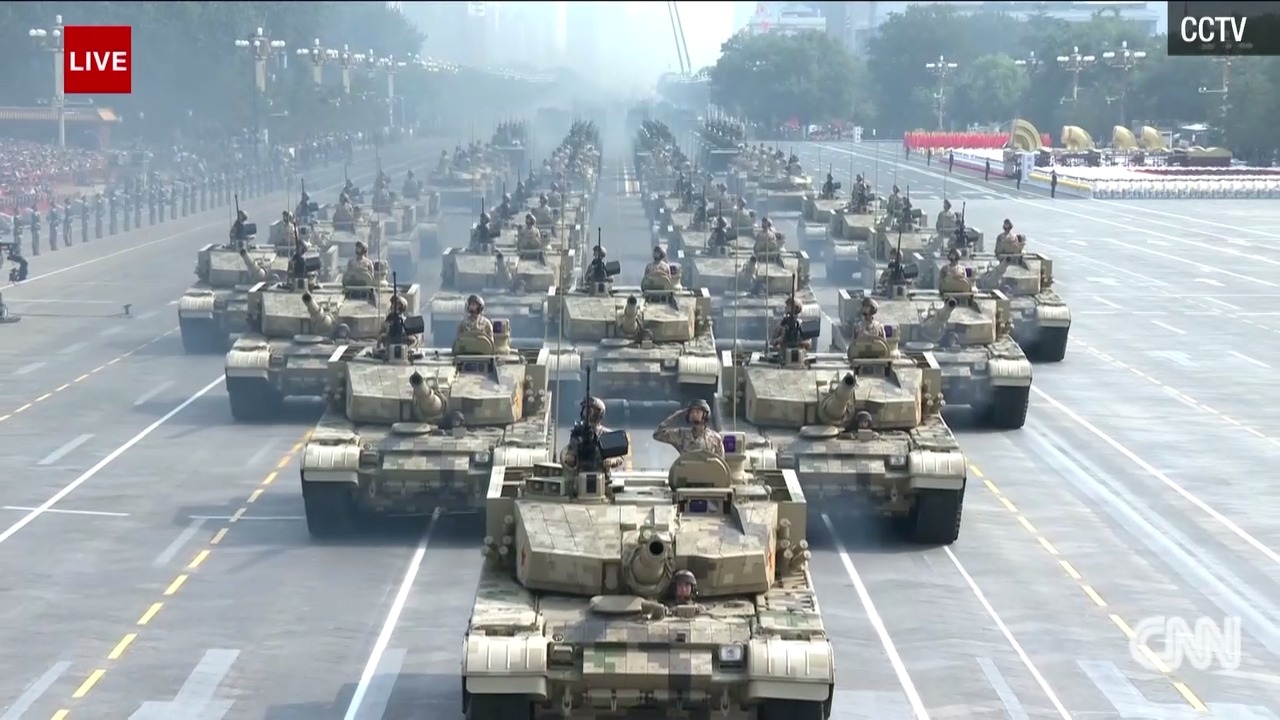 A large number of tanks are parading down Chang'an Avenue, ahead of other heavy weaponry, including what is expected to be some never-before-seen machines.

A story on the PLA's English website notes the parade would mark the public debut of the Type 15.

It also noted a change in the Type 99s, desert camouflage, which was "delighting enthusiasts who recalled the jungle look of previous parades."

There was no indication as to why the camouflage scheme was changed, but it prompted speculation about whether China sees a new mission for its ground forces. 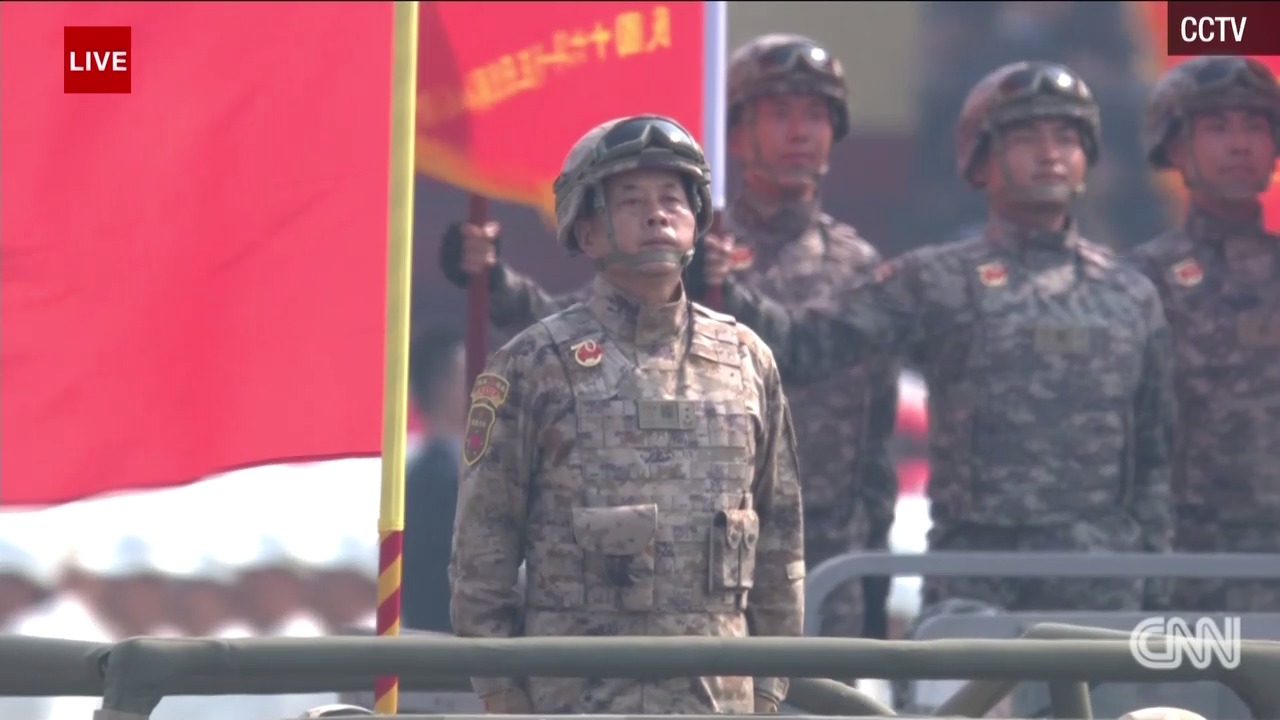 China is flexing its military might with the parade right now -- reminding viewers that it has the world's largest standing army and world's third largest air force.

Since 2014, China has launched more submarines, warships, principal amphibious vessels and auxiliaries than the total number of ships currently serving in the navies of Germany, India, Spain, Taiwan and the United Kingdom, according to a 2018 report by think tank IISS.

The parade will involve around 15,000 personnel, according to state-run news agency Xinhua. It also features more than 160 aircraft and 580 pieces of equipment, alongside 59 formations and a military band

Viewers worldwide are also keeping an eye out for new weaponry that may be revealed. Experts have speculated that these weapons may make an appearance:

Read here for more on the weapons, which may also include drone submarines and tanks.

Every time Chinese state TV coverage cuts to the Tiananmen rostrum, from where the country's current and former top officials are watching the parade coverage alongside President Xi Jinping, it serves to emphasize just how homogenous recent generations of Chinese leadership have been.

Very few women are visible on the rostrum, because there are very few women at senior ranks within the Communist Party. The People's Republic of China has never had a female president, nor have any women served on the Standing Committee, where all key decisions about running the country are made, since the party came to power in 1949.

The next rung down -- the 25-member Politburo -- previously had only two female members. Since 2017, however, it has only had one, Sun Chunlan.

While Hong Kong is led by a woman, Carrie Lam, who is in Beijing for the celebrations, she was nowhere in sight, as her rank is far lower than those on the rostrum. Her male predecessor, CY Leung, is up there, however, as he is now vice-chairman of the National Committee of the Chinese People's Political Consultative Conference. 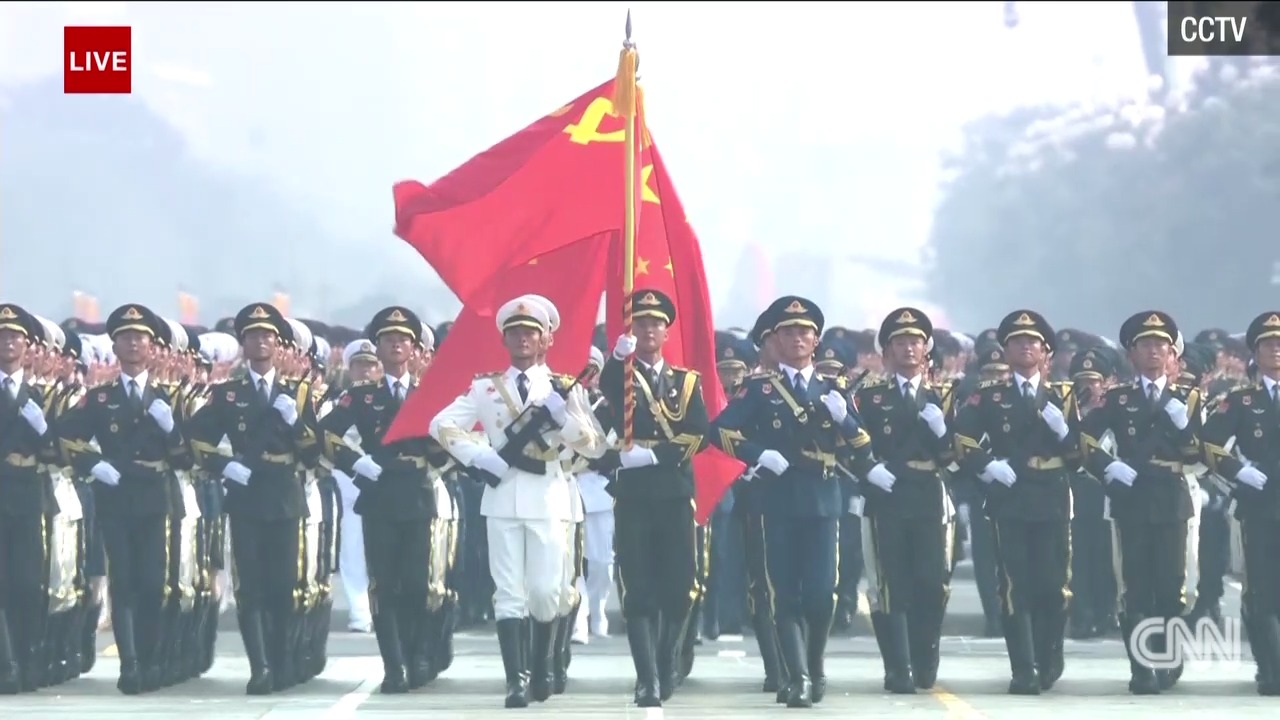 The military parade is making its way down the wide avenue in Beijing, with neat rows of troops from all three branches of the military marching in perfect unison, heads all facing the exact same direction. It's an impressive show of discipline -- and it reflects the hours of preparation and rehearsals that came before the big day. 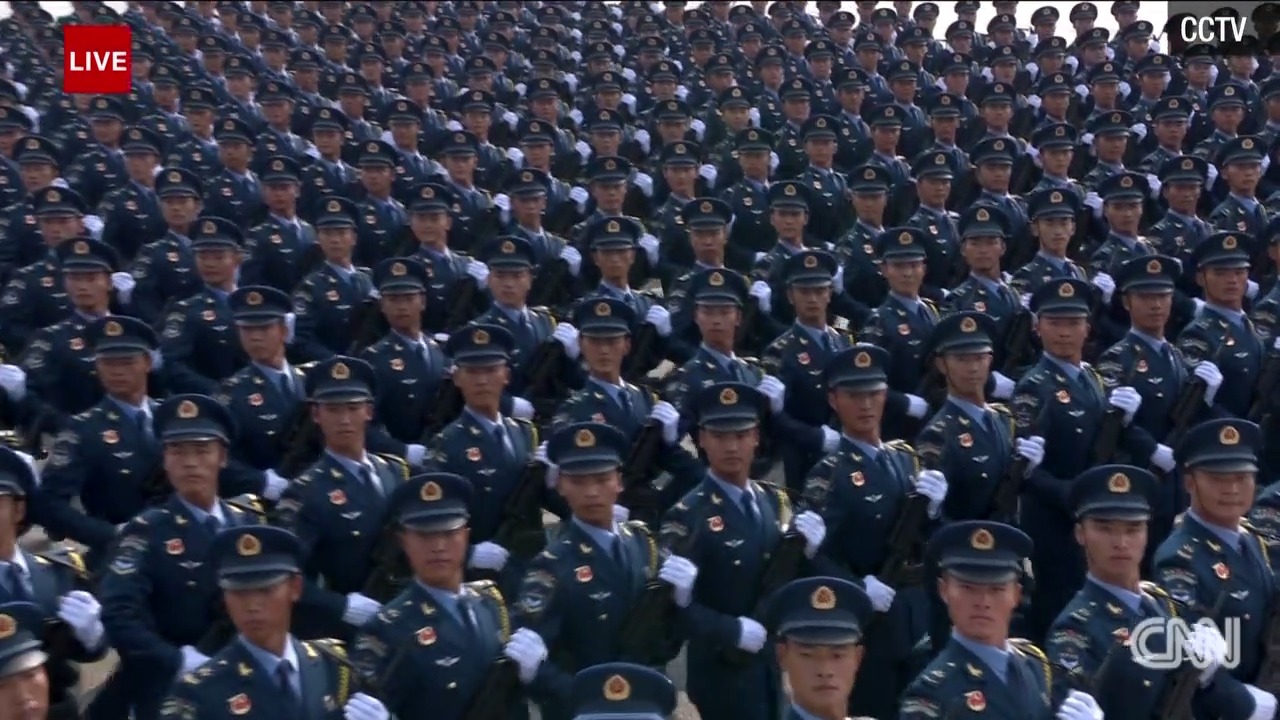 The marchers are composed of many different military bodies, including the Strategic Support Force, the Air Force, and the People's Liberation Army Armed Force, and more.

Nearby, crowds wave flags and cheer as the parade passes by. 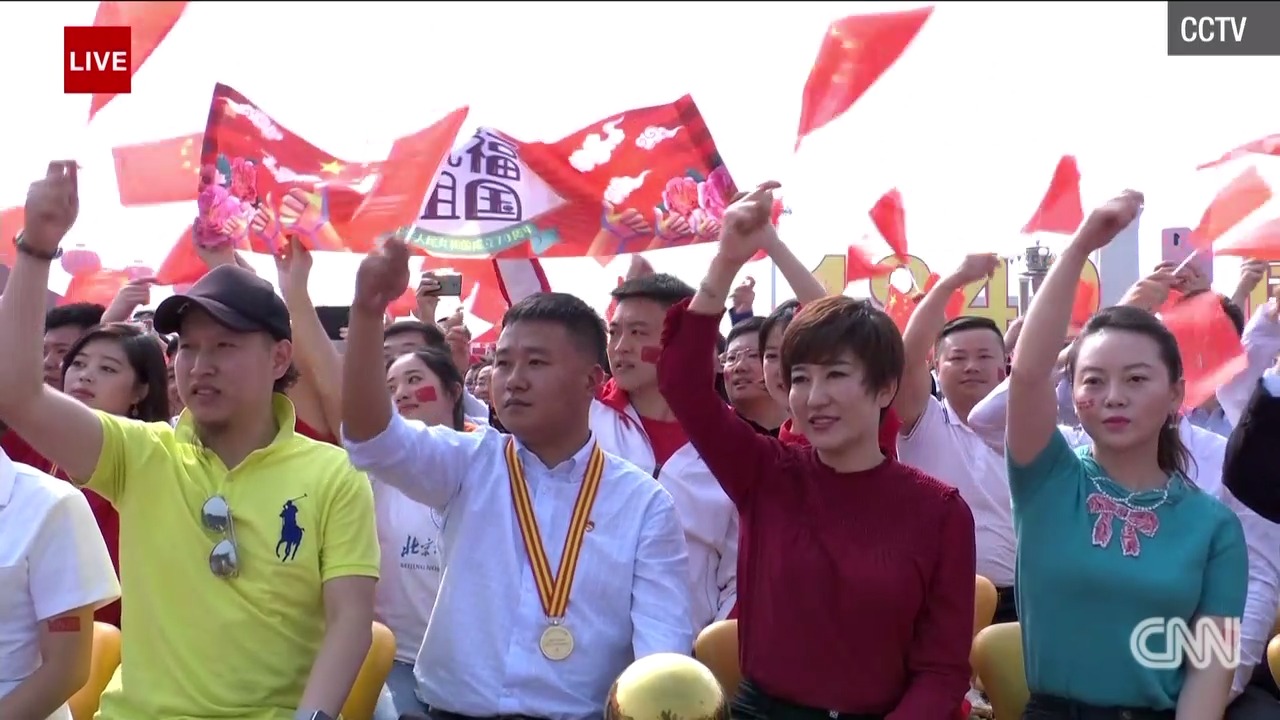 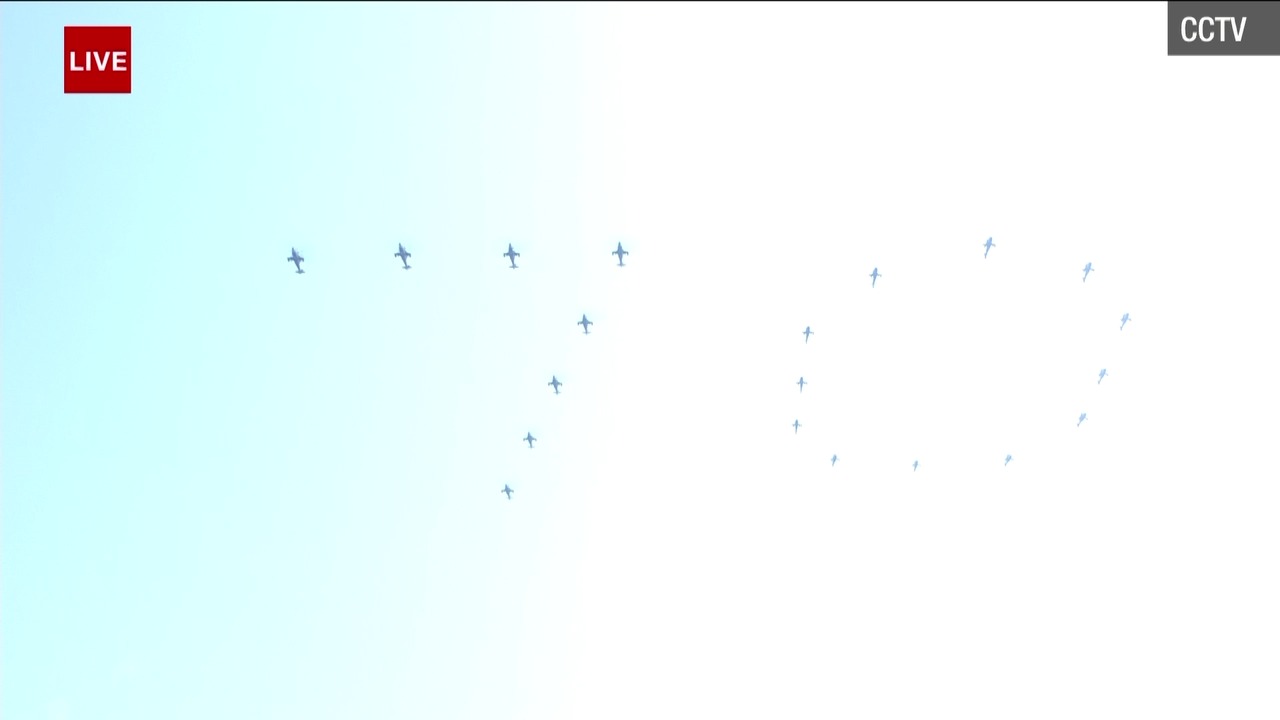 The air show is underway, with helicopters flying national flags across the sky above Beijing.

More aircraft followed, flying in formation to create a "70" in the sky -- in honor of the 70th anniversary of the People's Republic of China today. 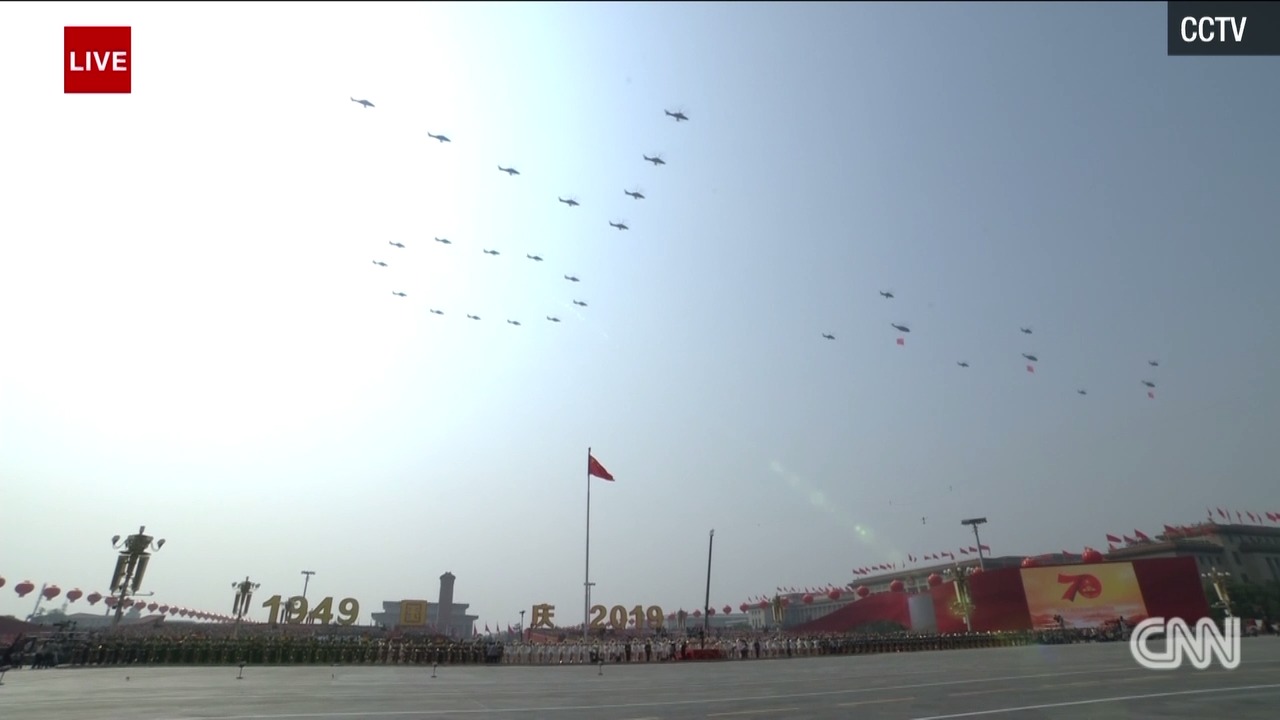